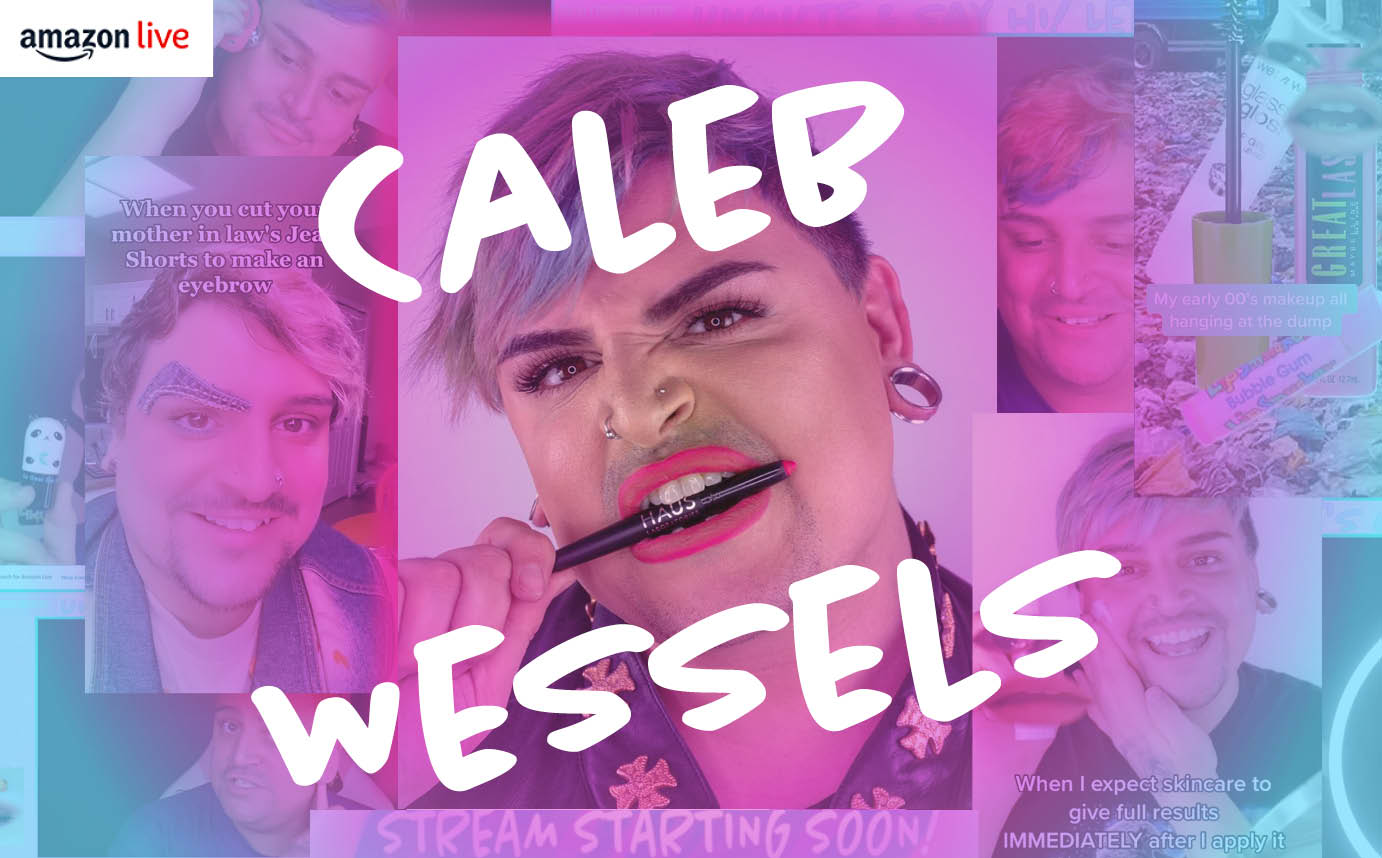 It was thanks to Buffy the Vampire Slayer that Caleb Wessels first stepped into a makeup classroom at Blanche Macdonald. Though he was led there by gore and effects, it was the world of Fashion Makeup that Caleb gravitated to most. Makeup had long been Caleb’s way of hiding — an angsty teen diagnosed with Autism at age 11 — and it as turns out, Makeup was also his path to self-discovery. Since finishing the program, Caleb’s Makeup career has soared. He’s held a place on the original Shopper’s Drug Mart National Makeup Artistry Team, “Shoppers Beauty Pros” — where he was even able to fly to Toronto and do commercials with them! He’s also worked as a Makeup Artist for Smashbox, as a Freelance Artist, and often works as the Key Makeup Artist for his partner Evan Clayton’s fashion shows. Most recently, Caleb has become one of Amazon.com Live’s A-List Influencers. He’s even got his own merch! Lucky for us, Caleb is an open book and willing conversationalist who’s more than happy to dish on life as an influencer, how it all works, and his top-selling tips. Meet Caleb!

Initially, when I started wearing makeup I was using it almost to hide myself and my insecurities—there were many. I was diagnosed with Autism when I was 11, and it was really hard to pull out of the stigma for a long time.

Let’s start with a bang. Tell us everything about your influencer position with Amazon Live!

In February of last year, I was approached—they had found me on Instagram—to test a Beta program they’d started. They’d started a platform that was expanding into beauty and all this different stuff. Initially, I was kinda like, “OK this seems interesting,” but I never thought it would come to be an actual income for me. I did a lot of research before I accepted the offer. The more I learned, the more I realized how innovative their platform was and how this was very likely going to be one of the big things in the future of beauty and makeup, so I jumped in! The pandemic happened a month later, so the timing literally could not have been better for me.

“ I played with Makeup for years and put it on my friends, and then one day, it just kind of clicked that it could be a career.”

So what does “going Live” entail? How many viewers do you usually get?

I go on and do my Makeup live and talk about the different products I’m using. It’s actually still a lot of selling and talking about things in the context of other people’s skin or comfort with product application, colours, etc., so a lot goes into every single Live I do. It’s so fun and cool compared to Instagram, though. It offers a lot more people to interact with because people can chat with you while you’re Live—though you do get a lot of ghost watchers! My audience count ranges pretty heavily depending on the day, but it usually starts around 40-50,000 total views per stream but has gotten upwards of 120,000 total. Though as of yet, the most I’ve ever had watching concurrently is 600-700 since a lot of people tend to jump in and watch for 30 seconds and leave haha! Society’s attention span nowadays is so small!

When I first started, it was around 5,000 total viewers, and like 20-50 concurrent, so it’s flown up a lot over the last year. In the past, I’ve made the mistake of going live when Amazon is doing an event, and I’m still having flashbacks to those days—never try to compete with JLlo Beauty Livestreams because you will not win. Live is only available on Amazon.com right now, but I am hoping they expand to .ca at some point —Canadians always seem to get everything last haha.

How cool! And you’re an A-Lister, too! What are the perks, and how do you get to be an A-Lister?

​​Yes! I’m an A-Lister, which is the top-tier of Amazon Live. It means that when I go Live, I’m on different product pages, the home page and featured on the pages of similar products to the ones I’m using.

A-Listers also have the added benefit of pushing lower-tier streamers off product pages, so more eyes are on us. It also means that I get products sent to me to try and demonstrate and am given advance notice about certain deals/sales so I can prepare my streams—littered with NDAs, of course!

Anyone can apply to be an Amazon Influencer now, and you start as a Rising Star, then you work up to an Insider, and then an A-Lister. When they push you to A-List status, they look at your sales, your interaction rates, how many people press the star button—all those types of metrics. They want good content on their platform, of course, but sales will always be the Great Divider. Lucky for me, I’ve had so much sales experience; it’s just in me now.

“Anyone can apply to be an Amazon Influencer now, and you start as a Rising Star, then you work up to an Insider, and then an A-Lister.”

Can you give insight on how you approach sales and some of your top tips?

I’d say almost everything I learned about sales, I learned during my time in the Beauty Boutique at Shoppers Drug Mart. I was also lucky enough to have Shannon Hoover, Western Smashbox Rep at the time, take me under her wing and really train me well. She really helped me learn sales techniques and hammered into me the importance of gaining a client’s trust and being myself. She was the best type of boss you could ever have, and I miss working with her!

No matter where you are, the same principles apply, and it’s still work. So I talk while I do my makeup, and I like to keep things fun, but my number one rule is honesty. You never want to break the trust of your clients, viewers, followers, whoever you’re speaking to, or they don’t come back. Even with the volume I see now, I still have regulars, and I’m always truthful about products. It’s hard to describe because I just get in the flow and start my Makeup and GO! But basically, I talk like I’m talking to a friend. If you love something, what’s the first thing you do? You tell your friends about it! Even if we don’t need to, or they don’t care, LOL. But if you’re trying to hone your selling skills, think of it like a friend you’re sharing something with. That way of speaking and information sharing serves you so well in retail.

“You never want to break the trust of your clients, viewers, followers, whoever you’re speaking to, or they don’t come back.”

How many times do you go Live a week? Do you have to do it on a schedule? And what products can you use?

It’s very open. You can go Live pretty much wherever you feel like it. I did make a schedule and give it to them so that it’s easier to promote me. I’ve got that set schedule, and then depending on the week, I’ll pepper in some other random Live times throughout. I’d built up a good following on social media already and been able to do things like things going to New York City to film with MILK MAKEUP—so I knew consistency was part of the key to success with Amazon, too. When you’re going Live, you can use any product you want as long as it’s on Amazon.com. And the .com is verrrryyyyy different from the .ca. They have CoverFX, Anastasia Beverly Hills, Stila, Kevyn Aucoin, Boscia, Foreo, and Peter Thomas Roth and these ones are direct from the brands now, rather than third-party sellers! Just always makes sure it ships & is sold from amazon.com OR says ships from Amazon.com and sold by “insert brand name” to make sure it’s the actual brand selling it!. Sometimes I have sponsors for my videos, so that will dictate what products I use, but the rest of the time, it’s just me rolling with it and eeny, meeny, miny, moe-ing a palette and getting to it!

Though you’re a Fashion and Beauty Makeup Artist now, that wasn’t what initially led you to Makeup, was it?

No! I went because I’m obsessed with Buffy the Vampire Slayer, so I wanted to do all the SPFX and TV & Film classes. After the first day of SPFX, I was like, “I hate the feeling and textures of this. I want out!” I think it was due to my Autism really disliking some of those textures! I like the looks, and I don’t mind doing it on occasion, but it’s not something I would ever want to do full time. I liked proms and retail and weddings, and I do not like SPFX at all! Not only that, the schedule you need to keep to work in that field makes absolutely no sense to me. Like being on set at 3 am!? I can’t even comprehend that tbh.

How was your time in the Makeup Program at Blanche Macdonald?

I loved it. When I walked into Blanche Macdonald for the first time and told them that I loved Buffy so much, and then they told me that Todd McIntosh—the Makeup Supervisor for the whole show!—was the Makeup Director, and it just seemed meant to be and the exact place for me. I still talk to Heather Sosa when I’m applying for things and building my resume. She’s always there for me, even all these years later, not just willing to help but wanting to.

Blanche has really exceeded my expectations for how much they support me even all these years later.

Did you always know you wanted to be a Makeup Artist?

I started using Makeup when I was a 14-year-old scene/emo kid with shaved eyebrows and blackened eyes. I played with Makeup for years and put it on my friends, and then one day, it just kind of clicked that it could be a career. And then, of course, my secret obsession with Buffy the Vampire Slayer because at the time, I wasn’t allowed to watch it. Initially, when I started wearing makeup I was using it almost to hide myself and my insecurities—there were many. I was diagnosed with Autism when I was 11, and it was really hard to pull out of the stigma for a long time. I used makeup almost as a means of escaping reality at times. Now I like to make sure people know it. It’s in my Instagram bio, even. I’m not hiding anymore. Of course, now that I’m older I manage a lot of aspects of my mental health with medication. But honestly, I am so happy I am who I am because I look at things so differently from other people and have other skills that I’ve honed and built myself that have given me an incredible career.