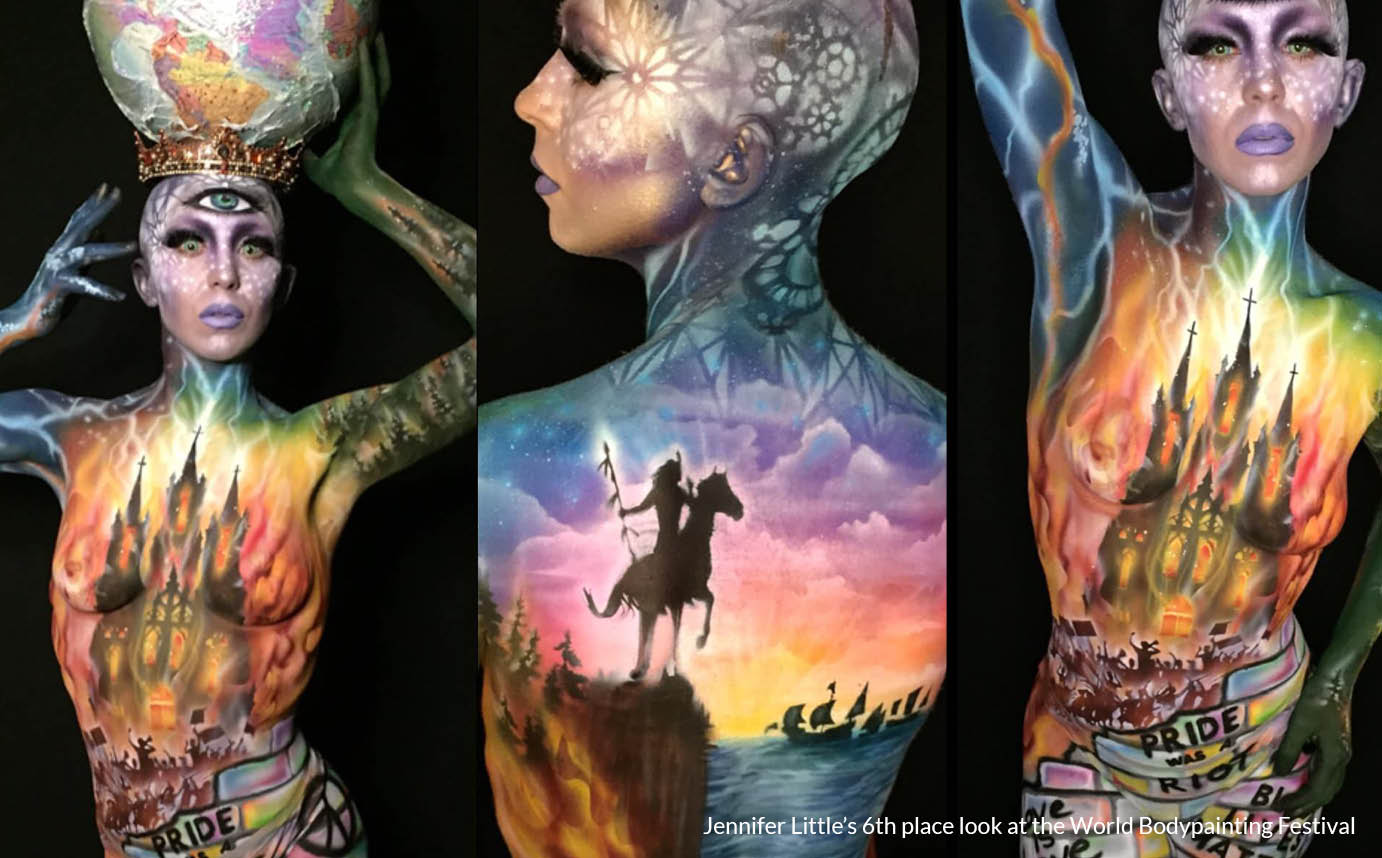 As one of Vancouver’s leading Bodypaint and Freelance Makeup artists, Blanche Macdonald Global Makeup program graduate-turned-instructor Jennifer Little has made it her job to boldly and creatively push the boundaries of beauty beyond the face, sparking engaging conversations in art, body positivity, and even animal rights.

She’s been published in Vogue Italia, worked as a Key for the Olympics in Whistler, awarded first, second and third place in multiple prestigious bodypaint competitions across the globe, and has been an Art Director and Judge at some of the city’s largest bodypaint events.

“I had always wanted to work with people. I’ve always coloured outside of the lines, if you will, and having a human canvas was very intriguing to me.”

While gearing up to compete in the World Bodypaint Festival in Austria in 2020, Jennifer was interrupted by the pandemic, halting both the competition and her plan to launch her in-house production company, GHOST COAST STUDIOS. Once the fall rolled around, Jennifer was back teaching the makeup artists of the future, part-time at Blanche Macdonald!

Jennifer Little has been making makeup magic for over 20 years, and she’s at it just as fiercely as ever before.

What are some things that you have to consider when working on such an intimate scale as a Bodypaint Artist?

You have to up your level of professionalism. Not all models or clients are comfortable in their own skin. It’s a very intimate service and people have to let their guard down right away. I try to set the atmosphere so that they’re as comfortable as possible: making sure they’re well fed, putting on easy music.

“Working for myself, doing what I want to do and having that creative freedom is an incredible thing. And having clients return to me year after year, event after event—there’s a lot of satisfaction in that too.”

Being bodypainted is completely liberating. I have seen people do a 180; from the booking process to having finished their appointment they are, to me, a completely different person. I’ve had people so happy and proud of themselves that they went through with this service that they cry. Having a bride cry because she’s so happy, feels beautiful, and emotions are running high is one thing, but having someone who’s closed-off or over-sensitive or self-conscious, and having them break out of their shell is another.

Congratulations on placing sixth in the world at The World Bodypaint Festival! Would you tell us about the process and your makeup concept?

Yes! So the World Bodypaint Festival had announced its ‘hybrid Covid edition 2021’, an online competition slated for an entire week in July. I was not about to let this one pass me by, so my model, Chelsea Brennan, aka Chelsea The Pale and I got to work! They kept the original theme planned for 2020, ‘Historical Moments’ for the Bodypaint categories and ‘Fashion Savages’ for the Creative Makeup category, which I was super excited about as I had already done a significant portion of my planning. However, so much had changed around the world in the time between cancelling the last competition and announcing this one that I couldn’t help but make a few changes myself. My original plan was pretty straightforward as far as historical moments go. Still, with all the major historical events happening in real-time in front of our faces, my concept rewrote itself.

My central theme was always the discovery of fire, a pretty monumental moment without which we would not be here today. Fire is also technically challenging to airbrush, so I hoped the judges would see my technical ability. I started from the feet and swirled up around the body, highlighting silhouettes of protesters through the ages, from suffragettes/women’s rights to LGBTQ and BLM. A brick wall wrapped around her hips representing the fall of the Berlin Wall to the artwork on the Lennon wall and, of course, Stonewall, which wasn’t a wall at all! Above that, I had forests and oceans on fire. The main element on the front of her torso was a huge church erupting in a fire. Her back featured an Indigenous warrior on horseback atop a cliff watching the first European ships sailing to ‘the new world.’ Underneath the cliff and in the not-so-distant future from those ships landing were piles of skulls engulfed in flames. Her face, Mother Nature, her head, Father Time, holding their world, wrapped in plastic, trying to save it from the fire.

To say this piece was politically charged would be an understatement, and I wouldn’t change a thing. The paint itself took eight hours. I’m honoured to say we placed sixth in the world! The Creative Makeup look took three hours, and we placed 16th! I hope to compete in person for 2022, but only time will tell.

“Bodypainting is a really good way to get a message across because you’re already engaging people’s attention with the fact that you’re working on a human canvas.”

How awesome! And what of GHOST COAST STUDIOS? Will that ever come to fruition?

I am still focused on developing my in-house production company and hope to have some very big plans and announcements coming in 2022! I’m so incredibly fortunate and grateful to be able to use my art to speak up for those in need and bring attention to social and political issues, all the while flexing my creative muscle and empowering my human canvases!