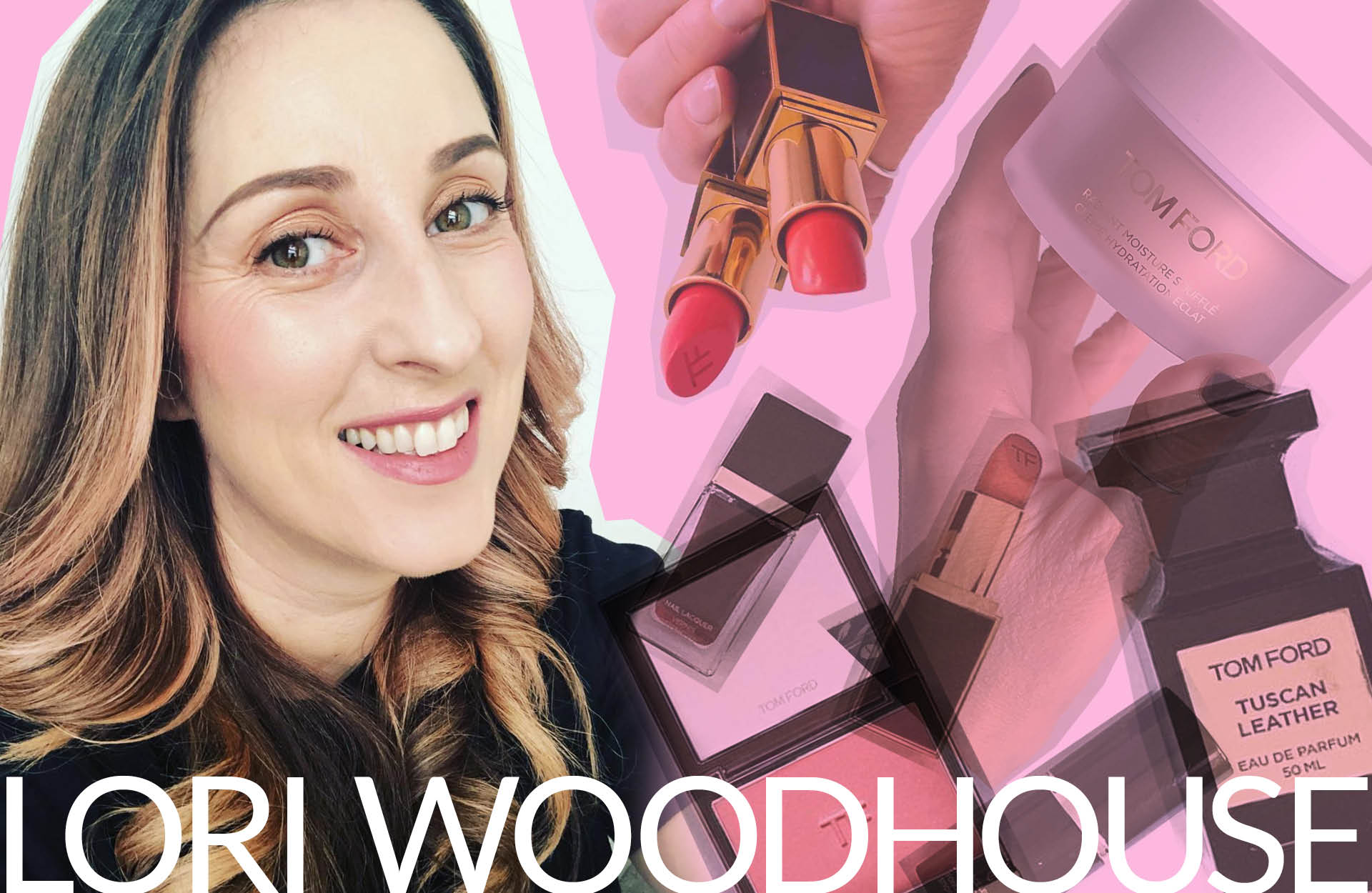 Lori Woodhouse was an aspiring hairdressing student in Victoria when a visiting Makeup Artist arrived to talk about opportunities in the TV and Film industry. That was all it took to convince young Lori that makeup would be her future, launching a career took her onto sets including Supernatural, Masters of Horror, and The Addams Family, before she moved to London, England to rise to the position of Director of Education UK and Ireland for Tom Ford Beauty, By Kilian, Edition De Parfums Frederic Malle and Le Labo. Her adventures in beauty have transformed Lori into an elite Makeup Artist; now her exhilarating career in makeup takes Lori around the world, but she still remembers the thrill when she first discovered where brushes and a new skill set could lead.

“This Makeup Artist had worked on The Scarlet Letter with Demi Moore,” recalls Lori. “It sounded super-exciting. I turned to my friend and said, ‘I’m going to be a Makeup Artist and work in film.’ She said, ‘Me too!’”

The move to Vancouver, and Canada’s top Makeup School, was inevitable.

“Back then everybody who wanted to work in TV and film also wanted to work at MAC. Most of the artists who worked at MAC went to Blanche Macdonald, so that was the school I knew I had to go to. It had a great reputation even back then. Learning at Blanche Macdonald was really powerful. My TV and film instructor had put the bruises on MacGyver. It was inspiring and amazing.”

As Director of Education for Tom Ford Beauty it’s my job to drive sales from an educational standpoint. I have a large team and I look after three fragrance brands as well as Tom Ford.

“MAC was opening up a counter at The Bay in Victoria and I was fortunate enough to get one of those jobs. Working in retail prepares you so well for working in TV and film. There’s nothing better than making someone feel really amazing about themselves. You have the opportunity to practice your skills. The more Makeup you do, the better you get.”

When the chance to enter the world of Film and TV arrived, this elite makeup artist was ready.

“People kept telling me that I needed to meet this Makeup Artist called Debbie Lelievre. She’d gone to Blanche Macdonald too. She phoned me one day out the blue. She was working on a film and needed an assistant that could do hair and makeup. I loved every minute of it and was asked to work on more shows after that. I loved working at MAC but opportunity was knocking. My boss was so great. He said they’d always be a place for me at MAC and that I should go follow my dreams.”

There’s nothing better than making someone feel really amazing about themselves.

Entering the TV and Film business, Lori understood that it paid to chase the work she wanted. A promise from Blanche instructor Michelle Pedersen wasn’t forgotten.

“Michelle said to the entire class, ‘If you ever want work, call me. If I don’t answer, keep calling.’ I kept calling and eventually had the opportunity to work with Michelle and Devyn Griffith doing day calls on the Addams Family. It was super cool doing Wednesday Addams’ makeup and powdering Uncle Fester, who was sweating up a storm in the heaviest coat imaginable. I didn’t care what I was working on. I just wanted the hours to be able to join the union.”

Lori built her hours to the point where she became a full IATSE member. Once word leaked out that she could do both makeup and hair, the work offers started pouring in.

“Anne Caroll, who was head of countless hair departments, called me for a TV movie called Best Actress. I told her I’d never done hair on set. But like Michelle would say in class, ‘Fake it ’til you make it!’ As long as you can execute it, it’ll be fine. Even today, if someone asks me to do something I’ll say yes, then go figure it out.”

The only time I was truly star struck was when I found myself in an elevator with Morgan Freeman, Kevin Spacey and Justin Timberlake for a movie called Edison. I did touch Justin’s hair a few times. It is lovely hair.

The more time Lori spent on set, the more she loved it.

“Of course it’s exciting! If you don’t find it magical there’s no point in doing it! The only time I was truly star struck was when I found myself in an elevator with Morgan Freeman, Kevin Spacey and Justin Timberlake for a movie called Edison. I did touch Justin’s hair a few times. It is lovely hair.

“I was offered an assisting position on Supernatural by Jeannie Chow. I joined in Season Two, did that season and was also doing day calls on Masters of Horror, which led to me getting Season Two of Psych.

“Soon after that I met my husband at the Coachella music festival and we moved to the UK for what was supposed to be six months.”

What began as a half-year proposition turned into permanent relocation. Moving continents went hand-in-hand with a change of career direction.

“I thought about all the work I’d put into building my TV and film career and I knew I’d have to do that all over again at 35. Saying you’ve touched Justin Timberlake’s head doesn’t actually open doors.”

Even though she had carved a career and an elite makeup artist, Lori went back to where her makeup journey began, applying for a job at MAC in the prestigious Harvey Nichols in Knightsbridge. Naturally, her limitless enthusiasm made a positive impression.

I interviewed so well (at MAC) that they asked me if I wanted a management role.

“I interviewed so well that they asked me if I wanted a management role. If you’re articulate, confident and truly love it, that should come across in an interview. Management positions aren’t just about putting Makeup on people. You have to know about driving a business too. Education and sales go together naturally.”

After a year Lori moved from Harvey Nichols to the MAC store at Westfield, Britain’s biggest Shopping Centre, overseeing its growth from nine to 20 employees. It was the first in a series of great moves.

“An education position at Bobbi Brown came up. I was giving practical coaching about how to relate to clients and convert that into sales. I had to lead by example, and that meant doing Makeup every day. There’s no agenda when you’re educating. It’s more about asking effective questions and getting people to set goals for themselves.”

The most recent step on Lori’s journey is also the most exciting. Tom Ford is already a global force in fashion. Now this elite makeup artist has a major role in spreading the brand’s message across Britain’s Beauty Industry.

“As Director of Education for Tom Ford Beauty it’s my job to drive sales from an educational standpoint. I have a large team and I look after three fragrance brands as well as Tom Ford. Being a Director is more strategic— there are about 90 stores across the country. There are roles in retail that are more business-minded that you can really sink your teeth into. You can move forward and elevate yourself. I try to keep my creativity alive by doing other things.

“I have a blog now, and I’m really active on Instagram. Traditional education is making a shift. Now educators are becoming influencers.”

I still get to do lots of makeup on influencers. I travelled to Florence and Amalfi for Zara Martin. I did a beautiful wedding for Portia Freeman last year.

There’s a lot of responsibility on Director Lori’s shoulders, but she insists that business life with Tom Ford goes far beyond the figures.

“I get to travel a lot. Paris is wonderful. I go there to two or three times a year to connect with the fragrance brands. And I still get to do lots of makeup on influencers. I travelled to Florence and Amalfi for Zara Martin, who is a model and DJ. I did a beautiful wedding for Portia Freeman last year.

“I just came back from New York Fashion Week, which is always exciting. I wasn’t working backstage but I took a team of British beauty editors from Net-a-Porter, Stylist Magazine and Harrods, escorting them backstage to narrate and help them understand the looks.”

Lori’s makeup and hair mastery has taken her around the planet (via Justin Timberlake’s head) into a directorial position with one of the world’s top luxury brands. This meteoric journey hasn’t changed her in the slightest. She’s still as enthusiastic as she was when she made her decision to become a Makeup Artist.

You learn from working with different personalities how to get things done. The skills are very transferable.

“I love seeing people developing and succeeding! If you work in retail you have to love your customers and your team. In TV and film you have to get on with the actors, director and producers, but you need to get along with grips and electricians too. It’s the same in retail. You have to get along with the buyers from the major retailers, and the teams in the stores. You learn from working with different personalities how to get things done. The skills are very transferable.

“I’m so lucky. I have the best job in the world. I love to teach. I love the people I work with. I love London. I love my life!”