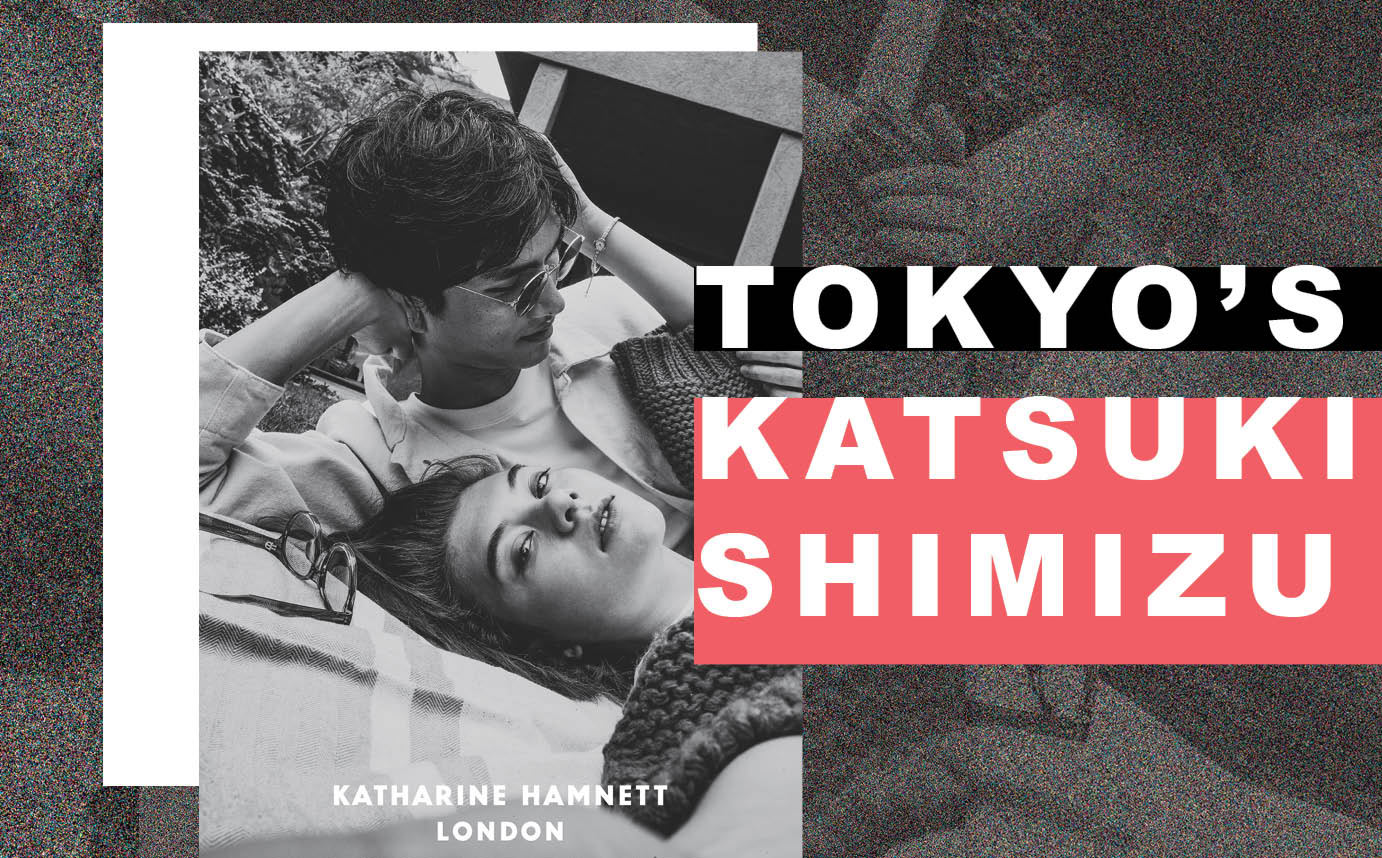 Katsuki Shimizu is used to pressure. From the baseball diamonds of Tokyo to Fashion School in Vancouver and back home to fill editorial position at some of Japan’s leading fashion magazines, Katsuki knows what it takes to get the job done.

Now he’s taking on his most challenging role yet as the Japanese Region Branding Director for iconic label Katharine Hamnett London. Katsuki is responsible for restructuring and re-launching the label’s web site, building its Instagram presence and, perhaps most importantly, making the product itself more sustainable.

I brought my portfolios from Blanche Macdonald with me. Even though I’d done women’s designs and the job was for a men’s fashion magazine, they still liked it.

It’s a heavy burden, but considering everything Katsuki has already accomplished within the fashion industry, success is inevitable.

“It’s hard but exciting,” he explains from his Tokyo base. “It’s motivating to bring the brand up a level. My responsibility is to make it happen. Right now Katharine Hamnett London doesn’t have an apparel line in Japan. It’s more accessories than clothes. We’re launching our new line for Spring/Summer 2021. It’s sustainably sourced. Katharine Hamnett used silk when she started designing in 1979 so we’ve taken that idea and making more modern clothing.

“I was in charge of sustainable editorial features at Fine, my last magazine. The more I learned the more I realized how important it is for the fashion industry to pursue sustainability. People in Japan have started to look for sustainably sourced products. Five years ago there was no such thing but even Uniqlo has a sustainable line now.”

Branding and sustainability were hardly on his radar growing up. His twin loves were baseball and fashion until an injury forced the young Katsuki to trade his cap and uniform for an entirely new wardrobe.

“My whole life at high school was baseball. It’s a very Japanese thing. I was practicing and playing almost every day. But I hurt my back and thought I wasn’t good enough to go professional, so I decided to go to Canada to study English. My English was improving and I was looking to study either fashion or photography. That’s when one of my English teachers told me that Blanche Macdonald was probably the best Fashion School in Vancouver.”

Katharine Hamnett London wanted me to do their rebrand so I began working for them directly.

Katsuki’s English wasn’t quite fluent when he first sat down with Director Jaye Klippenstein. Even when he couldn’t find exactly the right words, his enthusiasm was evident.

“I told Jaye I wanted to create things. She was sure I could do it. So I decided to go for it! When I started Fashion School I was still worried about my English. I’d have to ask my instructors a lot of questions after class about all the things I didn’t understand.”

Katsuki’s instructors were all impressed with his determination to understand every aspect of every class. Program Director Donna Baldock began as one of those instructors. She soon became a friend. She’d provide Katsuki with all the information and inspiration he needed. It was a fair trade. He was inspiring her at the same time.

“We had a standing appointment every Friday after my class with another group,” explains Donna. “The fact that he was so appreciative and grateful made it all worthwhile. He would always thank me for my time and always had a smile on his face. It was contagious! It was a pleasure to watch him grow in so many ways.”

Katsuki’s work ethic and enthusiasm were recognised at his year’s Graduate Fashion show, where his military-inspired single-sleeved jumpsuit, and blouse and cropped pants combination won him the Award for Most Improved Student.

It’s motivating to bring the brand up a level. My responsibility is to make it happen.

He returned to Japan planning on continue to design but also looking for a job in the fashion industry. He was working part-time in retail when he saw a newspaper ad looking for Fashion Editors.

“The company, Hinode, asked me to come in. I talked about fashion design and my passion for it. I brought my portfolios from Blanche Macdonald with me. Even though I’d done women’s designs too and the job was on Safari, a men’s fashion magazine, they still liked it. I had no experience in magazines, but I spoke English, I’d been to Fashion School and they thought I could be an editorial assistant.”

That editorial assistant role was the first step in a seven-year journey at Hinode that took saw him rise to editorial positions at three different of magazines—Safari, Fine Boys and Fine—and on adventures around the world.

“I was able to travel for business a lot as I could speak English better than the rest of the team. I was chosen to travel to other countries doing fashion shoots. I went to Hawaii, Portland, Los Angeles and New York. I loved that. It was exciting but also intimidating. It was up to me to do everything from the interviews to arranging the photo shoots, but it was a great experience. I was able to make connections with so many famous brands. I learned to plan and coordinate collaborations. I actually enjoyed that more than editing.

I was chosen to travel to other countries doing fashion shoots. I went to Hawaii, Portland, Los Angeles and New York. I loved that.

“The knowledge of fashion I took from my time at Blanche Macdonald was so helpful. Even though my knowledge was mainly in women’s fashion and I was doing men’s fashion, it still helped.”

As exciting as the life of a fashion magazine editor was, it couldn’t last forever.

“People work hard in Tokyo. I was working from 10am to midnight and would catch the last train home every night. I was really stressed out and knew that lifestyle wasn’t the right thing for me in the long term. I quit with no plans or no clue what I wanted to do next.”

Thankfully, a man with Katsuki’s broad talents and work ethic will always be in demand. After a brief spell as a fashion writer for various magazines (“I’m not a great writer. It takes me a lot of time to write anything.”) he was offered a planning position at a company specializing in sustainability consulting for fashion lines. One of those clients was Katharine Hamnett London. The connection was instant.

They approached us to rebrand them in Japan. Katharine Hamnett London is a well-known brand globally but it had lost its identity in Japan over the years. They wanted me to do their rebrand so I began working for them directly and became their Branding Director for the Japan.

For a young man who came to Canada to learn English and left as a Designer with a fashion education, the reality of the industry has been as exciting as he’d always imagined.

“When you see a fashion shoot on TV, with models and stylists and makeup artists and lights, that’s what it’s really like. It’s fun. At Katharine Hamnett London I have a marketing role, not a design role. I don’t think I’ll be designing again soon. For me planning and marketing are more fun!”