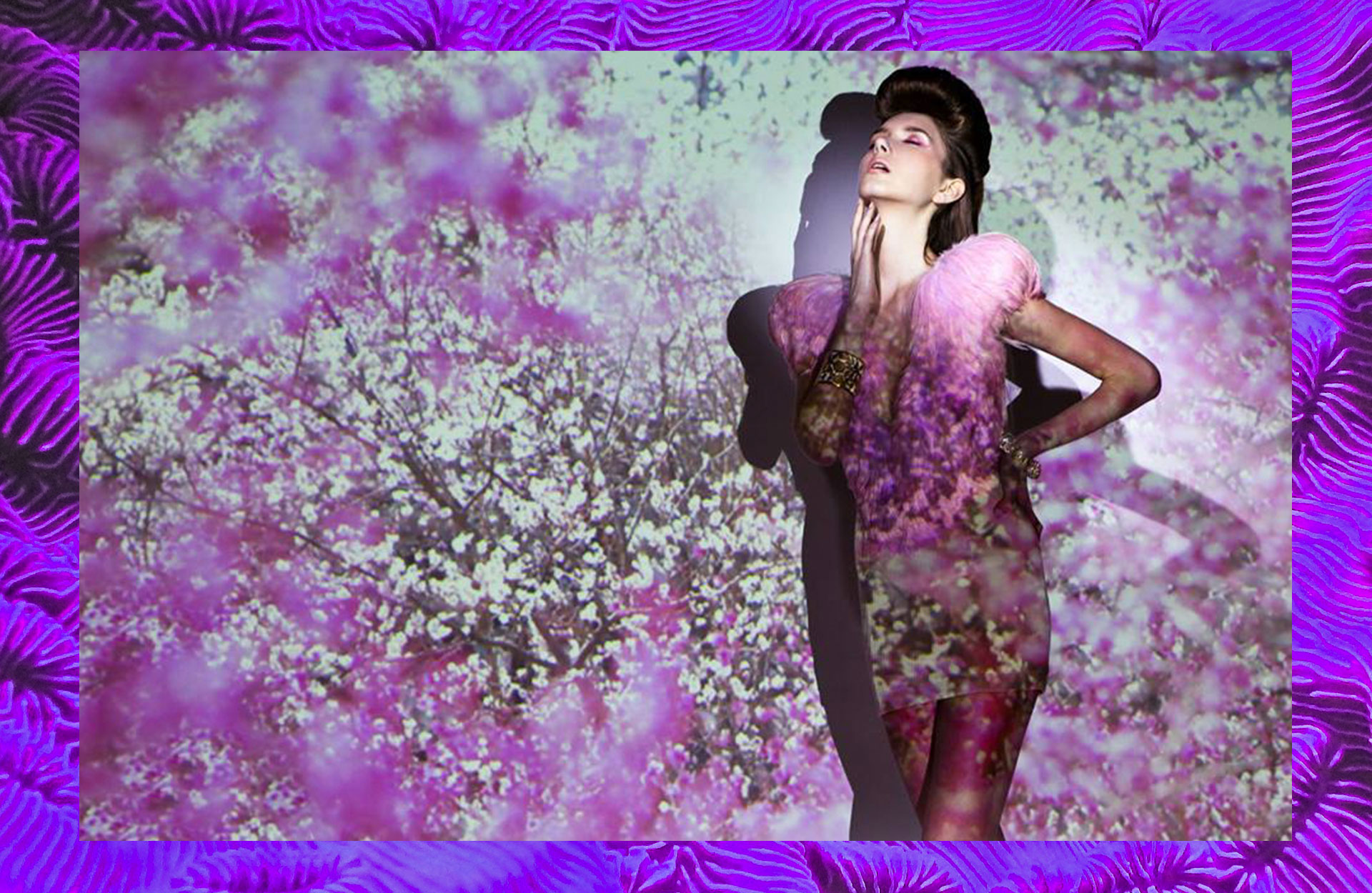 Claudia Da Ponte didn’t start out planning to become one of Canada’s busiest Costume Designers for TV and film, helping stars like Ray Liotta, Lauren Holly, Courtney Love, Molly Parker and Dominic Purcell slip into character. Far from it. She was already a successful Professional Stylist when a chance introduction pointed her career in an entirely new direction.

“I approached working on a movie for the first time like I approached styling jobs,” explains the Blanche Macdonald Fashion Marketing Program graduate. “I read the script, saw what the characters were like, talked to the Director and went from there.

“At the time I was really focused on styling. Back then I thought film was full of limitations. Someone else had created the character already. Putting someone in t-shirt and jeans isn’t that creative, right? Now I understand that I get to create a new world as a Costume Designer. I can really get into the characters’ heads. Why are they wearing these things? What’s the psychology behind it?”

I get to create a new world as a Costume Designer. I can really get into the characters’ heads. Why are they wearing these things? What’s the psychology behind it?

Claudia’s own psychological traits are relatively straightforward. She’s always loved clothes. As a Stylist that passion took her backstage to work with Céline Dion and Britney Spears, into the halls of government to illustrate Justin Trudeau’s Budget Plan booklet, and onto the pages of major European fashion editorials and high profile advertising campaigns. She’s even appeared on Entertainment Tonight Canada, providing the fashion expertise for Cheryl Hickey’s Makeover segment.

“As a kid I was always into fashion,” she recalls. “I always had my own opinion about clothes. My favourite thing in preschool was to play with the dolls and change their outfits. One day the school got new dolls and clothes and my teacher forced me to paint for a change. I was not a happy camper. I wish she could see me now.

“I realized I could actually make a living putting clothes on people when I was 16. Since then, when people ask me what I do for a living, I say ‘I’m a professional Barbie doll dresser.”

That’s Claudia’s typically fun way of approaching her chosen career in one of the most competitive businesses out there. It’s an outlook that was honed during her time on the Fashion Marketing Program at Blanche Macdonald. She worked hard, in and out of the classroom, but she made a point of enjoying her time at Fashion School too.

“Blanche Macdonald was intense but I loved it. The styling course stood out for me, although I had to miss one class because I was styling the Coquitlam Centre ad campaign. My life was literally sleep, eat, Blanche, volunteer. And it paid off! I had a lot of contacts when I left school. I still keep in touch with my teachers at Blanche. If you’re good in class, they’ll help you out when they can.

“I knew styling was what I wanted to do so I always tried to figure out how everything I was learning was relevant to that. It’s useful to understand the process of garments from design to how they end up in the stores. Fashion is your industry and the more knowledge you have about it, the better off you are. I picked up my fashion knowledge and history at Blanche. They really drill it through you in Peggy Morrison’s classes, learning about all the different designers and how they got to be where they are.”

Blanche Macdonald was intense but I loved the whole program. It was literally sleep, eat, Blanche, volunteer. And it paid off!

Claudia began working in the costume departments for major productions visiting Vancouver immediately after graduation, including Cats, High School Musical, Annie, Cirque Du Soleil and Spamalot. With a growing reputation as a hard worker and a fun person to have backstage, Claudia’s name began to be put forward when touring music superstars like Céline Dion and Britney Spears came to British Columbia.

“When you’re working on a big concert your level of professionalism has to go up even higher. You’re dealing with bigger names, but it’s still costume prep, getting dancers and everyone dressed properly, and watching for cues. It can be a bit nerve-wracking but it’s a lot of fun. At Céline Dion I was eating dinner backstage while she was warming her voice up. I had my own Céline Dion concert!

“If you’d told me back then that I would be a full time Costume Designer I would have said you’re out of your mind.”

She’d dabbled in the movie industry already, providing the costumes for the comedy That One Night when fresh out of Fashion School. She’d moved to Toronto to develop her styling career and then back to Vancouver when an impromptu meeting on a music video opened up a new career window.

“A producer introduced me to her friend, the Director Uwe Boll. His Production Manager took a chance on me and I ended up Costume Designing a feature for him called Suddenly. The lead actor was Ray Liotta. It really was welcome to film! The production company liked me a lot and they offered me Way of the Wicked with Christian Slater and in turn that led to The Town That Came a-Courtin’, which starred Lauren Holly. She and I hit it off immediately.”

Life’s been a series of TV and movie sets ever since. Of course it’s exciting. It also demands the very highest levels of professionalism. With millions of dollars invested in every major production, Claudia is expected to get the details right every time.

“I’ll read the script, look at the cast, and break it down into how many characters and costume changes will be needed. I’ll make collages and reference boards or sketch ideas. Then I’ll share those images so everyone can see it. Prep is the most important part of my job. For a feature film that can take anywhere from a few weeks to a few months. I recently did a period piece feature called 1922. I designed some of the costumes myself and even flew to Toronto for 24 hours to pull pieces and fit my lead actress, Molly Parker. I was running and driving around like a maniac all day.

“I can tweak stuff if the producers don’t like something, but normally we’re all on the same page. I’ll do a wardrobe fitting with the actors to see what needs to be altered or exchanged and then we’ll start organizing what will be worn in each scene, ensuring that nothing clashes and then everyone’s ready for camera. It’s my job to make the characters come to life. Actors normally love their wardrobe. I’ve never done a show where at least one actor hasn’t bought something. Because I come from a styling background I understand peoples body shapes. Costume designers can sometimes say, ‘the character should look like this.’ But if the actor’s body isn’t right for the outfit, that’s not going to work. There’s no point in saying, she’d look great in this if it won’t suit her body type.”

It’s my job to make the characters come to life.

“Courtney definitely had a vision for the character,” explained Claudia in her interview with Women’s Wear Daily. “The real Kitty tended to wear a lot of red so right off the bat we said Courtney would look good in red. From there we took it to jewel tones so you’ll notice throughout she wears a lot of red, yellow, emerald green and turquoise.”

The combination of fashion and film might appear beyond glamorous, but Claudia insists that her role involves as much perspiration as inspiration.

“I often work 100 hours a week. Getting up at 2am never gets easier, especially in winter. My job is 20% Costume Design, 80% problem solving. Everything you can think might go wrong will go wrong. Pants will rip. Messy actors will spill their lunch on the costume. Something will shrink in the wash or production will move a scene forward two weeks. You have to be prepared for a million problems. I don’t get angry. I look at the problem and think about how we can fix it and keep moving forward. That’s why people like working with me.”

The industry doesn’t like Claudia. They love her; honouring her with a Leo Award nomination in the category of Best Costume Design in a Television Movie for her work on A Christmas Truce, a love story set in 1940s Europe. She went back even further in time for Stephen King’s 1922, nudging the young stylist closer to stardom. The industry has already recognized her brilliance. The rest of the world is quickly catching up.

“It took a lot of research to see what my actors should be wearing and I only had two weeks to do all the prep,” smiles Claudia. “The day the Leo Award nominations were announced the crew on the show I was on gave me a standing ovation when I went to set!”

Recently, Claudia’s name has been popping up in conjunction with a fairly major world event – the Royal Wedding. The Lifetime movie Harry and Meghan: A Royal Romance demanded the absolute best and most thorough of Costume Designers and of course, Claudia was ready to step in. With a tight deadline, only about two weeks to research and plan the extensive wardrobe needs for the movie, Claudia knew it was going to be a challenge – but it was one she was ready for! The costumes in the movie for the entire Royal family have garnered some serious press both around the film’s release and Claudia’s skills and ability to recreate near-exact Royal looks.

As with any job for Claudia, it’s all in the approach and careful execution. And lucky for her, it seems she’s gained the world’s royal seal of approval!