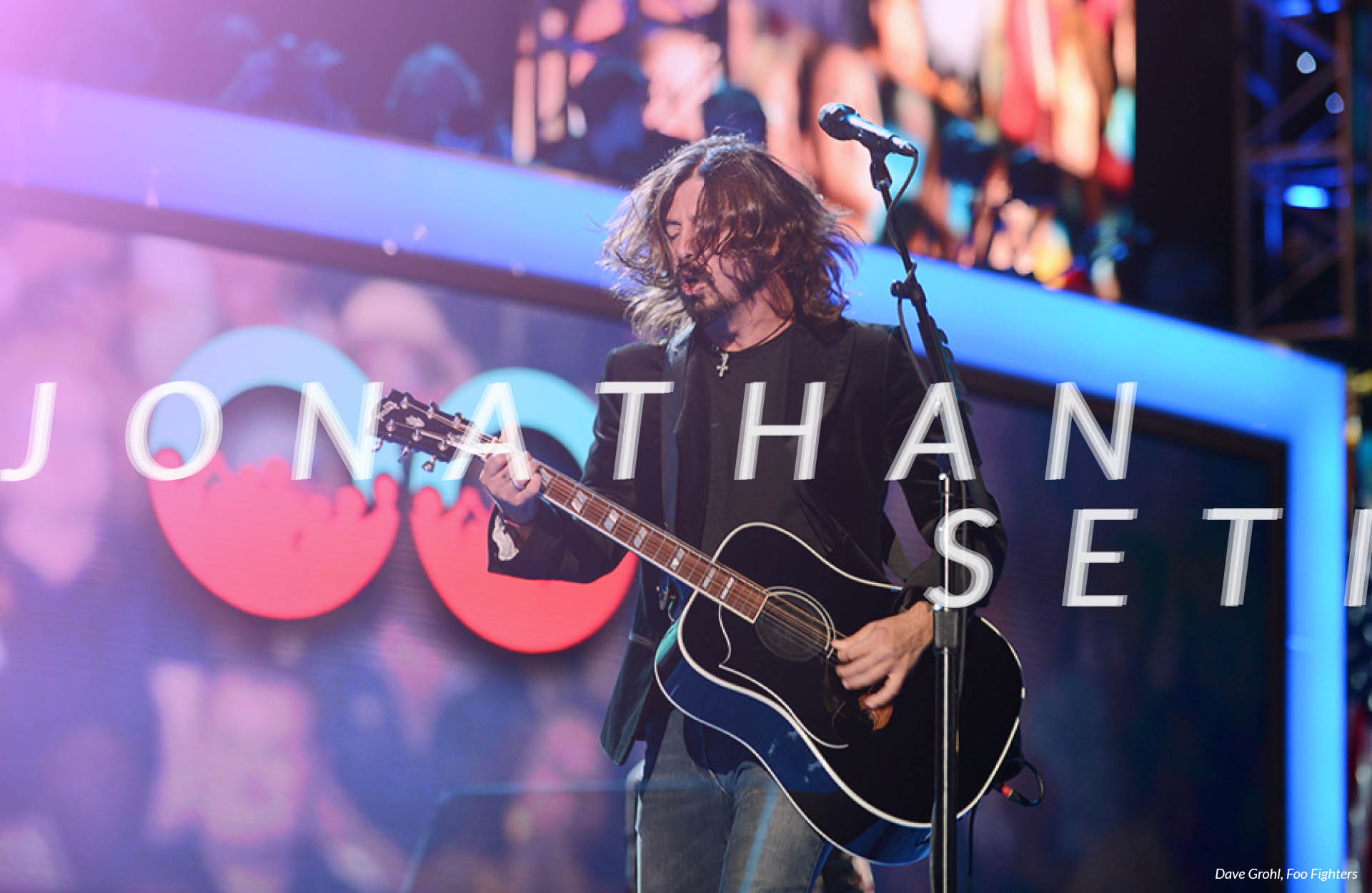 For makeup artist to the stars Jonathan Seti, variety really is the spice of life. His work on some of the world’s most recognizable faces has appeared on the front cover of Vogue and Vanity Fair. He’s been Key Makeup Artist at the MTV Music Awards and the Latin Grammys. He’s been Department Head for major productions like Show Dogs and Top Gear America. He’s even groomed a pair of American Presidents (“Not the current one!” he points out). Not bad going for a man who only decided his future lay in makeup after one particularly successful Halloween party.

“My sister has a Halloween-slash-birthday party every year,” he explains from his New York home. “I did an intricate makeup costume for my brother, similar to Darth Maul from Star Wars. Everyone at the party loved it. My brother said, ‘Why don’t you go to school for this?’ The next day I started looking for schools on line.

“I requested some information from a few schools and the very next day Mary Hombrebueno from Blanche Macdonald called me. A year later I was in Vancouver.”

Not only had Jonathan put a well-paid job as a property manager in Las Vegas on hold, he was moving to Canada to pursue an entirely new career. Daunting on paper, but the future makeup artist to the stars had come prepared. “I knew I’d made the right decision before even I got to Makeup School, because I’d spoken to Mary and the Head of the Makeup department on numerous occasions. People there didn’t know me, but they already believed in me. They could hear in my voice how excited I was about taking the program.”

Jonathan had come to Vancouver with dreams of a career in special effects makeup. But the longer he spent at Blanche Macdonald the more he realized that he was excelling at the beauty side of the business too.

Instructor Sydney Silvert was very influential in the way I think about makeup.

“I was lucky enough to have some great teachers at Blanche Macdonald,” he recalls. “My fundamentals teacher, Sandra Anderson, was a lot of fun. I did a hair course. I’m six foot four and with the size of my fingers it wasn’t easy, but I had Michelle Morrison as my teacher who was one of the coolest people I’ve ever met. And then I met Sydney Silvert. I can honestly say he was very influential in the way I think about makeup. I knew I was in the right place because my work was making me smile after every application. I’d think, ‘Wow, I can’t believe I just did that.’ I was working on a movie soon after I graduated when I stopped and said ‘Oh my God, Sydney was right!’ To see everything that he said actually come to life was so right on.”

Since graduation Jonathan’s skills have been in almost permanent demand. He returned from Vancouver to Las Vegas, when he quickly became one of Sin City’s leading Makeup Artists.

It was myself and the two other makeup artists, Hillary Clinton, Barack Obama, John Edwards and four secret service men. I remember thinking, is this real?

“I was the Key Artist for the MTV Video Music Awards. That was phenomenal. People were offering me $1,000 for my Access All Areas badge. That turned into me being the Key Artist for the Latin Grammys. I personally had to make up the tenor Andrea Bocelli in his dressing room while he was warming up his voice. People pay thousands of dollars to see this man perform, and I had my own private show.

“I worked with CNN when they came to Vegas. The first time was over All-Star Weekend when the NBA was in town. I got to do makeup for Wolf Blitzer and Magic Johnson, Charles Barkley and the mayor of Las Vegas. For the Democratic National debate I got a call from CNN’s Head of Makeup and did the makeup for John Edwards and Barack Obama. We had to hop on a trolley from the dressing rooms to the debating hall. It was myself and the two other makeup artists, Hillary Clinton, Barack Obama, John Edwards and four secret service men. I remember thinking, is this real?”

Even though Jonathan had arrived at Blanche Macdonald with the ambition of becoming a TV and film makeup artist, he’d soon established himself as a renowned events specialist. In his typically optimistic manner, he grasped the opportunities while refusing to abandon his long-time goal. “You take what you can when you’re trying to make a name for yourself. Those live events turned into taped events and then turned into movies. It took off and it never stopped.

Actors are in character the entire time they’re on set, so if you even call them by their real name, that could be a problem.

“The biggest money-maker I worked on was Jason Bourne. There were a lot of nights in cold weather over seven months on that. White Boy Rick with Matthew McConaughey was a fun movie to work on. So was Show Dogs with Will Arnett and Natasha Lyonne. It was interesting to see how a movie like that is made. I love dogs, so being able to work around them and people like Will Arnett was a wonderful thing. He’s as funny in real life as he is on screen.”

Jonathan’s ability to patiently put his passion for effects makeup on hold finally paid off when he landed the position of Special Effect Specialist for the series The Following.

“Any time I get to do effects I love it. For The Following I did a lot of head casts with actors who weren’t used to it. It’s claustrophobic to have a mould of your head taken. It’s a 45-minute process with straws up their noses so they can breathe. Sometimes you need to hold their hand or put your hand on their back. It’s getting to play Halloween and getting paid for it.”

Keeping the oxygen flowing to The Following’s cast is typical of the creative and interpersonal challenges this makeup artist to the stars faces on a daily basis. Thankfully, his years of experience have made him an expert in the art of Actor/Makeup Artist relations.

“You let the actor dictate how it goes. The first day you meet an actor, you’re starting a relationship. You have to go in expecting nothing. The actor needs to remember lines, so a lot of the time, with method actors especially, you’re not going to be talking to them at all. They’re in character the entire time they’re on set, so if you even call them by their real name, that could be a problem. As a Makeup Artist you have to be on top of your game every day to not disturb the actor.

Take the best Makeup Artist in the world with a poor attitude and a mediocre Makeup Artist with a great personality, the mediocre artist is going to get the job every time.

“At the same time I couldn’t work a job where my personality couldn’t show a bit. I love meeting people and finding out what they’re about. Not because they’re celebrities, but because their lives and how they live are interesting. I’m curious to find out what the real person is like. That’s 50% of the job. The other half is the creativity and the artistic side. When you’re in a trailer for three months on a movie, you’re with actors and the other Makeup Artists. There are going to be arguments, tears and laughter. You need a bit of drama so there are things to laugh about later on.”

Jonathan’s happy to let his personality shine through. His personable, can-do attitude is at the heart of a success story that’s gone from strength to strength since he moved back to his native New York.

“If you take the best Makeup Artist in the world with a poor attitude and a mediocre Makeup Artist with a great personality, the mediocre artist is going to get the job every time. They can do the work and won’t cause drama. Personality is number one. I’ve been very fortunate to be in the right places at the right time. I’ve left the right impression with people to get to the next levels.

It’s essential to have a thick skin doing this job. People will say ‘No’ to you your entire career. Take negativity and turn it into fuel and positivity.

“Makeup Artists are like bartenders for actors. They’re coming into the trailer to see you and they might be upset with something that happened on set. It might be taken out on you. You’ll hear stuff that you don’t want to hear. You can’t take it personally. You need to move on.

“It’s essential to have a thick skin doing this job. People will say ‘No’ to you your entire career. Take negativity and turn it into fuel and positivity. It’ll help you be the best you possibly can be. So many people told me ‘no’ over the years. I sent a lot of those people signed copies of my first Vogue cover!”