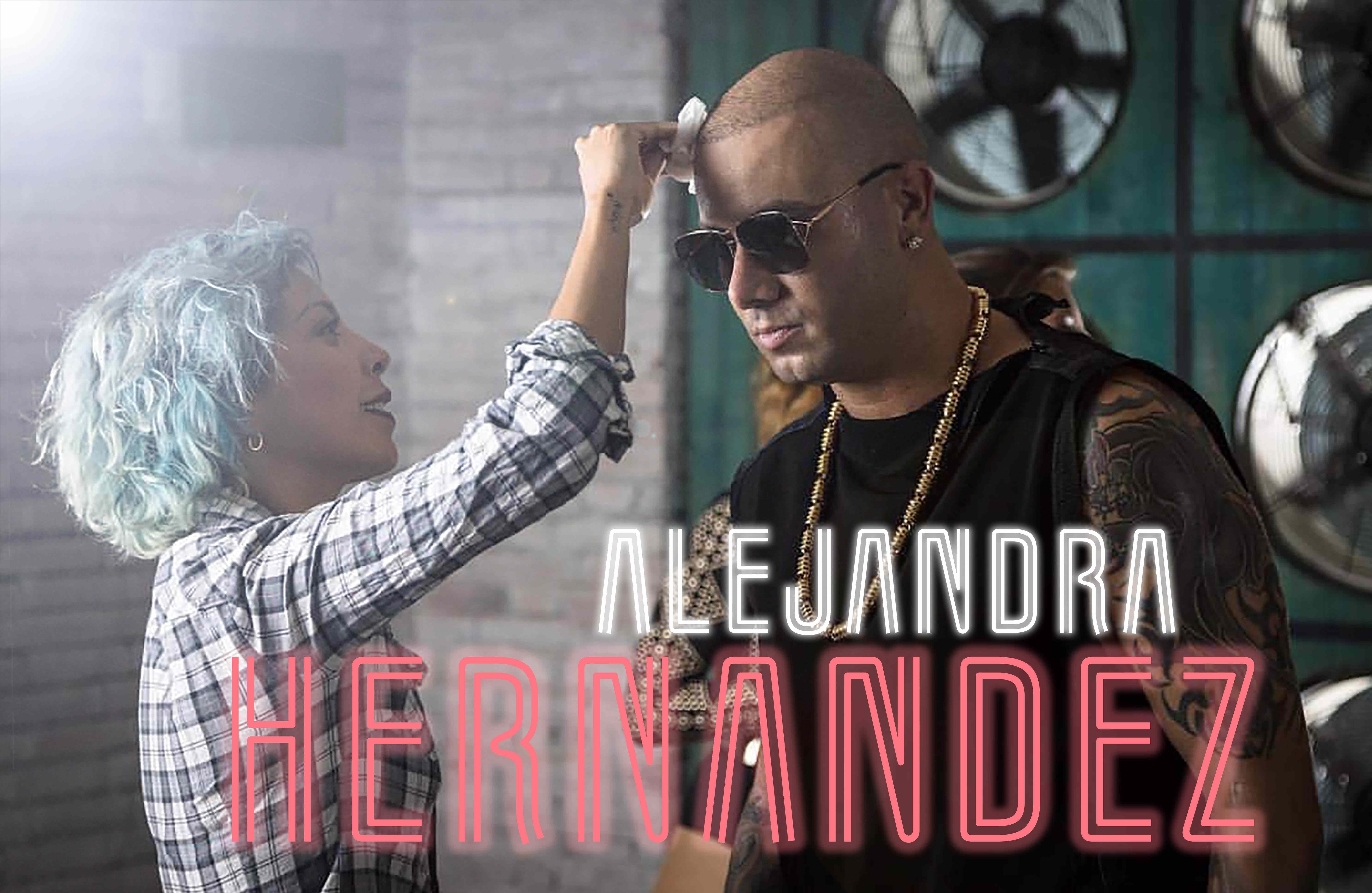 With more than nine years in the entertainment industry, Alejandra Hernandez has worked in nearly every sector of makeup artistry possible. She’s worked in TV and Film, on commercial photo shoots, magazine editorials, weddings, cosmetic retailing, body painting, and even on celebrities. But she didn’t stop there: she is also trained in brow microblading, lash lifts, and temporary tattoos for the screen all because her skills were in such high demand, she kept getting requests that she offered more! Born in Mexico City, Alejandra first started her makeup journey in Mexico, trained in Vancouver, and found work in both Vancouver and Mexico—all before moving to Montreal where she is successfully building her clientele and reputation! To say that Alejandra is motivated in her Makeup career is an understatement. She speaks adoringly and with excitement as she shares the highlights of her career and her hopes for the future. Though it’s hard to tell exactly where Alejandra will end up settling herself geographically, one thing is for certain, Alejandra is a multitalented Makeup artist!

Take us back to the start of your Makeup journey! How did it all start?

It didn’t start right away! When I was younger, I had these dolls that I played with constantly but I never thought about doing makeup or anything like it as a career. I was intending on being a teacher like my mom. What I actually became was an Industrial Engineer! I worked in that field for ten years and that is where I met my husband.

I’ve been able to go back to Mexico and get some really amazing opportunities. I’ve worked with Antonio Banderas, Gerard Butler...and I did body painting for the premiere of the James Bond film Spectre.

Wow! How did you end up discovering your passion for the Makeup industry?

Well, eventually I decided to change my career path. I ended up getting a job as a Cosmetic Production Planner and I absolutely loved it! Every time a shipment came into the warehouse, I would run to unpack it to see what I was going to be buying next. My role with Revlon in Mexico City moved to more of an Image Consultant eventually and that’s when I decided that I needed to train in Makeup.

And that’s how you ended up in the Makeup program at Blanche Macdonald?

Yes! My husband and I left our careers as engineers in Mexico and we moved to Vancouver to study our actual careers. Making such a big move, I wanted to make sure I was at the right school to learn what I needed for the next phase of my life. I did so much research before we moved and I just knew the program at Blanche Macdonald was the only place to go. As soon as I started the Global Makeup program, it was amazing. One of my first weeks in class, [Celebrity Makeup Artist and legend] Ve Neill was at the school showing us how to create Johnny Depp’s character, Captain Jack Sparrow. It was just incredible.

I did so much research before we moved—I just knew the program at Blanche Macdonald was the only place to go.

Did you have a good grasp of English before coming to Canada?

Before coming to study as a Makeup Artist at Blanche Macdonald, I studied English for a month as soon as I arrived in Vancouver to get my ears familiar with the language. It was a challenge for me because we had to do written tests and had to learn so many new terms. I studied every day, and I worked harder because all my savings were invested in my new profession.

Since graduating from Makeup School, it looks like you’ve done quite a bit of film and celebrity work in your career!

Yes! When I graduated from Blanche Macdonald, my idea of a career was doing Makeup and Hair for brides or social events on weekends, but I’ve been able to go back to Mexico and establish myself there and in turn, get some really amazing opportunities. My career developed more in the entertainment industry working with Mexican, Latin and even international celebrities. I’ve worked with Antonio Banderas, Gerard Butler, Karla Souza, music artist Wisin, and I did body painting for the premiere of the James Bond film Spectre.

Everything I invested in—such as education and products—helped me, but the people I met in the entertainment industry did so much for me. They invited me to work in the most important production houses in Mexico City and the producers, directors, colleagues, and actors that I knew in each project had begun to recommend me for other projects. I started doing makeup for Argos Communication who produces so many TV series and programs for Netflix, Telemundo, MTV, and independent films from the USA, EXA radio, El Mall, Curiosity, Various Wolves, Emigre Films, EstiloDF, Cuídate de la Cámara. I was also able to do some magazine covers and many more projects, where sometimes I was Head of Department or assistant to the HOD.

I always say you should treat everyone in your chair the exact same. Celebrity, model, makeup counter client—it doesn’t matter. However, there are some things to keep in mind when you’re working with a high profile client. Have a station that is very, very, very clean. It’s also important for your professional image and for people to trust you with their face that you look like a professional Makeup Artist. So dress appropriately, don’t smoke beforehand, don’t chew gum in their faces, make sure you’re clean, but don’t wear perfume or any fragrance! Ask what they need and be ready to either have it with you or get it for them. When they speak, listen. Be gentle with their faces and respect their wishes always, but if you have a suggestion to improve their image or complete their look, you can suggest it.

After you graduated from Blanche Macdonald you moved to Mexico. How did you end up working in Montreal?

My husband’s career has brought us to Montreal so I’m starting again in a new language, leaving my country, family, friends and all my clients all over again! I’ve lived in Montreal for two years now, but I’ve returned three times to Mexico for pending projects and my previously booked clients. Little by little I have clients in Montreal, but it is a matter of time and patience to create my career in Canada as it is in Mexico. My husband loves his job here right now and I really love establishing myself in a new city; it’s such a great challenge.