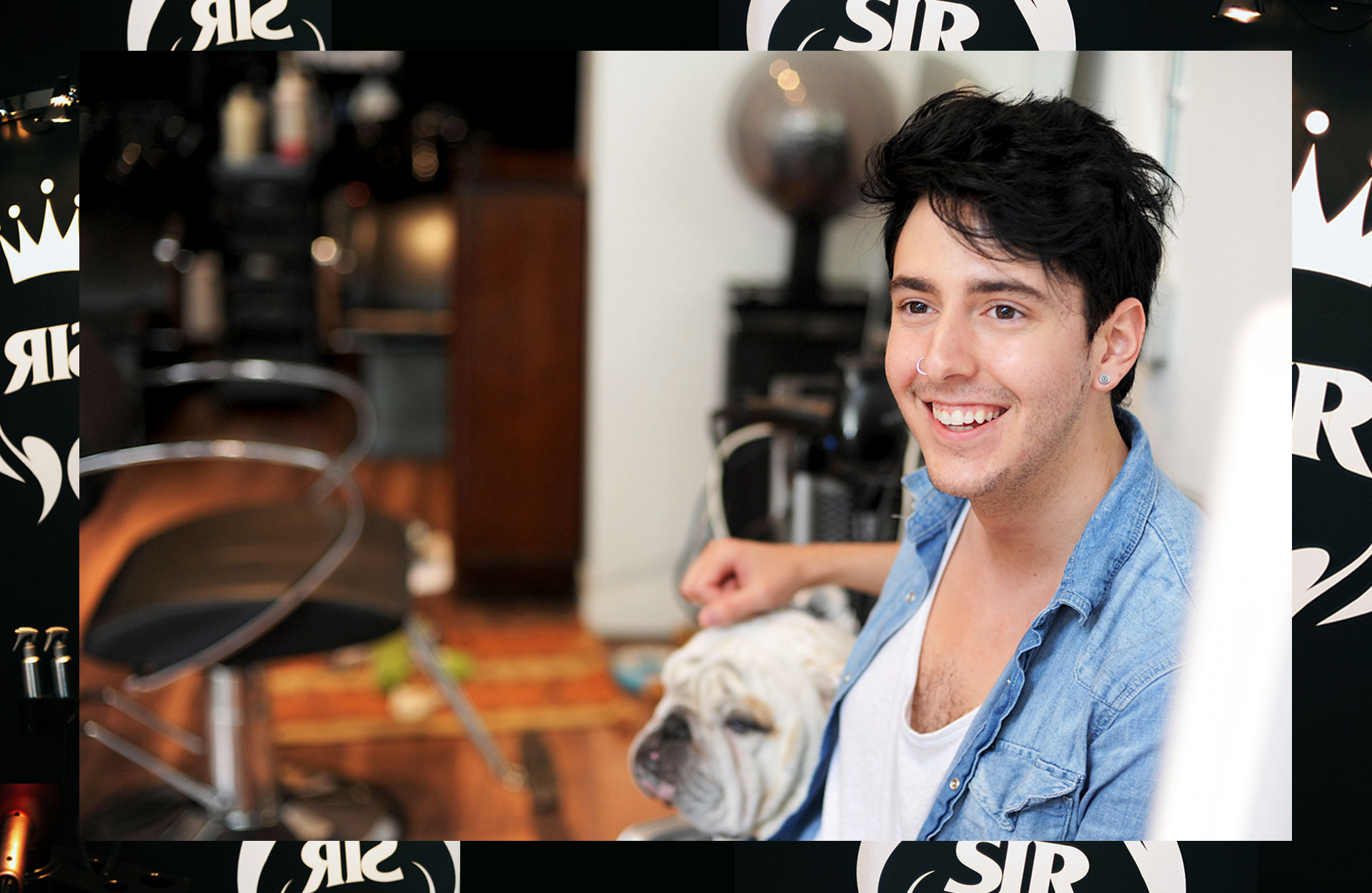 Let’s make one thing clear. Dylan Walker is a hair stylist, not a barber. Still, when you work at a salon called SIR Modern Barbershop, it’s an easy mistake to make. Which is why, once in a while, the barbering skills he’s picked up from some of his colleagues come in extremely helpful.

“In November, which was Movember, the moustache-growing charity month, an office nearby was having what they called a small event,” recalls Dylan. “The boss there had had a moustache all his life and if the office raised some crazy amount of money he said he’d get it shaved off. My co-worker and I went there and she was meant to straight shave him, but she got all jittery that day and made me do it. Up to that point I’d only ever straight shaved friends and my brother. I got there, and 100 people are in the room all taking photos. We didn’t even have a proper barber’s chair. He was sitting upright. It was scary, but I did it and didn’t cut him.

“Looking back, the moustache actually suited him,” he laughs. “He was bald, so he didn’t have much else going on.”

Holding a straight razor to a prominent Vancouver businessman’s neck is a long way from Dylan’s previous job, working behind the counter at Starbucks. He had been at the coffee chain for two and half years after graduating high school when the idea of capitalising on an old habit came to him.

We were never taught to do specific creative styles. Instead, we learned the skills and the ability to look at a style and know how to do it.

“I was pretty awkward in high school,” he smiles. “Creative. Drunk. But mainly awkward. I didn’t see a career in it, but I would always cut my own hair and my friends’ hair. I was persuasive. I thought it was good, but looking back, it wasn’t. I would often have an uneven mullet. At the same time, I was never happy when other people would do it. To this day only two people have cut my hair more than once. I’m picky, I guess.”

Dylan searched the Internet for Vancouver hair schools, and an information request from Blanche Macdonald resulted in an immediate and friendly phone call from Admissions Director Lise Graham.

“I visited the school twice before I enrolled. When I had my first tour everyone really looked like they were having fun. I heard and read a lot of good reviews too.”

After an early period of adjustment – “It was a little weird coming back to studying after two and a half years” – Dylan realised that the creative ideas he’d been inflicting on his high school friends were being moulded into something coherent and exciting.

“We were never taught to do specific creative styles,” he explains. “Instead, we learned the skills and the ability to look at a style and know how to do it. We had to be willing to learn and absorb everything. Which I did, because I learned really easily.

“I really bonded with my instructor, Marcy Hodel. She taught a lot of my classes and we were with her in the salon almost every day. It was cool being taught by someone I actually had a lot in common with. All the teachers had their different styles, and I liked that.”

“I did a lot of styling for photo shoots with the Fashion Merchandising students, which normally involved me phoning sick into Starbucks. I worked at the Fashion Design show too, which was very busy and a lot of fun. I hadn’t been taught by Bridgette Smith up to that point, but we met and bonded that night and it was really fun when she did start teaching us.”

Strangely, Dylan didn’t realize how good he was until he started seeing clients after he had left Blanche Macdonald. Not that that took a long time. He was working at SIR Modern Barbershop two weeks after graduation.

“I only really noticed that I had the confidence to do this when I left school and had to do it on my own. I was planning to take some time off, but I found the ad for SIR Modern Barbershop on Craigslist and came in for an interview and a demonstration of what I could do. I really liked the salon so I wanted to really wow the owner with extensions. But the girl I brought had the worst possible hair to try to do hair extensions on – really fine and slippery. I was sweating the whole time, but I did it. Not everybody does something like that in an interview. Anyway, I got hired. That was over fifteen months ago. Every day I get to see my lovely co-workers and clients. When you have regular clients you get to become friends with them. It’s been awesome.”

That sentiment is seconded by his employer and number one fan, SIR Modern Barbershop’s owner, Jacob Ricarti.

“The reason I hired Dylan was he had self-confidence and such great training at Blanche Macdonald,” he explains. “For his interview he brought a girl in with silky smooth hair and did corn-rowed braids and put in extensions. That was very ballsy for a student straight out of hair school. He’s absolutely flourished. Dylan was born to be a hairdresser.”

“The emphasis in SIR Modern Barbershop is on the Modern,” continues Dylan. “We do have barbers but we also do women’s hair. It’s more the environment that’s different. Where most salons mainly cater to women and also do men, here we cater to men but also do women.”

I only really noticed that I had the confidence to do this when I left school and had to do it on my own.

The salon environment is a little different, but that change from the norm suits Dylan perfectly. The philosophy he was taught at Vancouver’s best Hair School, that there’s more to being a successful stylist than just techniques, has changed him professionally and personally. The awkward kid now oozes the kind of gentle confidence that makes him in demand for both fashion events and private weddings.

“I was always shy as a kid, so it was a little hard to get there,” he admits. “I’m still awkward, but you have to change. You have to be personable and you have to stand out. The first time I see I client I ask a lot of questions and don’t really talk about myself. After that, we’re friends, so whatever.

“I’m still willing to learn too. You can learn a lot just by watching. If I don’t have a client I’ll be watching my colleagues, thinking about what they’re doing and whether I would do it differently. I’m always watching. That’s how I picked up the barbering skills.”

How much has he changed? The high school student who once had to persuade his friends to let him cut their hair now delivers some different advice.

“Once you have some training you should charge your friends,” he insists. “You don’t want to be giving stuff away for free. Sure, they’ll always be mad at first but you’re a professional. I even charge my mum for her haircuts.