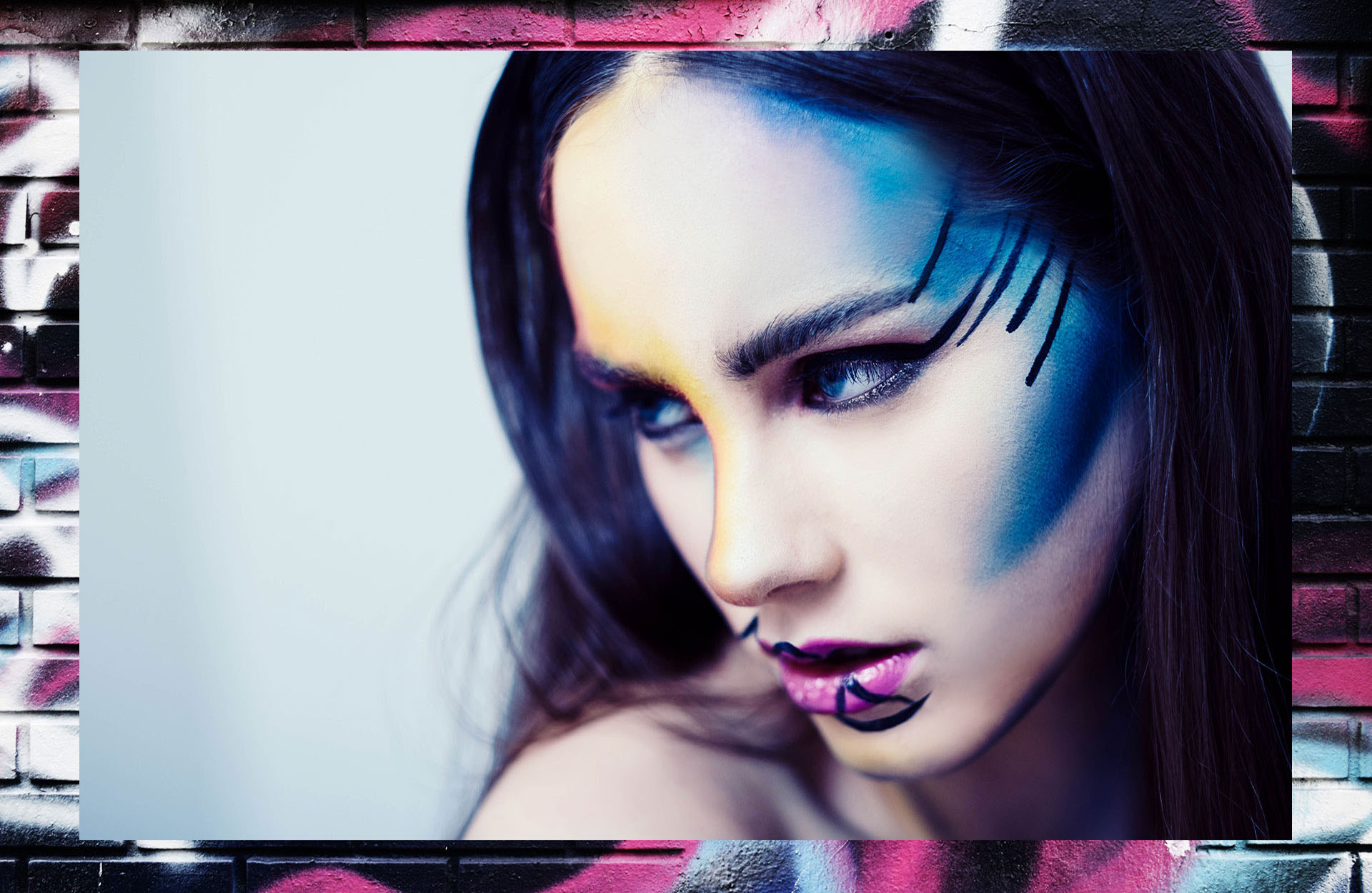 Shaina Azad takes the business of Makeup seriously. That’s how she’s succeeded across multiple disciplines since graduating from top Vancouver Makeup School Blanche Macdonald. She’s continually busy working with Indian Bridal and Beauty clients. She launched and is selling her own cosmetic line, SUVA Beauty, around the world. She’s working on sets for commercials seen across Canada and beyond. And she’s teaching at the School where her own journey began.

On top of all this, Shaina somehow finds the time to run a popular YouTube makeup tutorial channel. Which is where you realize that there’s a huge difference between taking your work seriously and taking yourself seriously. 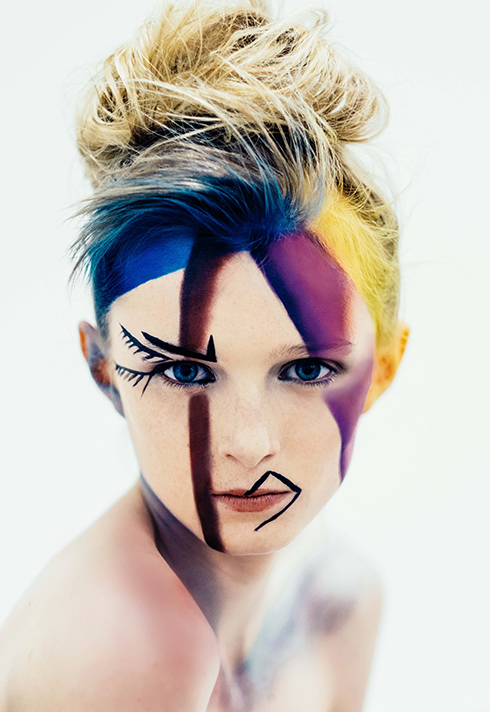 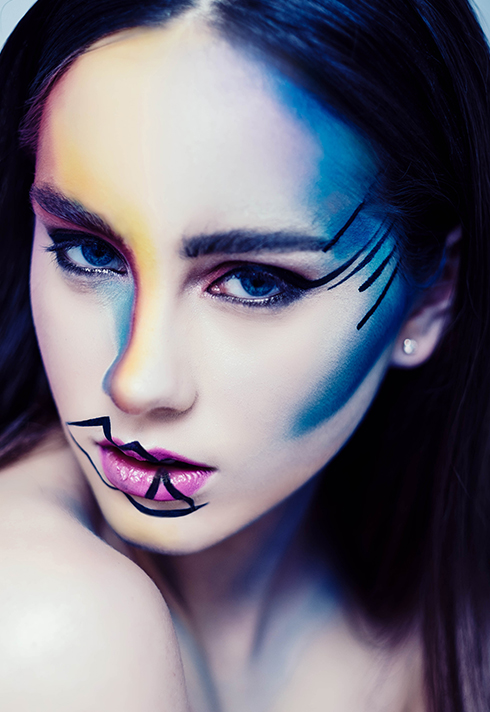 “I have no problems making fun of myself,” admits Shaina. “I’m quirky, try to be funny, and speak my mind. I want people to know me as an artist and understand my personality. I specialise in Indian bridal, but I want to show that I can do everything else. I’ve had people stop me and take photos in the street. So bizarre!”

I tell my students, if you work hard, put in the time and effort, and stay humble, the sky’s the limit.

Great artistry paired with a natural gift for comedy is a potent combination. A YouTube rant about frustrating counter service is what persuaded ABC Producer Glenn Ruppel to contact Shaina for her highest profile appearance so far, inviting her to New York to share some of the less ethical tricks some cosmetics salespeople use as part of a special feature on the channel’s flagship news magazine show, 20/20.

“When Glenn emailed me out of the blue I thought it was a joke. Why would an ABC producer want to contact me? But it was real. They flew me to New York, put me up in the Empire Hotel and gave me a private driver to show me around.

“We filmed the piece in Staten Island. I had no idea what to expect before the filming began. There were hidden cameras all around. I’d never seen the products before and had to sell it to passers by. I was so nervous. But I got into character and sold it. All my tricks worked. For every 15 people I stopped, 12 handed me money.”

Shaina can be persuasive. She’s been that way since she first discovered the transformative and social power of makeup. 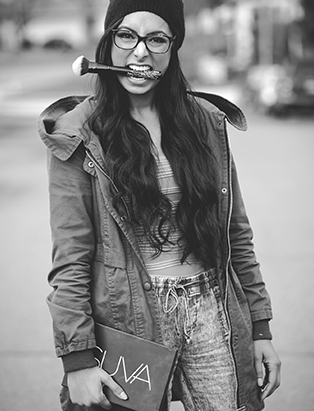 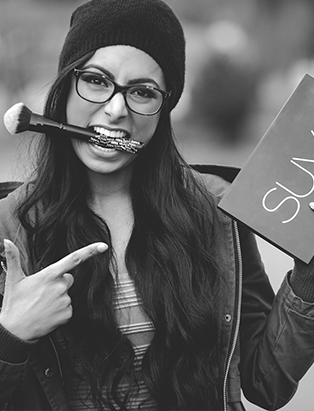 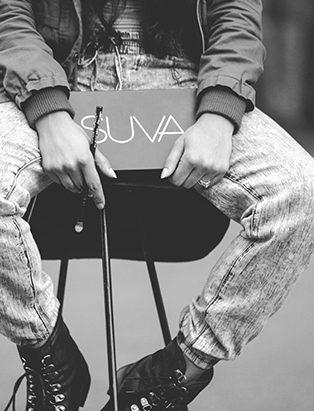 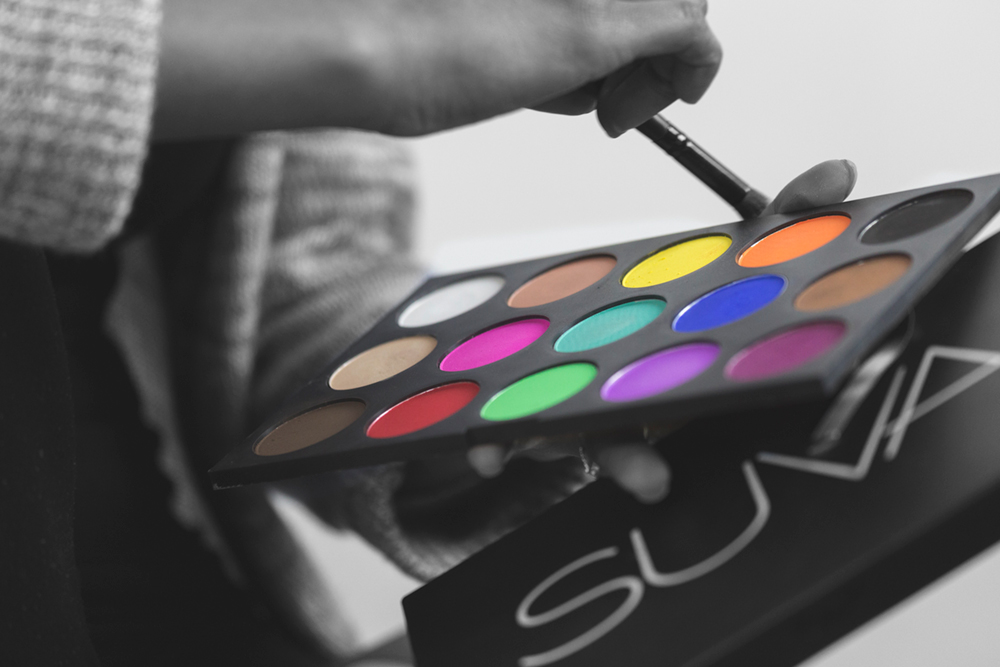 “I always wanted to be an artist. In Fifth Grade I won the Artist of the Year Award with a rendition of a Picasso painting. When I was a junior in high school some of the Grade 12 girls came into the drama room looking for makeup. I announced, ‘I do makeup!’ It could have gone horribly wrong, but it turned out amazing! I thought, ‘This is great!’”

Shaina was studying International Relations and Foreign Policy Making at university when she decided to take the part-time Introduction to Makeup program then offered at Blanche Macdonald.

“I’d heard about Blanche Macdonald and knew people who had gone there. I had Lesley Opheim as my instructor and it was great. I figured I could work at MAC on the weekends. Which I did, right after I graduated. That was awesome. Leah Elliston was my MAC trainer on my first day. I remember thinking she was absolutely stunning!”

Like Leah, Shaina eventually joined the faculty at Blanche Macdonald. But not before she’d spent a year in Cairo as a journalist and marketing consultant, refining her artistry at weekends with grateful Egyptian brides. Determined to make makeup her career, Shaina returned to Canada and began hustling her way onto sets for a string of Movies of the Week.

“Life on set was exciting, new and different. I was so eager to learn and make friends with everyone. I put a lot of work and effort into promoting myself. I would go to events and fashion shows. If I met someone in the film, fashion or beauty industry, I would make sure they knew who I was. I would get their information and follow up with an email. It was a constant hustle. If there was a Makeup Artist I really liked I’d offer to clean their brushes. I bugged Tina Teoli a lot when I was on set with her.” 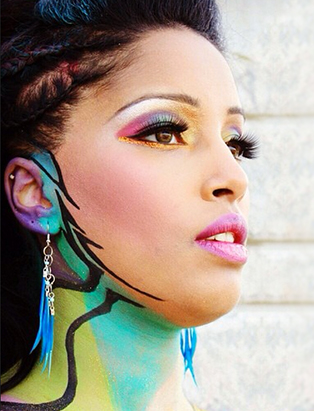 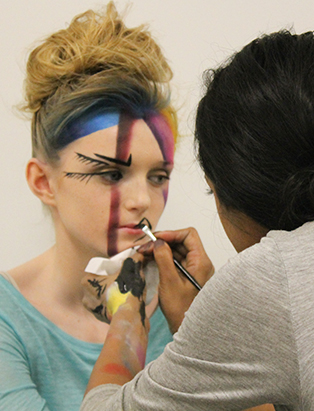 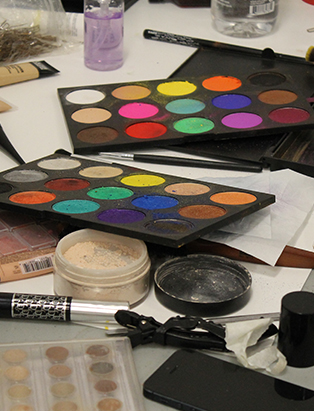 Shaina was already an in-demand professional when she returned to Vancouver’s top Makeup School to take the full Global Makeup Program. Her aim? Expanding and enhancing her skills even further.

“When it came to TV and Film, prosthetics and airbrushing it was all exciting and new. I learned a lot of new things and connected with so many instructors. Timothy Hung was my fashion instructor and I loved his 20-minute drills. CJ Wills was one of my favourites too. I still call her if I have questions about the industry. She has a wealth of knowledge.”

Life’s been a whirlwind for Shaina since graduating Blanche Macdonald the second time. The Bridal Makeup specialist became a bride herself. And professionally, she’s never been busier.

“Most weekends I’ll have a bunch of clients for parties or weddings. I’m getting bookings from all over the place. I was flown to Mexico to do the makeup for one wedding. That’s a big Indian wedding trend right now. Another bride is coming from Ontario just to see me. I’ll have a couple of shoots, either commercial or music videos during the week. I worked on a Budweiser commercial with Janice Drew that ran during the Sochi Olympics and was the key artist on another ad for the FIFA Women’s World Cup with the Canadian Women’s Soccer team. I was able to do the makeup and hair for Christine Sinclair. Girls came on set and would literally cry when they saw her. She’s an icon! And a very confident woman.” 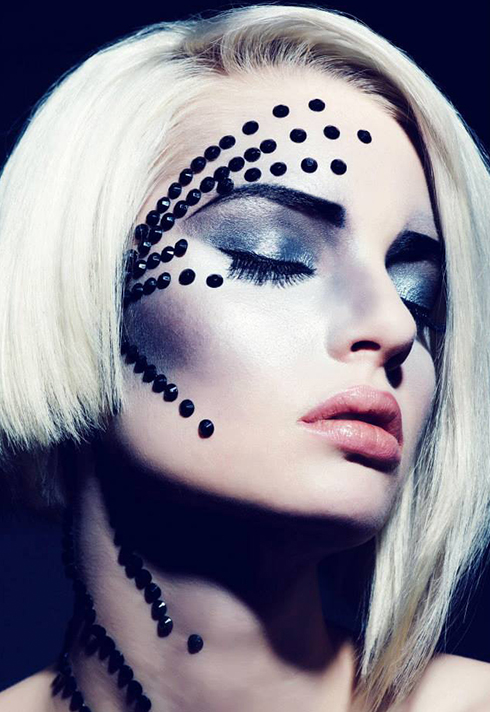 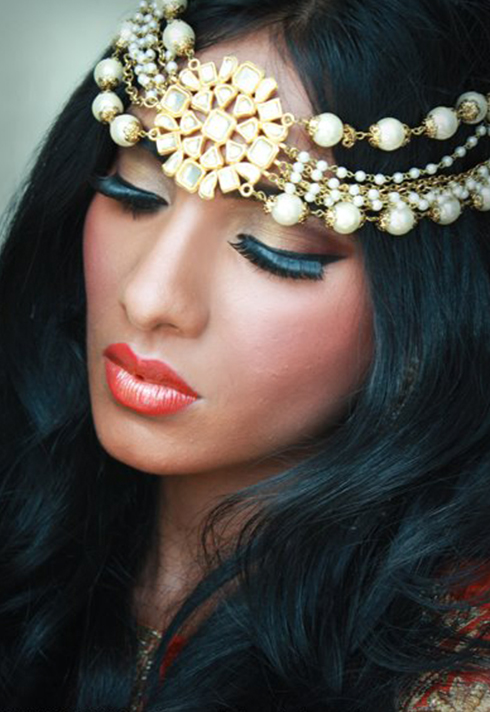 It’s no coincidence that both the World Cup and Budweiser commercials featured a certain new makeup line. Shaina’s as much an entrepreneur as she is an artist.

“I’ve had SUVA Beauty in my mind for the past two years. I’ve been doing my research, connecting with people, putting together ingredients and testing. After the 20/20 feature it seemed like the right time to put it into action. Now I have a cosmetics line!

“I wanted a high quality, pro-grade brand that everyone could use. I went through plenty of sample batches and had countless sleepless nights. It has a built in primer that actually works! It’s the perfect product. For example, on set you never want your shimmers to mix with your mattes. You don’t want shimmer on camera. Our shimmers will never mix with the mattes because of their formulations and because they’re on two separate pallets. Now we’re selling it online all over the world.” 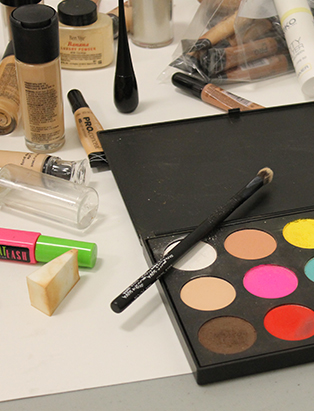 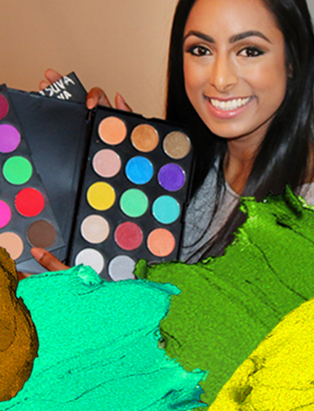 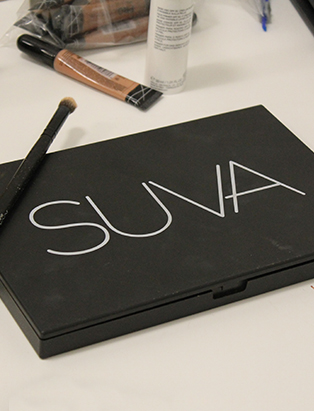 Innovator and inventor, Shaina has also patented her own brush case.

“One of my biggest frustrations was that my hard-earned dollars I spent on brushes were wasted when the brush hairs were caught in the case. So, I created a really cool and innovative magnetic retractable brush case that looks sleek, is efficient and amazingly functional!”

Whether she’s beautifying clients, shining on sets or developing products and marketing strategies for SUVA Beauty, none of it would be possible without a can-do attitude. Which is what makes her an ideal candidate to teach the next generation of Makeup Superstars at Blanche Macdonald.

“Yes, there have been emotional goodbyes at the end of classes! I love imparting knowledge. I’ve kept in touch with many of my students and a few have become part of my beauty team. My students know that they can always call or email me if they need advice or a reference.

“The makeup industry is unpredictable. It’s fun booking amazing gigs, whether it’s Indian weddings or music videos. But it’s a serious business every single day. I tell my students, if you work hard, put in the time and effort, and stay humble, the sky’s the limit.”