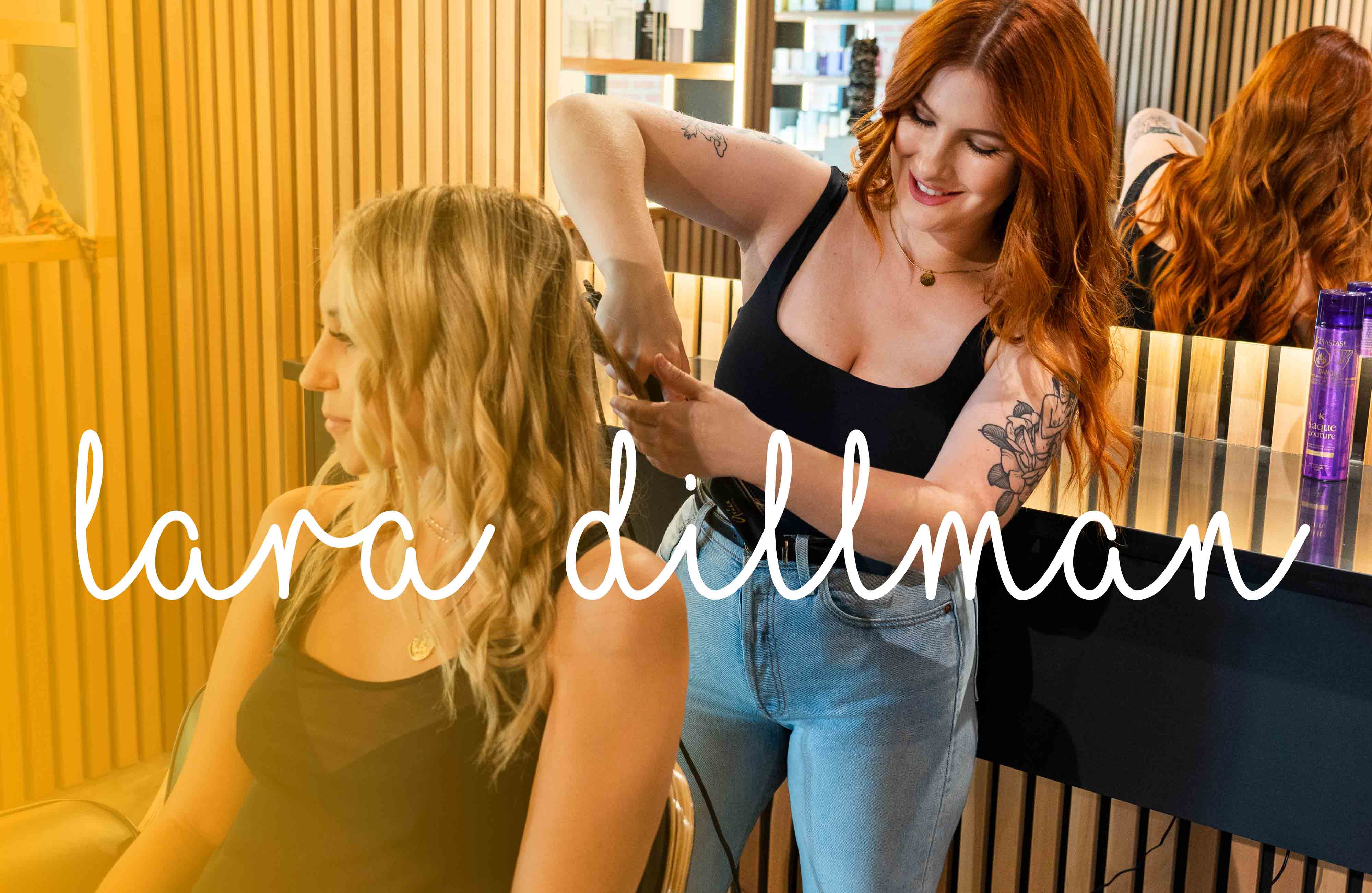 Like a literal angel-slash-Disney princess, Lara Dillman comes floating over in a flourish of beautiful silk and nearly waist-length red hair. She settles in, immediately starting a conversation like we’re old friends and it becomes clear why her services as a Senior Hairstylist are in such high demand at BRUSH Salon, one of Vancouver’s most premier hair salons. BRUSH also happens to be where visiting and local celebs always stop to get their strands touched up. Her inimitable skills and bubbling personality have her booked two months out at a time, and yet she still has time for editorial shoots and other freelance projects she chooses to take on. Her jam-packed schedule doesn’t even stop there, as she’s finding herself fielding more and more hair and makeup service requests for everything from day-to-day styles to weddings in her overflowing DMs.

Originally from Alberta, this Senior Hairstylist has accomplished what some only dream of—and made it seem easy! Graduating from our Pro Hair program with the Highest Practical Achievement award, Lara landed a job at her first-choice salon where she immediately distinguished herself as not only immensely talented but a driven perfectionist. Lover of fried chicken, karaoke, and seriously good hair, meet Lara Dillman!

Your Hair career started at Blanche Macdonald and hasn’t slowed down since! What led you to it in the beginning?

That’s such a frequent question I’m asked because I am fairly young to be where I am and most people who get their careers off to such a fast start typically have that ‘when I was a little girl’ story. I mean yes, I trimmed by grandpa’s mustache and liked playing with hair but for me, it was more of a driving perfectionist quality. I would see something and I’d think of ten different ways that could make it even better. The idea of beauty being something you could manipulate or present in a certain way was, for me, the most compelling part. Then I started learning absolutely everything I could about hair. I couldn’t figure out heat tools when I was younger, so I would learn to curl without heat with rags overnight, and as I got older I began cornering my friends into letting me cut their hair or find an excuse to do an elaborate updo. By the time I was in high school, I was doing hair for people’s graduation. My mom was actually the one that pushed me to pursue hair professionally and suggested I think about it seriously as my career.

The idea of beauty being something you could manipulate or present in a certain way was, for me, the most compelling part.

Is that how you ended up at Blanche Macdonald?

I wanted to have the best chance I could for an impactful career and I knew that to do that I needed to be on the west coast. So as soon as I finished high school, I moved out of Red Deer and came to Vancouver to go to school.

Wow! How was the move to Vancouver from Red Deer and starting hair school? Was it everything you thought it would be?

It was such a whirlwind to move here for school from the small town I had only ever lived in. It was really scary and intimidating, first moving to a major Canadian city and adjusting to that, but to then also be thrown into the hair program at Blanche; you walk in and you get your assignments and have the dress code and all these expectations. The year before, I was looking at law school, and here I was!

But, as overwhelming as it was initially, they really prepare you for the industry. It’s a very, very punctual industry so the program was such good practice. You really come to anticipate what’s expected and you learn to move past intimidation and match the pace. That’s when it becomes really exciting and starts to feel real, because then you can start practicing in an environment that’s there to help you learn, perfect your skills and refine yourself as a professional.

It’s a very, very punctual industry so the program was such good practice. You really come to anticipate what’s expected and you learn to move past intimidation and match the pace... then you can start practicing in an environment that’s there to help you learn, perfect your skills and refine yourself as a professional.

For me, the program was absolutely a necessity. I needed that conditioning. Plus, the client relations aspect of the program was huge. Figuring out how to get someone to trust you and feel comfortable with you as a student makes it so much easier to have people trust you when you’re a professional!

The client relations aspect of the program was huge. Figuring out how to get someone to trust you and feel comfortable with you as a student makes it so much easier to have people trust you when you’re a professional!

BRUSH Salon was your first choice salon and you were hired before graduating from the Hair program. How did that happen?

I really had to convince them to hire me, basically! I’d heard about them because a girl I’d worked with at Anthropologie got her hair done by Michael Gibson, who co-owns the salon with his husband, Calvyn Cass. I went home and researched the salon, which at the time was brand new, and fell in love with everything Michael and the Brush team was putting out. They were hiring for assistants while I was still in school, so I went and interviewed but I didn’t get it. When the work experience part of the program came around, I was like ‘I’m coming for a week. I’m going to be there and you’re going to love me.’ I still don’t think they were sold on me (HAH!) but one of their assistants was leaving and they knew how badly I wanted it. I graduated on a Friday and started there the next Monday… and that was four years ago!

I graduated on a Friday and started (at BRUSH Salon) the next Monday.

Your blonde balayage was recently featured on Mane Addicts—that’s a pretty awesome accomplishment!

Oh, that was so cool! One of my first fangirl moments in hair for sure. Mane Addicts is a huge hub for stylists to collab with and educate each other that was started by Jen Atkin, who is a huge inspiration for me in the hair world. It was really cool to have had the opportunity to contribute to their website! I saw they were looking for content for a blonde hair story and so I figured I’d submit. Getting that email was one of the coolest hair moments for me yet. This interview might be my second!

Doing celebs or ‘it’ people’s hair is, of course, so cool... But for me, when I have clients who choose to spend their time and money with me to make themselves feel their best, that’s a pretty incredible feeling. They could see anyone, but they’ve chosen me!

That’s amazing! What would you say is the best thing and the biggest misconception about doing hair?

OMG that we’re wizards and it happens in an hour! Everything that you see on Insta is 100% the result of three different six hours sessions, top-notch products, and an A+ hair care routine, and probably $1000 worth of hair extensions. Educating people on their hair and the products they need to achieve their hair goals is probably one of my favourite things about my job. Being able to connect with people who have a hair dream, whether I facilitate the final bits or we create it from scratch over the course of a year, and seeing my professional advice play out is so rewarding. Some of my clients have shared with me so much of their lives just with the small part I play in it, and I feel emotional just talking about it! I appreciate and acknowledge that connection more than anything in my career.

Doing celebs or ‘it’ people’s hair is, of course, so cool and always an incredible opportunity. But for me, when I have clients who drive an hour or more from outside Vancouver, who have kids, and other commitments or not so much disposable income, and they choose to spend their time and money with me to make themselves feel their best, that’s a pretty incredible feeling. They could see anyone, but they’ve chosen me! It never gets less crazy to me that that’s where I am.

While I was going to school at Blanche, I used to work at Anthropologie which was beside The Latest Scoop when they were just starting their pop-up stores. I reached out to them at one point if they ever needed someone for their advertising, and I’ve been styling for them for the last two-ish years. Their photographer Noah Asanias has become such an awesome friend, and I so admire his hustle and drive to grow his craft. He has referred me to style for people that are in town from LA whenever he’s putting together a shoot, so I’m lucky to have these types of referrals as my own foot in the door. We recently shot a creative with Alexander Ludwig and his girlfriend, Kristy Dawn Dinsmore, from Vikings. My coworker and fellow Blanche grad Sara Rose has worked with Mariana’s Trench for years and recently referred me as the groomer for a shoot she was styling, which was a fangirl moment for me because I went to their concerts as a kid in Red Deer. I’m definitely very lucky to work alongside other really driven and talented artists that trust me with great opportunities!

What are your Hair tips for a bad hair day?

Honestly, I try my best to channel the Olsen twins to the best of my ability for the ultimate ‘I woke up like this’ look when confronted with a bad hair day! They are my beacon of hope on a bad hair day. You can also never go wrong with accessorizing; whether it’s your faithful hat or your favourite scrunchie, you’ll look better, I promise. I swear by scrunchies!

You’ve already had such a cool career. What do you think is next?

I’m so very grateful for where I am in my career already. I’m hoping to continue to grow as a Senior Hairstylist and would be interested in being an educator down the line. I seem to flip flop on maybe wanting a more lowkey future and moving to the island or the coast to have space for myself to continue with a more part-time feel, or really stepping back from hair and doing more education for brands like L’Oreal and even living abroad for work. It’s hard to say, but I’m always curious about what the future holds for me! 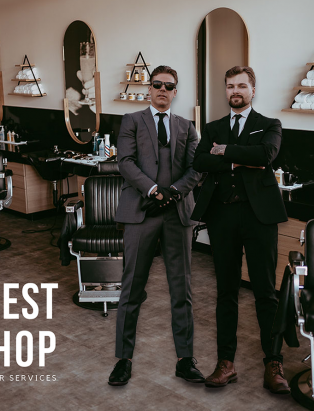