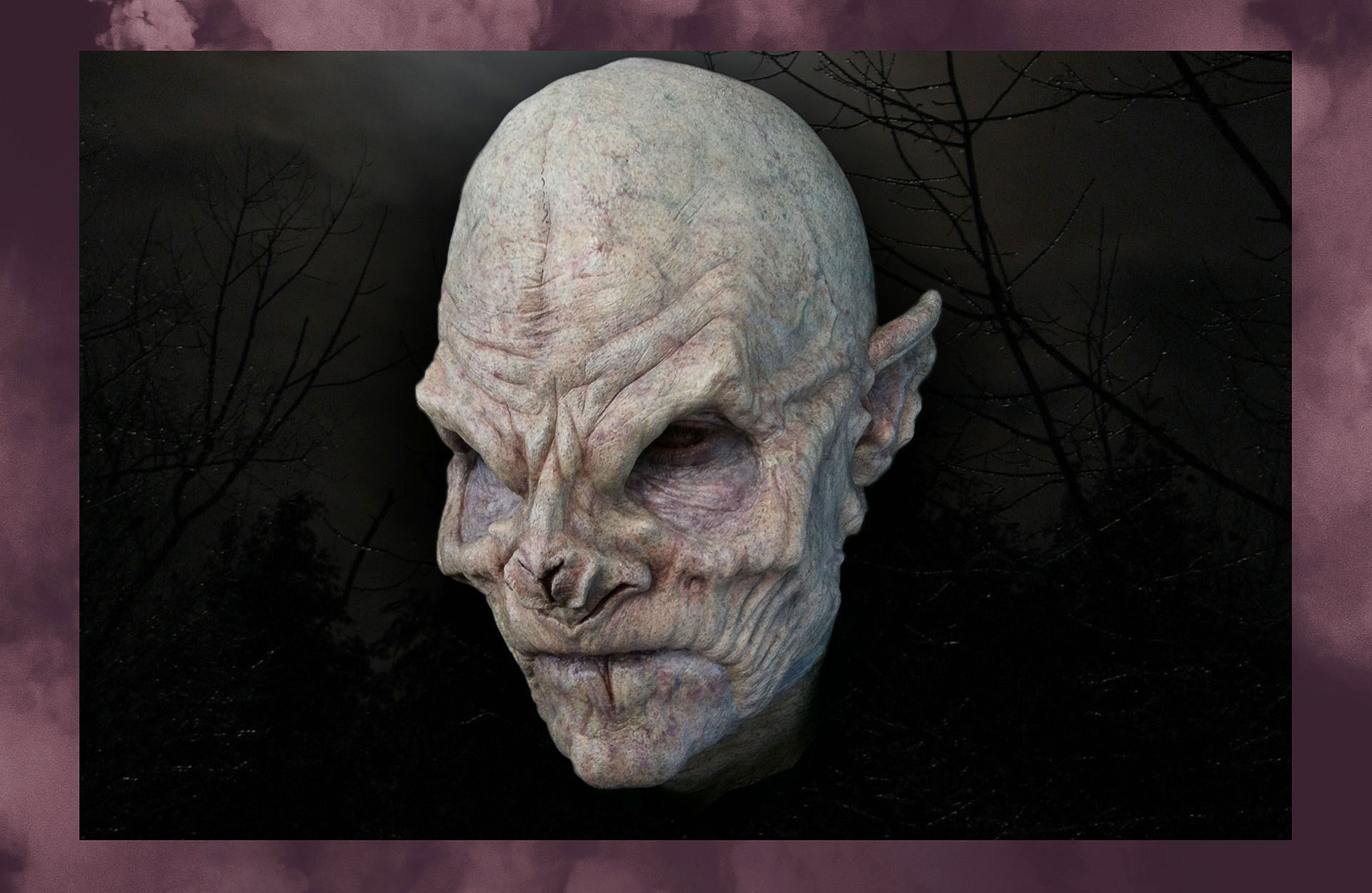 Making monsters comes naturally to Holland Miller. They’re part of his psyche already. So why not bring them to the big screen?

“I’ve suffered from sleep paralysis and intense nightmares my whole life. In eighth grade I decided to face my fears and went to the opening night of Nightmare on Elm Street. I didn’t sleep for the next two nights, but at the same time, I couldn’t get enough of it.”

The Blanche Macdonald graduate-turned-instructor had caught the bug that would lead him to become an internationally renowned Special Effects Makeup magician. Now he’s inspiring the next generation, on screen and in the classroom. You’ve seen his work in Deadpool, Death Note, Star Trek Beyond, Supergirl, The Magicians, Legends of Tomorrow, The Flash, The Cabin in the Woods, Elysium, Sucker Punch, Underworld Awakening, A Haunting In Connecticut, Fantastic Four: Rise of the Silver Surfer, Underworld: Evolution, The Chronicles of Riddick, Twilight: New Moon, The X-Files, Fringe, Supernatural, Once Upon A Time, Almost Human, Falling Skies, Stargate and (to the excitement of his current crop of students) Riverdale. It’s an incredible résumé, considering his makeup career’s unlikely beginnings. 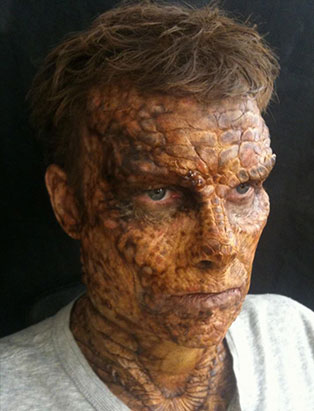 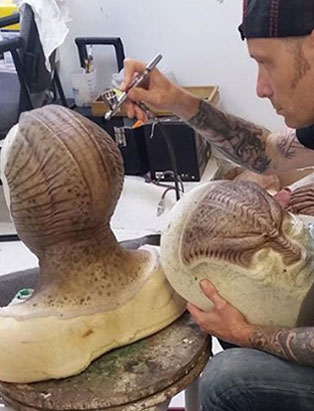 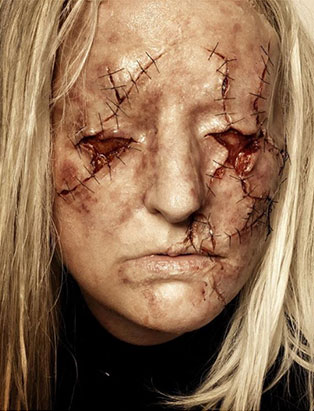 “By facing my fears I thought that when I did have these nightmares, I wouldn’t be scared. I wanted to know everything, so I bought all the Fangoria magazines and sci-fi and horror fanzines I could get my hands on. I went to community college when I was 17 and did some art courses. In a commercial illustration class I drew a coffin with a corpse coming out of it for a funeral home. I thought it was funny as hell. My instructors rejected it without even looking at it.”

With an artistic career looking unlikely, Holland enlisted in the US Navy. On duty in the Persian Gulf during the First Gulf War, the opportunity to reignite his creative tinderbox arrived unexpectedly.

People were blown away with how graphic it looked. Seeing how shocked people were with how gross and realistic they thought it was, I knew I could do this.

“We’d run emergency first aid simulation operations. They were looking for someone to simulate wounds. I told them I was into horror movies. I had cotton, latex, rubber and little bits of plastic. I made a broken femur and tibia from what I remembered from Fangoria. People were blown away with how graphic it looked. Seeing how shocked people were with how gross and realistic they thought it was, I knew I could do this.”

Holland left the Navy and moved to Victoria, BC. Now in his early 20s, the time was right to chase his dream career.

“My friend Brandy McQueen had studied Makeup at Blanche Macdonald. She told me they taught kit effects. I took a look at the portfolio of work coming out of the school and started the program.”

The military man with a taste for the macabre threw himself into the less gruesome side of makeup artistry.

“I learned so much every day. I’d never done a beauty makeup before I came to Blanche. When I got to the special effects makeup part of the program it was like instinct. It came so naturally to me. I knew the business was hard to get into, but it was what I wanted to do. When I had free time, I’d do my own effects projects.” 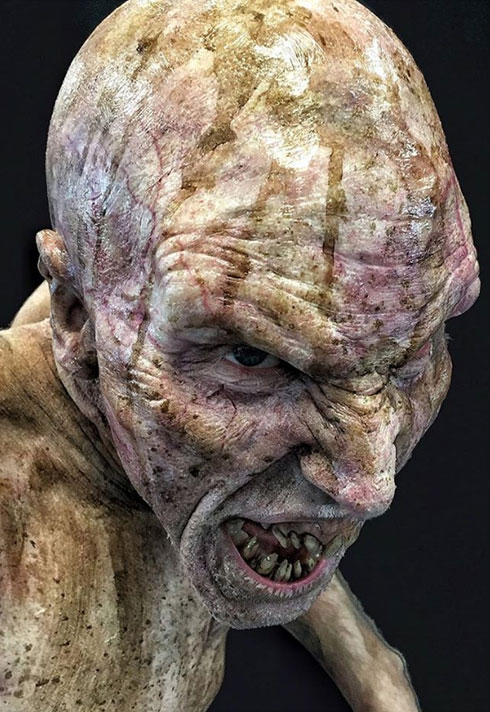 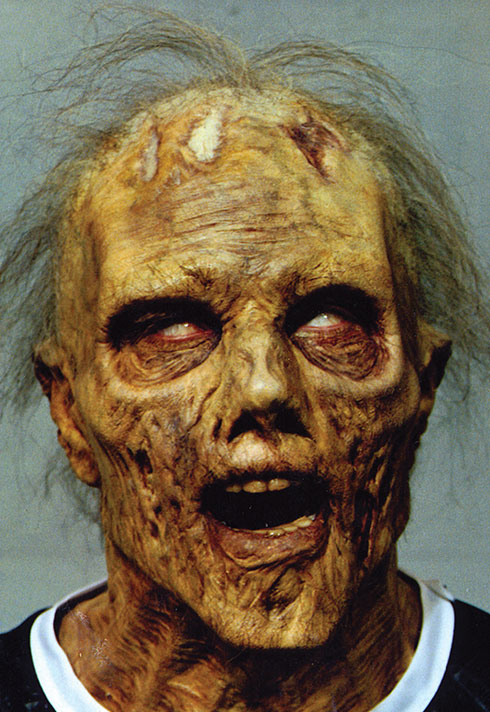 “He was working on Millennium, The X Files, a feature and was swamped. I went in, did an interview and was hired on the spot. Working in the lab was fun, and when I started knowing crews and directors it became really fun. I was teaching myself and learning from my co-workers.”

Holland worked in the Lindala Schminken Lab for two years before being called to set. It’s a day he can still recall vividly.

“It was a horrible,” he laughs, “a 6am call in February for The X Files. I was all by myself for nine hours in the cold and damp. As I got out of the car I stepped into a puddle. My feet were wet the entire time. I think Toby did it purpose to see how tough I was.”

Holland could handle the adversity, and after several happy years working with Toby, another special effects makeup superstar sought out his talents. Looking for help on Stargate, Todd Masters of MastersFX asked if Holland was available for five days of work. He’s been part of the team ever since. He’s won a Leo (for Sanctuary), a Gemini Award (for Stargate: Atlantis) and was the lead on-set Prosthetics Artist on Underworld Awakening. But some of his very favourite creations took life during his multi-series run as on-set effects artist for cult sci-fi series Fringe. 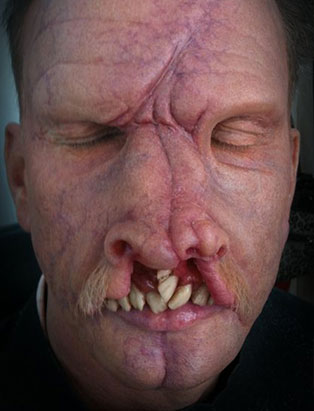 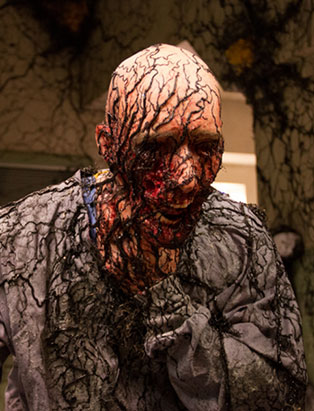 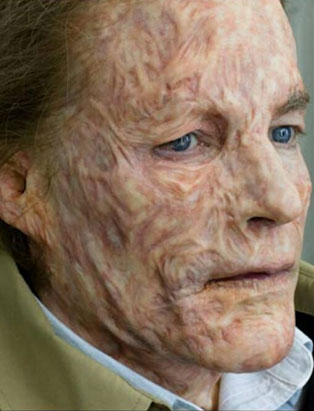 “Fringe was so much fun because it was basically a variety show every week. There was always something different. Many makeups were challenging because we’d never done anything like that before. The scripts were bizarre, but we’d make it work. There was an entire team hard at work at the MastersFX shop sending me stuff on set, where I’d glue them on and refine them.

“I had to do a reverse aging on John Noble, making him look over twenty years younger. We went back to basics and used pulls and tethers that we glued to the skin that pulled it back, like a facelift. My colleague Mike Fields came up with a design for a rig that we could hide in his hair. My assignment was to come up with pulls that were going to be strong enough and tabs that could stay down for 16 hours a day, yet couldn’t be seen. Reverse aging had been done before, but not to the extremes Mike and I took it without digital enhancement.

Fringe was so much fun because it was basically a variety show every week. There was always something different.

“In another episode two universes collided and one character’s two bodies fused. So he had his own upside down head fused onto his real head. The team at MastersFX made a beautiful silicon mask for me to put on the actor. I glued the mask on, blended it so it was seamless, put the hair on, and integrated all the paint so you couldn’t see where his skin started and the mask began. It had a mechanical eye and jaw that could move.” 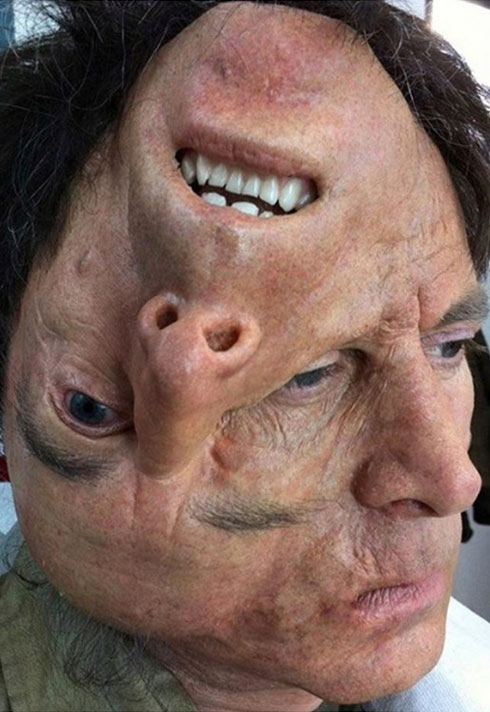 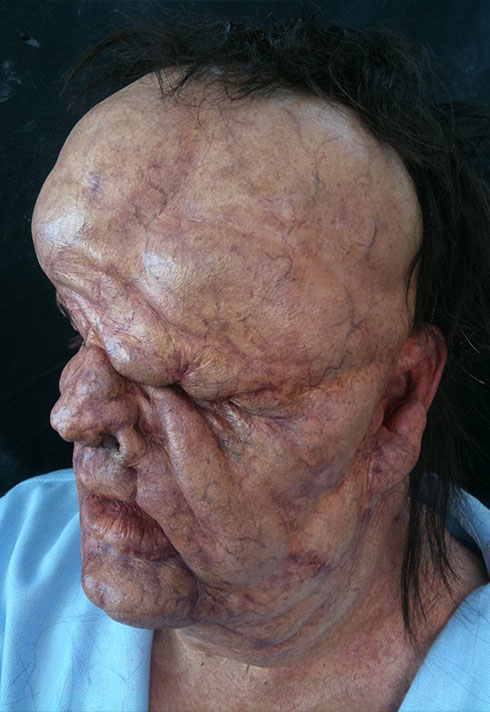 Fringe ended and Holland moved onto the sets of Almost Human, Falling Skies and, a particular favourite, RL Stine’s Monsterville: Cabinet of Souls.

“Monsterville had a lot of cool prosthetics. Kids would get their souls taken away and transformed into monsters. We were doing witches, demons, gargoyles, werewolves and trolls. It was different every day.”

The on-set prosthetics specialist faced a new set of demands when he was invited onto the Makeup Team for A-list blockbuster, Star Trek Beyond. Challenge accepted.

“Joel Harlow’s shop needed painters to prepaint the prosthetic appliances. I warned them that I hadn’t worked in a prosthetics shop since 1999, but they were happy to see what happened.

“Getting back into that environment was awesome. When you’re applying Makeup on set you’re always hounded for how long it’s going to take. You rarely get the time you want to finesse everything. Prepainting in the shop, finessing everything was more than encouraged. It was expected. Your work might appear on an 80-foot Imax screen, so it needs to be perfect.

“Any time you’re challenged to do something difficult you’ve never done before is only going to make you better. Plus I was surrounded by insanely talented Academy Award-winning artists from LA who’d worked on some of the greatest films ever made. Working with people with different processes is always going to make you more creative. It was awesome just to be involved in that process.”

I see Blanche Macdonald students in the industry everywhere. That’s a reflection of the teachers that are teaching here. The students are hungry to learn, so there’s an energy here that I really enjoy.

That process becomes even more entertaining when you end up recreating a story you’ve loved for years. Bringing manga classic Death Note to the screen with Lindala Schminken FX was one of those opportunities.

“I loved being able to pay homage to something I that influenced me. I worked on the Ryuk demon and all the deaths on the series. The Ryuk suit was made in the shop and on set we put gloves on him, pull the mask over the top, blended the colours and took care of keeping him cool. I’m proud that I got to be part of something I loved growing up.”

Now Holland is inspiring tomorrow’s great Monster Makers; explaining the processes of Hollywood’s Makeup elite at Blanche Macdonald and seeing students make their mark on TV and film sets across Vancouver and beyond.

“I see Blanche Macdonald students in the industry everywhere. That’s a reflection of the teachers that are teaching here. The students are hungry to learn, so there’s an energy here that I really enjoy.” 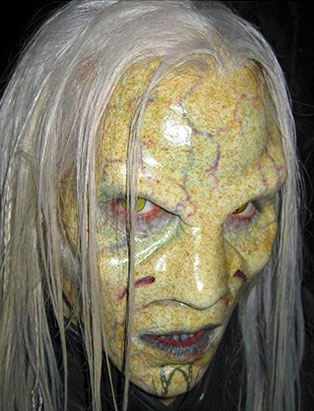 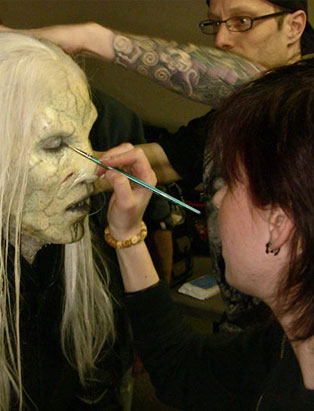 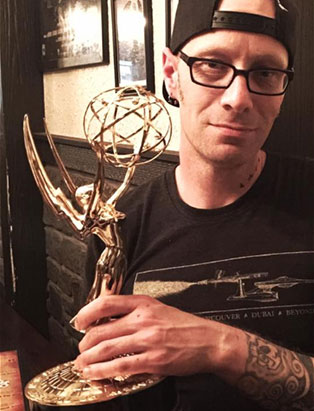 Holland does more than deliver Makeup Effects techniques direct from the world’s biggest productions. He’s also a voice of encouragement.

“Makeup effects as a career is totally doable,” he insists. “You just have to be better than the people you’re competing against. You have to have something the person who’s hiring you will notice, whether it’s your personality, charm or artistic merit.”

Holland continues to grab people’s attention, while mining daily inspiration from the darkest corners of his subconscious.

“I’m still scared when these nightmares happen but I’ve learned to embrace it. Let’s take the things that scare me, and scare other people!”