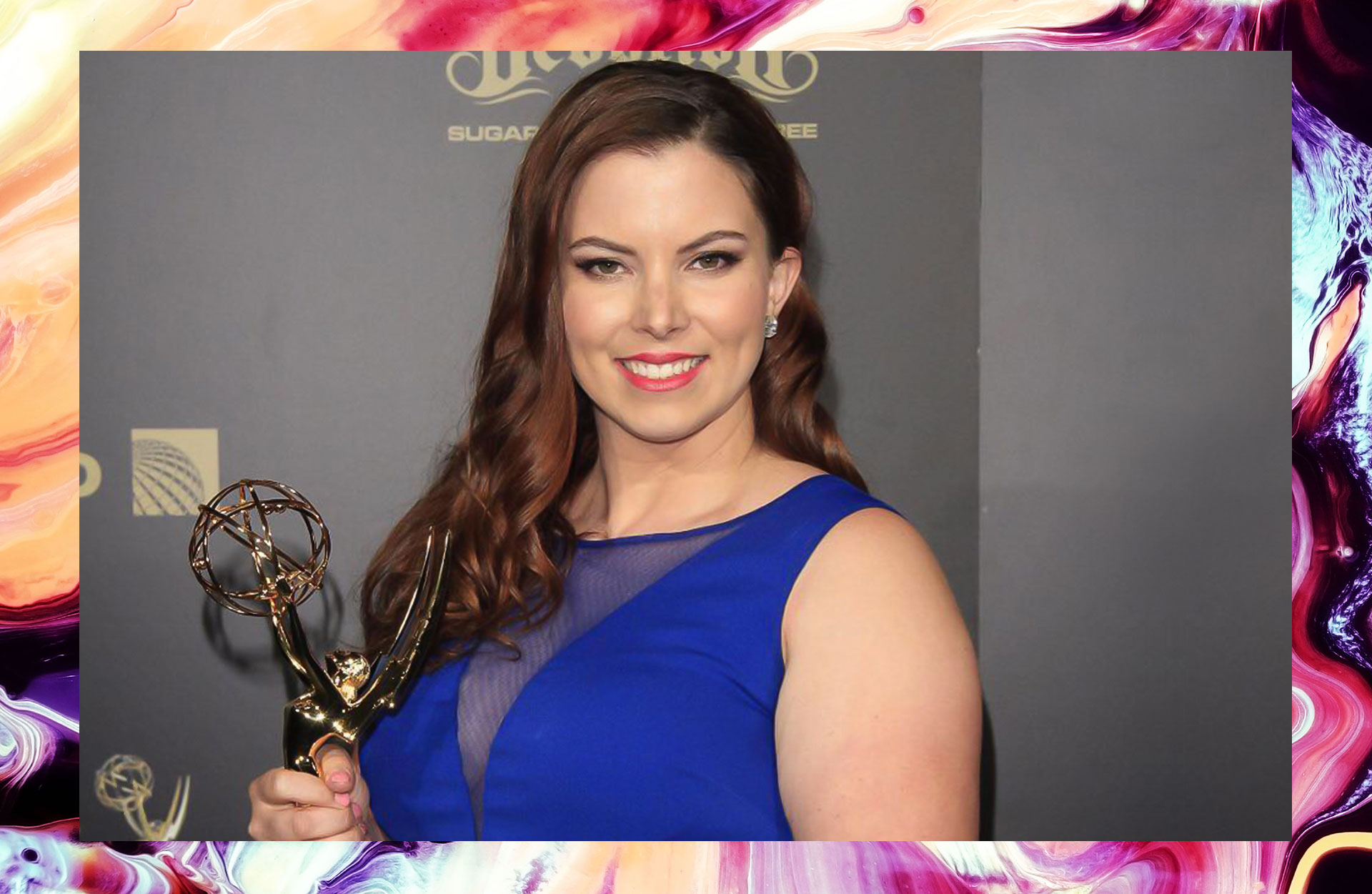 Waiting for a major award to be announced can be a nerve-wracking experience. For Blanche Macdonald graduate Film and TV Makeup Artist Jenna Servatius, sitting in the Pasadena Civic Auditorium with the rest of the Toronto-based Sinking Ship Entertainment team at last year’s Daytime Emmy Awards, minutes felt like hours.

Jenna had been nominated in the category of Best Makeup for her work on Odd Squad, the ever-fun educational children’s show beloved around the world by both kids and their parents.

“I was against some pretty substantial shows,” recalls Jenna. “Household names like Live With Kelly, The View and The Talk.

“When they came to my category and called my name our section stood up and roared. My first thought was ‘What should I do with my purse?’ I was suddenly completely uncoordinated. It was a euphoric moment for sure!”

Jenna deserved her moment of triumph. As Head of Department for Odd Squad since the beginning of Season Two, she’s expertly balancing the creation of over-the-top villains with the added demands of working with child actors.

I always loved movies and the behind the scenes stuff. I worked in a movie theatre but nobody ever told me that there was a possibility of film as a job.

“Working with kids comes with challenges but I find it really rewarding,” she continues. “They’re not jaded like adults can be. They’re genuinely excited to be there. I work on kids ranging from two to 16. Our process times are incredibly fast. We get an average of five to ten minutes in the chair for hair and makeup for every kid. Children can legally only be on set for a certain amount of time, so naturally that time needs to be spent with them on camera. When I go to another set I feel like I’m on vacation! The skin challenges are very different too. Our lead last year had the craziest cystic acne that appeared overnight. Poor guy!

“I started off on Odd Squad as an assistant. Then the Key Makeup Artist for Season One decided to take another opportunity shortly before we started shooting Season Two. There was a mad flurry. It was difficult to find someone who could keep up with the pace so they asked me! Once we made the transition and added a Key Hairstylist we were put to the task of recreating characters established in the first season. The Key Hairstylist remade all the villains’ wigs but lots of those villains have fantastical makeup that I had to try to deconstruct and figure out how it was all done. I enjoyed doing that and was able to add my own touches, but I was really excited when new villains and characters were written in. That opened up a lot of creative opportunities for me.

“The villains are the most fun part of the show for me. I created the Ice Troll with prosthetics and I even made some of the pieces in her wig. Freeze Ray Ray is a fun one. His hand is in a protective case, inspired by David Duchovny’s character in Zoolander. Party Pam is a fun villain too. Her character is hilarious. She was inspired by a 50s housewife and a Harajuku girl. It’s a fantastic show!”

Growing up in the Northern BC town of Prince George, Jenna didn’t see international award shows or even makeup in her future. She barely knew that kind of career was possible.

“I always loved movies and the behind the scenes stuff. I worked in a movie theatre but nobody ever told me that there was a possibility of film as a job. I didn’t know anybody that worked in film. A friend of mine had a friend who went to Blanche Macdonald and when I looked up the school it had great reviews. I knew I wanted to do something that allowed me to be creative and still work with people.

“I loved the classes and teachers at Blanche from the beginning. I’d done a lot of art in high school but wasn’t really doing makeup in Prince George, so I enjoyed the challenge of transferring my art from paper to people. It wasn’t overwhelming, more like a natural transition. I had good grades in every class. I’d gone to Makeup School not thinking that I would go into TV and film. I wanted to see what would happen.”

What happened was that Jenna made a positive impression on instructor Jennifer Folk, who recommended the talented young student to assist on a music video for Vancouver heavy metallers 3 Inches of Blood. The rest, as they tend to say, is history.

“We killed off all the band members!” laughs Jenna. “From the moment we stepped on set I loved it. We shot it in the basement of an old ballroom off Hastings Street. It was so sketchy but an awesome experience. My adrenaline was flowing. I was bitten by the bug!

“I volunteered all the time. I worked at Paralympic Opening Ceremonies and a bunch of charity events. If they put an event up on the volunteering board I would add my name. The Career Directors were strong advocates for getting yourself out there. I wasn’t from Vancouver so I knew I had to meet people. I liked getting out of my comfort zone too. You never get anywhere if you don’t get out of that zone. I did six weeks of volunteering on the Lancôme Counter at The Bay. I didn’t love retail but it was a very helpful experience. It’s how you learn about products and get used to working on different faces.”

Jenna was working her way into the Vancouver film and TV industry as Tana Moldovanos brought her on as a regular assistant on a series of Hallmark and Lifestyle shows. But when an opportunity arrived to make a move to Toronto, Jenna packed up and headed east.

You never know what small job is going to turn into something great. Never say no!

“I naively thought I could come to Toronto and start working. It’s a lot harder than just reaching out to FX houses and being offered a job. Luckily, my neighbour was a director/producer and his brother Ron ran Stefaniuk FX Studio. Ron was looking for people to volunteer.

“My first day there was an 18-hour day building a giant whale for a Comcast commercial. I loved every moment and came back the next day for another 15 hours. We finished that whale in about a week. I knew the fundamentals from my time at Makeup School but had never worked on anything that scale before.

“I think they liked me because I showed up every day and didn’t complain! Right after that they hired me. I was there for about eight months. We ended up working on a show called Annedroids. I was needed for a couple of days on set and the production company, Sinking Ship Entertainment, liked having me on there. I’ve been part of the Sinking Ship team ever since.”

As the Head of Department for Sinking Ship productions Odd Squad and Dino Dana Jenna stays more than busy. But she’s still always looking to expand her skill set with opportunities away from children’s TV.

“I wanted to start building my career with the IATSE union. I wanted a different challenge and to assist other artists. A friend recommended me for the movie Through Black Spruce. It was filmed in Toronto and some rugged areas further north near Sudbury. I wasn’t the producers’ first choice but the original Head of Department quit after a couple of days so they came back to me! I told them I’d be there the next day and was thrown into everything.”

As a Head of Department Jenna is always on the lookout for talented aspiring film and TV Makeup Artists. It’s a dream job for sure, but it takes more than makeup expertise to become a member of Team Jenna.

“Attitude is more important than ability,” she insists. “I can teach you tricks to get over something you’re having a problem with but I can’t teach you to be cordial and respectful. You have to read actors’ body language. When’s an appropriate time to have a fun conversation and when it’s time to be quiet? That’s not something I can teach easily. I like an assistant willing to ask questions and listen to the answer. I don’t like repeating myself over and over again.”

Most importantly, she’s looking for artists eager to seize opportunities.

“You never know what small job is going to turn into something great. Never say no!”