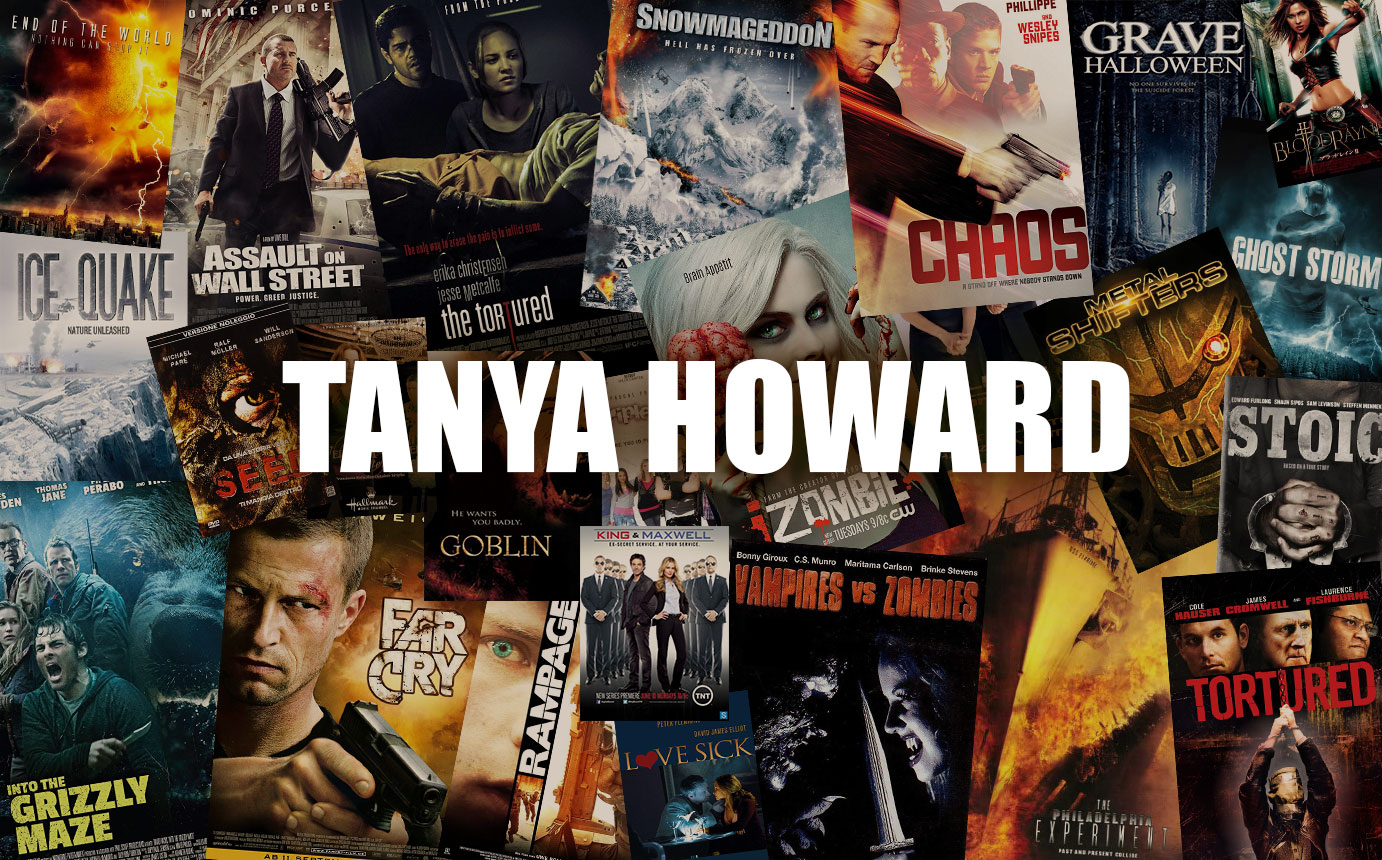 Tanya Howard knows hard work. As the Head of the Makeup Department on high profile shows including Arrow, Wayward Pines, The 100, Emily Owens MD and Human Target she appreciates the effort it takes to create on-screen magic.  She’s understood since the first time she was given the ultimate responsibility to get the job done.

“My first IATSE Union Head of Makeup Department credit was in a movie called Chaos,” she recalls. “I was originally interviewed to be a Second First Assistant. There were problems with the schedules, the pay cheques and the original Makeup Department heads, so the Production Manager eventually asked me to take over. Because the production had been halted so often we’d reached a point when we only had one of the leads, Ryan Phillippe, for a week. To shoot all his scenes we would work all day with the Main Unit and all night with the Second Unit. I would sleep in the trailer for maybe an hour before starting with the next unit.”

Long hours hold no fear for Tanya, not least because those hours are so enjoyable. A happy team is a productive team.

“Years ago, I called my dad in tears because I wasn’t sure this business was going to suit my personality. I watched many people being treated horribly – including myself! He asked me, ‘What do you need to do in order for that not to happen?’ I said, ‘Well, I’d have to be the boss’ and he said, ‘Then be the boss!’ I worked as hard as I could to become the Head of the Department and I make sure my team is treated with respect and kindness. I never want anyone to be treated poorly. Without my team and their talent, commitment and incredible personalities, accomplishing any show would be impossible.”

To this day I think Blanche Macdonald is the best school. I never thought I could be where I am today.

A strong work ethic was instilled in her at the young of 12, living in Stoney Creek, Ontario with her sister and having to help pay the rent and bills.

“It was fight or flight type living,” she explains. “We learned to survive. Without my sister Tammy I don’t know who I’d be today. Her support meant the world to me.

“When I was 13 I worked late at a fast food place and I’d get home at 3am. My first class was Geography and my grades suffered from lack of sleep. Four days before Grade 12 started my dad flew me across Canada to Campbell River, BC. I had to retake Grade 9 Geography to graduate. I passed and was on the Honour Roll.”

Growing up helping friends and family with their makeup for events and nights out, when Tanya moved from the Island to North Vancouver it made sense to use those skills to start making connections.

“I started volunteering at the Presentation House Theatre doing Makeup. A few actors I worked with hired me for some short films and features. I enjoyed it so much I decided to enrol at Blanche Macdonald. I knew opportunities were there in the industry. I knew 100% this was what I wanted to do.

Blanche really did give me the push I needed to feel confident that I could do it. They prepare you really well... they were so inspiring.

“To this day I think Blanche Macdonald is the best school. I never thought I could be where I am today. Blanche really did give me the push I needed to feel confident that I could do it. They prepare you really well. I had really great teachers who helped me tremendously. They were so inspiring. They saw I had potential and they encouraged me. Holland Miller was my Makeup Effects instructor. He could see how determined I was and told me to never give up. That was a huge turning point for me. I will forever be grateful to him.

“Of course, I was nervous when I first came to set, but I also felt prepared. Years later, Holland came in to help me do bald caps on Emily Owens. I almost passed out I was so nervous and excited to be working with my FX mentor.”

Tanya was still a student when she began to understand how far Makeup could take her.

“I started shooting with photographer Jonathan Vonn on a series of ads. You can imagine my excitement when I was driving down Granville Street and saw my makeup work on a huge billboard! I pulled over, took a picture and did a little dance!”

Tanya knew she was ready, but she wasn’t afraid to develop her skills outside the classroom. One of her theatre group friends opened up a horror studio called Creepy Six Films, and called on the young Makeup Artist to head their Effects Department.

“I was able to work with Brinke Stevens on the movie Carmilla: The Lesbian Vampire. She’s the scream queen of horror films since the 1980s – the ones I watched as a teen. One day she asked me who my inspiration was. I told her Tom Savini. She grabbed her phone and called him. She handed me the phone and I talked to him. Amazing!

“Because I was able to work on these horror films my work was printed in Rue Morgue magazine. That was such an honour.”

Brushes with legends weren’t the only benefits of her time with Creepy Six. She also learnt to create magic from the bare minimum.

“They didn’t have a prosthetics budget. I only had $25 a day to work with. It was fun because I was able to practice a lot and really think creatively. If you can take something out of your kitchen and make it work, in the long run you can create anything. Even today solving problems is what I do on a daily basis. All my shows have been difficult. I always have challenges and every day we have to make it work. If I had an easy show I don’t know what I’d do with myself.”

Tanya was more than ready by the time Blanche instructor Leah Ehman invited her onto the Makeup Team for her first feature, I Robot, starring Will Smith.

“Working with Leah was incredible. She taught me a lot and allowed me to be creative. The challenges were still there. The main difference was my pay cheque!

“My Dad took the family to see the movie in Nanaimo. At the end, when the credits started and people stood up to leave, he told the entire cinema to wait for my name. Everybody sat down and clapped when my name appeared!”

My Dad took the family to see the movie in Nanaimo. At the end, when the credits started and people stood up to leave, he told the entire cinema to wait for my name. Everybody sat down and clapped when my name appeared!

Tanya’s tale can give the impression that a career in TV and Film Makeup is a series of inspirational moments. That’s half of the story. The other half is an unrelenting commitment to the job and everything that comes with it.

“The 100 was the toughest show I’ve ever done. . We were building a world of post-apocalyptic creatures and tribes. Each had its own style of tattoos and war paint. It was cool to create from the ground up but it was also tough, with long hours spent outside in a rainy forest. The character Lincoln, played by Ricky Whittle, is often shirtless so you can see his tattoos and scars. To get them done Ricky and I would be there for four hours before anyone else arrived and another three hours after that.

“Max Schmeling was a movie filmed in Germany and Croatia about the German heavyweight World Champion. It was his life story from the 1930s until the 2000s. Doing make up for each decade was so much fun. It was an extremely challenging but it was amazing to have the opportunity to be a part of such an incredible feature and to have the chance to work and travel in Europe.

“We were shooting in a huge arena when one of the set lights fell from the ceiling, smashed into me and my assistant’s faces and knocked us both out. She went to the hospital. I should have gone too but I refused. I needed to make sure I was there for continuity. Because it was a true story and it was based on actual boxing matches I needed to make sure each wound was what really happened in each fight.”

Tanya’s professional philosophy may be based on love and kindness, but those attributes are paired with an inner fortitude that’s helped her through the toughest times. That’s exactly what she’s looking for from up and coming Makeup Artists.