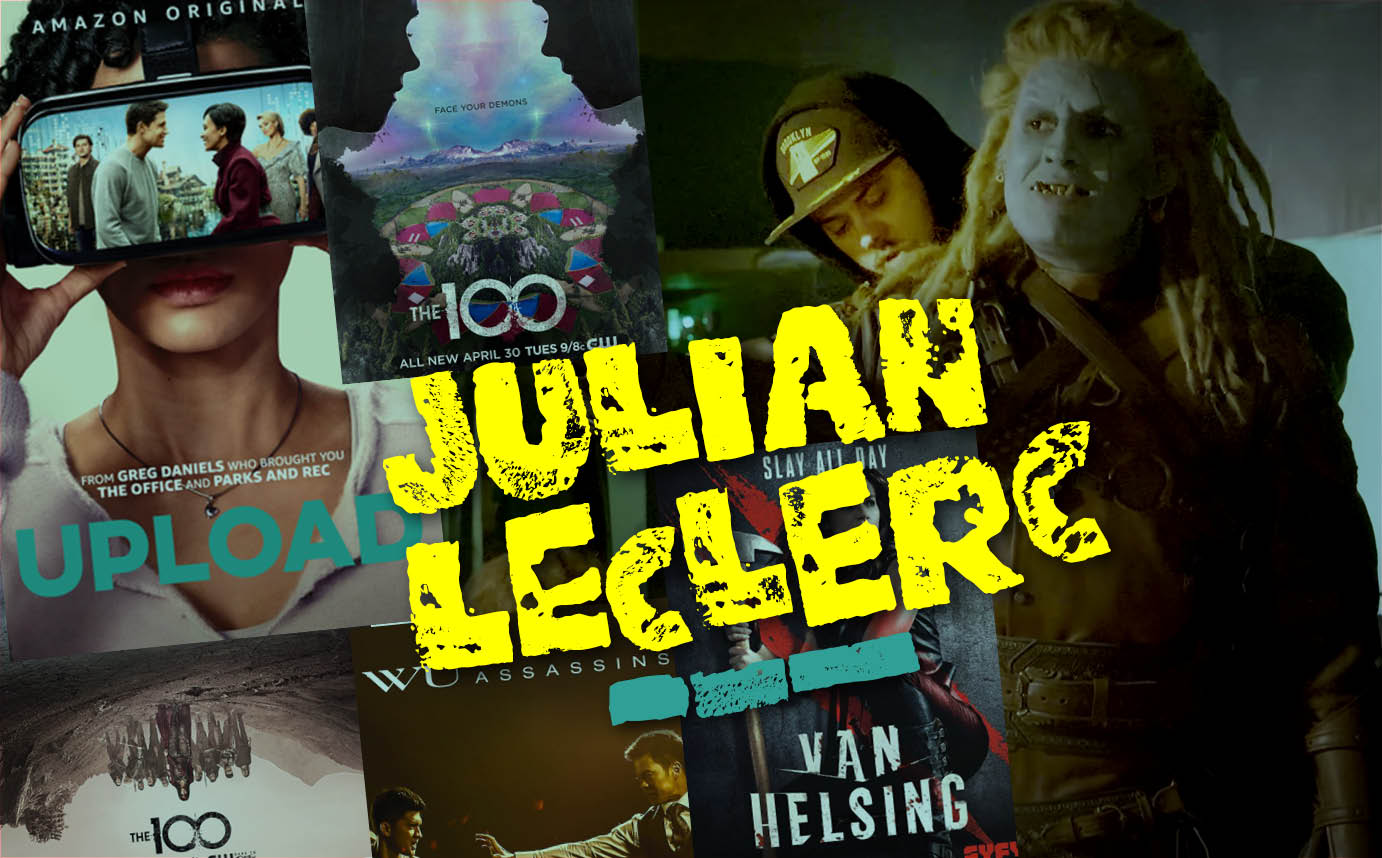 Where does Costuming for TV and Film end and Prop Work begin? For Blanche Macdonald Fashion Design graduate Julian LeClerc, there’s not a simple answer.

“When I was working on the Amazon series Upload the Designer came to me looking for a Virtual Reality suit that enables the wearer to feel the environment they’re in,” he explains. “They wanted latex tentacles that looked like the fingers on a rubber glove. It was my job to figure out how that would be possible. I got a custom-built wet suit and made a grid of rounded dowels, dipped it in latex, cured it and made this insane dangling finger suit. That was one of the most creative things I’ve done. Most people would say it looked gross, but I thought it was hilarious.”

(The Designer) wanted latex tentacles that looked like the fingers on a rubber glove. It was my job to figure out how that would be possible.

Thinking outside the box is familiar creative territory for Julian. It’s part of who he is, and he’s been that way since he was a boy growing up in the Northern BC city of Fort St John.

“It’s a small town that has one direction fashion wise. I chose to dress differently and colourfully, which didn’t give me the easiest life. It was part punk and part metal inspired, but with a lot of colour. I’d dress punk one day, then wear a suit the next. I liked to change it up.

“Most people from Fort St John stay and work in the oil fields. I wanted to move to Vancouver but I didn’t want to go there without a plan. My Mom was a really good artist and a hobby sewer. She taught me how to use a sewing machine. Growing up, I’d always wanted to have my own skate and snowboard line. I randomly started investigating fashion courses one night. I flew down to Vancouver to hang out with my cousin for his birthday in May. I visited Blanche Macdonald while I was there and started the Fashion Design program that September.”

“I’ve always loved working in fast-paced environments. I do my best work the hour before deadline. That’s my zone. That level of intensity is where I have the most fun.”

His year in the Fashion Design program climaxed with the first of many triumphs, as his post-apocalyptic-inspired collection, incorporating military shapes with repurposed and natural textiles, was strong enough to see him named his year’s Award-winner for Achievement in Design.

“I had a lot of fun doing my final project, I even decided to redesign and re-illustrate everything in my portfolio not long before the actual show. Seeing my first piece walk down the runway was more emotional than I’d anticipated. I was awestruck to see my collection on the runway.”

Julian would have been forgiven for taking some time to bask in his achievement. But the designer from Northern BC was already onto his next challenge.

I was already working in film by the time of the Grad Fashion Show.

“I was already working in film by the time of the Grad Fashion Show. [Career Director] Mel Watts had mentioned film to me and I connected with Derek Baskerville who teaches the Costuming course on the Fashion Marketing program. They put me in touch with a Costume Designer and I started working on Movies of the Week in the costuming department. The first show I was on was Stephen King’s 1922 which was a period piece filmed in some really cool places.

“At first I wasn’t thinking of it as a career opportunity, but once I got on set I remembered how much I love peering behind the scenes. I was always the kind of person who watched hours of bonus behind the scenes footage on DVDs! I realized this was what I wanted to be doing. Being on set and in the middle of everything was amazing. I loved seeing things like the guy pulling an elevator door open and closed for eight hours!”

Julian connected with fellow Blanche graduate Claudia Da Ponte for a handful of shows, before a posting on an industry Facebook page opened a door to opportunities he’d only dreamed about.

“The posting was looking for a lead breakdown artist in an apocalyptic vampire show. I’d never done that, but vampires and apocalypses are sweet! I showed them my portfolio and they hired me for season two of Van Helsing!

“Breakdown for costume is all about aging and dying. Everything bought off the shelf is brand new, so it was our job to shred it, cut it and age it. We’d put lighter paints on the garments so they looked worn, and we built specialty pieces as well.”

Van Helsing paired Julian with Emmy-nominated Costume Designer Farnaz Khaki-Sadigh. She was impressed with his abilities, and when she took the job on The 100, she took Julian with her.

Breakdown for costume is all about aging and dying. Everything bought off the shelf is brand new, so it was our job to shred it, cut it and age it. We’d put lighter paints on the garments so they looked worn, and we built specialty pieces as well.

“I’d always loved The 100,” continues Julian. “I ended up being the lead builder on that, working with a team of between four and six. It was only my second big show.

“Farnaz is an amazing Designer, but there’s still room to adapt what she’s creating. Often she’d give us a mood board and we’d take those images and design something from that. I have very fond memories of my time on The 100, even though it was stressful because I was in charge of a lot and still figuring out how to do everything. I’ve always loved working in fast-paced environments. I do my best work the hour before deadline. That’s my zone. That level of intensity is where I have the most fun.”

It was on The 100 where the fascinating grey area between costume and props planted the seed for Julian’s next creative adventure.

“I had to build some body armour and I ended up working with the props department. They made moulds and cast it for me. Then I put it together. I saw how cool it was and all the tools and machinery they were using.”

Inspired by what he’d experienced on The 100, Julian joined the team of a growing YouTube channel, A Filthy Lot, in the new role of Prop Master.

A good work ethic is going to get you far in film. The hours are long and it can be intense. The ability to work well with others is what defines you.

“Our dream is to let people be creative and make the kind of content that inspires them. I’ve written a few sketches and appeared in a few of them. We get to do a lot, which is really cool.”

Whether he’s creating costumes or props, Julian insists that even with all the skills in the world, a can-do attitude remains the essential ingredient for career success.

“A good work ethic is going to get you far in film. The hours are long and it can be intense. You rely on other people and they rely on you. Things can blow up and it’s up to you to keep cool and not let those situations get to you. The ability to work well with others is what defines you.”