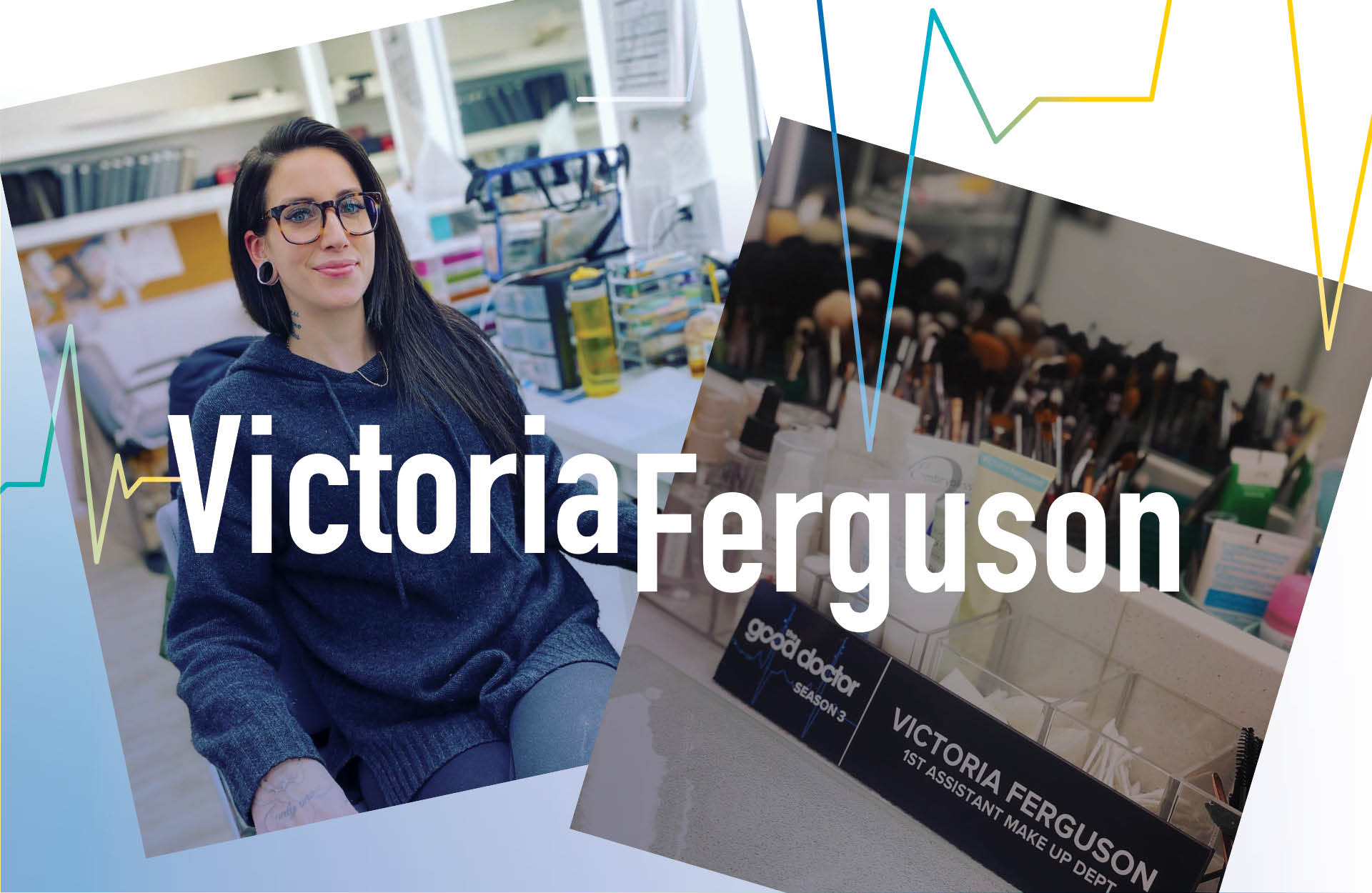 Life can be exciting on the set of The Good Doctor. That’s exactly how Victoria Ferguson likes it.

“When things don’t go as according to plan or they need something right now, you’ve got to do it,” she insists. “You have to be able to improvise with what you have. When those moments arrive I always say, ‘Ok I can do that,’ even though I don’t know for sure that I can. Even if it doesn’t look exactly like what I had in mind, everyone else still thinks it looks great. I’ll go with that. It’s all about teamwork.”

Victoria is the First Assistant Makeup Artist on The Good Doctor, the award-winning ABC show that happens to be the most-watched TV drama on the planet.

“Over 50 million people around the world watch The Good Doctor,” laughs Victoria. “The idea that so many people see my work makes me feel a little uneasy; a mixture between a flipped stomach and butterflies, even though everyone is extremely supportive and only have great things to say!

“One of my roles is doing the lead actress Antonia Thomas’, makeup. In the script she’s crying a lot as she faces a lot of challenges, so I’m always resetting her makeup and looking for the right products to maintain the perfect look. A lot of my work is a mix of beauty makeup, figuring out where spurting blood has landed on the cast during a gag, covering up actors’ tattoos or adding fake tattoos that create their characters.”

Becoming a Makeup Artist wasn’t always part of Victoria’s plan. She grew up in Winnipeg spending much of her time sketching and painting. It wasn’t until she began drawing portraits that she fell in love with the intricacies of the human face. She was investigating art schools where she stumbled upon Blanche Macdonald.

My TV and Film Instructor was Sydney Silvert. He was hilarious and I loved him. I was keen to correct mistakes. I wouldn’t get upset when I went wrong. I was patient. Motherhood teaches you these things. I love small details. I want everything to be real.

“I’d never touched a makeup brush before, but I trusted my gut. Two weeks later I was packing up my Grandpa’s Jeep and driving to Vancouver with my son.”

Having left junior high in Grade 9 after giving birth to her son, re-immersing herself into an educational environment wasn’t easy. Patience and perseverance helped turn adversity into excellence.

“It was the first time I felt challenged as an artist. I didn’t feel like I had the skills. Then my Fashion Instructor, Jon Hennessey, out of the blue said ‘You’re really great. I’d hire you straight away.’ I thought he was talking about someone else. Looking back, I think my strength was that I wouldn’t go overboard. I would watch and slowly do the details until the job was done.

“My TV and Film Instructor was Sydney Silvert. He was hilarious and I loved him. I was keen to correct mistakes. I wouldn’t get upset when I went wrong. I was patient. Motherhood teaches you these things. I would study a severed foot and how it rotted then recreate that. I love small details. I want everything to be real.”

Who you know can be as important as what you know, and the detail-oriented Makeup Artist had a passion for making connections.

“At Blanche Macdonald you’re part of a family. That includes teachers and other students. After I graduated Jon hired me for a Herschel catalogue, the ‘Nyce 2 Know Ya’ k-os video and another video for Marianas Trench. I wasn’t making money at that point but I was building my portfolio. Some of the other artists on those events I’ve kept in my inner circle on shows I’ve worked on.”

At Blanche Macdonald you’re part of a family. That includes teachers and other students.

With one foot in the industry and her reputation growing, Victoria didn’t let up. She began showcasing her creativity by building a stellar portfolio.

“I would set up all these shoots and invite everyone I knew – designers, stylists, and photographers—to collaborate. No one got paid but the agencies loved our work. I knocked on everyone’s door. When they said no I’d come back a month later. I’d always say, ‘Think of me if you need an extra pair of hands.’ I wasn’t presumptuous. But I was stubborn as hell.”

Even though she’d applied to become an IATSE permittee straight after finishing Makeup School, Victoria had always insisted that she wasn’t going to go into TV&Film Makeup Artistry. Instead, she developed her skill set designing looks for Cirque du Soleil in Montreal, immersing herself in New York’s makeup industry and making day calls on various shows. Her perseverance paid off with a makeup odyssey through history.

“That was Timeless with Sarah Graham. That was the show that made me decide I wanted to work in film. It showed me the calm in the midst of the storm and how no matter the weather, I was fit for the journey.

“Timeless was the most challenging show I’ve worked on to this day. Every episode was set in a different time period. There were different eras, a lot of people, challenging makeups and long hours. Sometimes I worked 19-hour days. We’d do night shoots and I’d get home at 7 or 8 am and need to get my son ready for school. I was helping with the main cast and in charge of background. Someone saw that I was running a tight ship and hired me for my next show, Van Helsing, Season Two.”

I had jobs where I’d had to cover my tattoos. In this industry I was able to be myself. There’s no judgment in my chair, just good laughs!

Along with slots on Altered Carbon and Lost in Space, Victoria worked with Blanche Macdonald graduate Zabrina Matiru on Supernatural. It was Zabrina who recommended Victoria to Tina Teoli, Head of the Makeup Department on The Good Doctor. After an informal interview over a coffee Victoria was hired on the spot. She’s been part of the team ever since.

“I never thought too hard about going into film,” continues Victoria. “It just felt like home. I had jobs where I’d had to cover my tattoos. In this industry I was able to be myself. I’m a lot like my Dad—super dry and sarcastic. Actors like that because they can get comfortable with me really quickly.  There’s no judgment in my chair, just good laughs!

“I love getting to know people. Every day I have someone new in my chair, which means there are a lot of different personalities. They could be method actors in character. They could have something major going on in their lives. I’m essentially a confidant. When people are sitting in your chair they open up to you.”

It’s only natural that people connect with Victoria. Her own open-minded approach to her art helped put her at the heart of the world’s favourite TV drama. That self-belief and willingness to take a chance on herself led to the creation of soon-to-be-launched line of skincare products, East 29th.

“People have always commented on my skin. I’ve been making my own products for a while. So many people asked me what I was using, I figured why not make it commercially? Skin is the canvas that we work on. Pores are like little mouths waiting to be fed! I took three months off after Season Two of The Good Doctor and started working with a lab to make it.”

That open approach is also at the core of the advice she’s happy to share with artists beginning their own Makeup journey at Blanche Macdonald.

“Shed the skin you come in with,” she insists. “You don’t need to be the best on day one. You should give yourself room to grow and learn. Relax and take in everything the instructors have to share with you. You don’t have to push boundaries to be a real artist. Some of the best Makeup Artists I know can do a natural makeup that makes the model look like they’re not wearing anything.

Shed the skin you come in with. You don’t need to be the best on day one. Relax and take in everything the instructors have to share with you.

“This is a collaborative art. 90% of my work is making the person I’m working on happy. If their character is dying of course I can’t make them look beautiful. But if I can correct some blemishes or fill in an eyebrow, viewers aren’t going to know and it helps the performer get ready and confident to go on set.