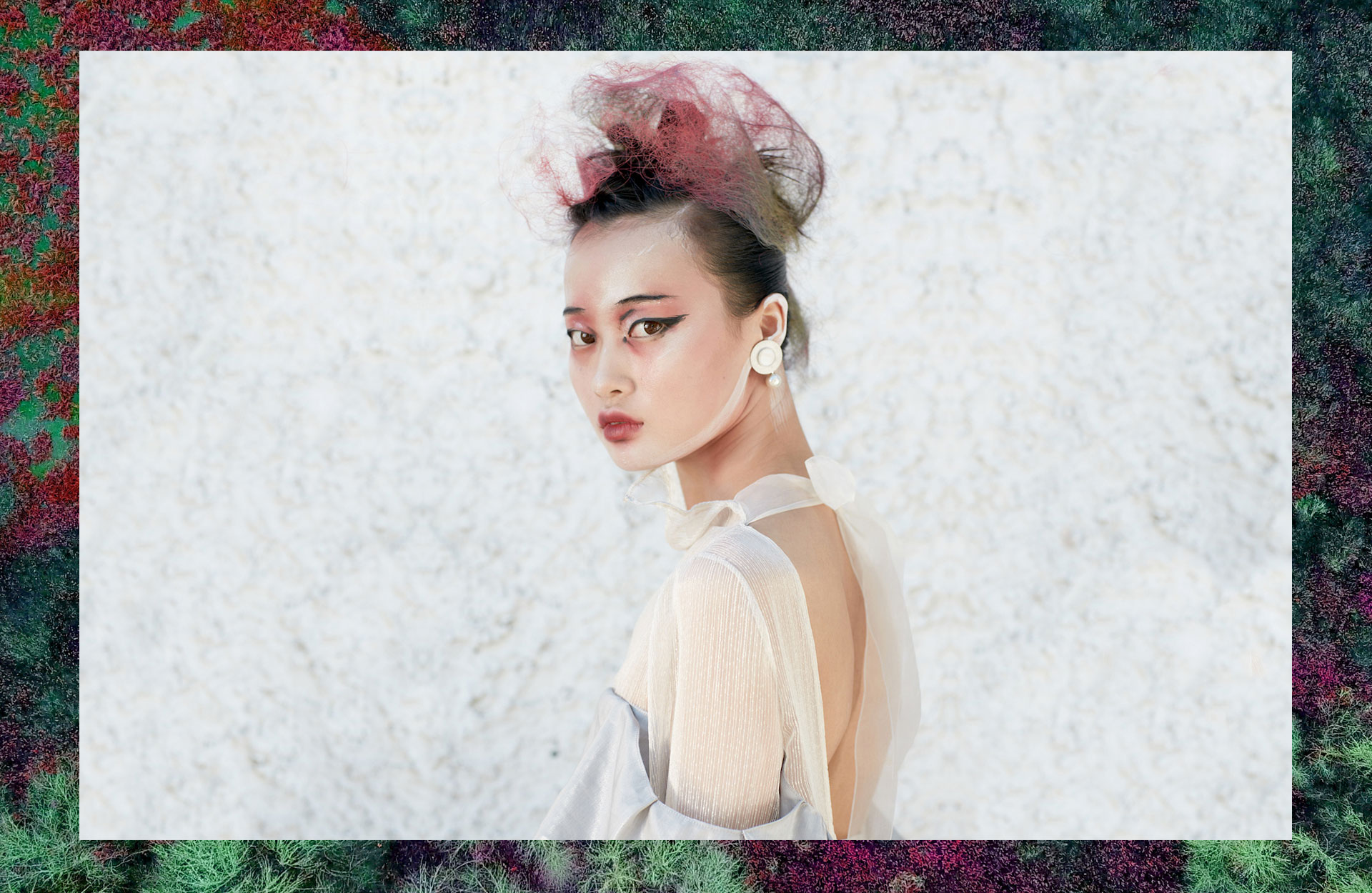 Jon Hennessey is Fashion Royalty. As a top runway Makeup Artist, the graduate-turned-instructor at Canada’s #1 Makeup School has hundreds of Fashion Shows in New York, Milan and Paris, and countless editorial and advertising shoots under his belt. He tours the World with the superstar educators of The Makeup Show. And somehow he’s found the time to put together one of Vancouver’s strongest creative teams with his NOBASURA Artist Management.

We feel blessed to have an artist of Jon’s international standing on the faculty at Blanche Macdonald. Talk to him for a few minutes and you’ll realize the feeling is mutual. 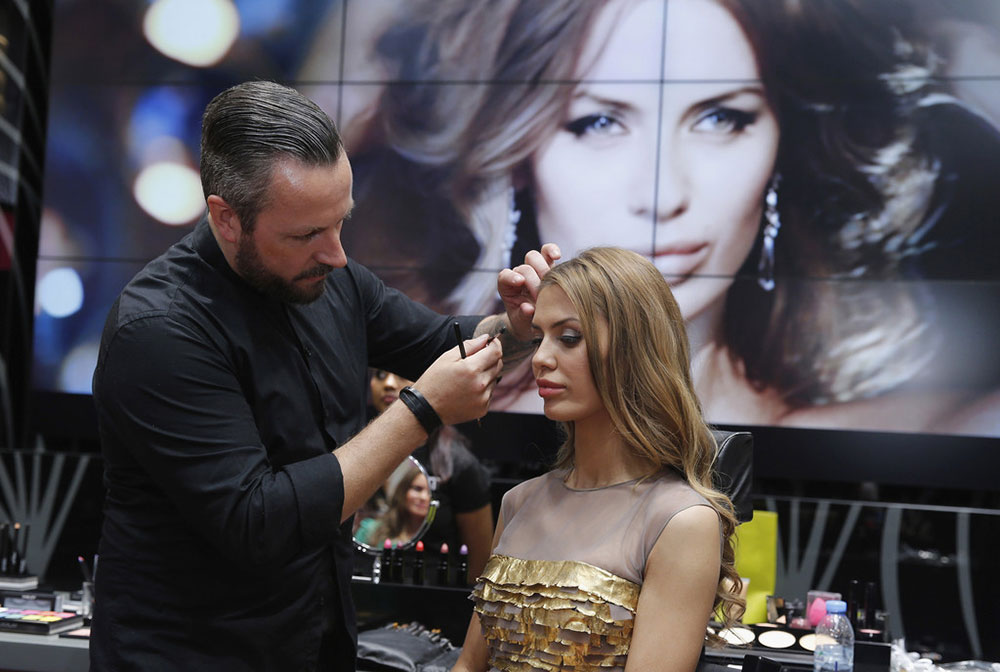 “I love it when I’m sharing my experience,” he explains, “and I see a certain energy being reflected back from students that are passionate and hungry and want to absorb as much as they can. I love sharing that information.”

Jon understands the power of inspiration. It’s at the core of his own journey into makeup.

Context is key. A makeup is finished when it works in the context of the overall image.

“A girlfriend of mine loved the process of applying her own makeup every day. I found it intriguing. Once a week we’d go to MAC from our home in Maple Ridge and she’d pick up some new lipsticks or eye shadows.

“I was thumbing through one of her issues of Vogue and there was a feature on Makeup Artist named Stephane Marais, showing his concept sketches and the finished faces on the runway. I could see this two-dimensional art form coming to life. I was 19, working in the produce department of a grocery store, and skateboarding every afternoon. I had no art background whatsoever. I hadn’t drawn or painted in high school. But I knew wanted to be involved in a creative industry. I picked up the Yellow Pages and looked for a makeup school. Blanche Macdonald sent me an info package and I signed up.” 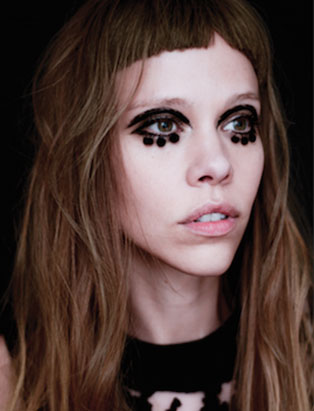 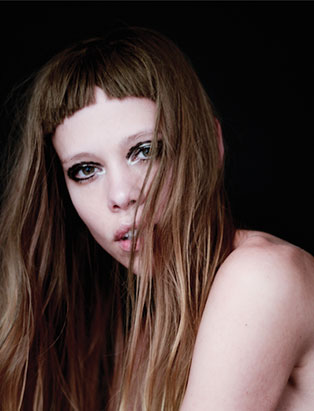 Jon’s initial aspiration was a post-graduation job with MAC (“As a skateboarder MAC’s rebellious attitude really appealed to me”). With that goal in mind, Jon added colour to his personal blank canvas.

“I had no preconceptions coming to Makeup School. I was a clean slate. I needed to learn how to hold a brush properly. I was learning a completely new craft. I can remember my time as a student clearly. I came away with a solid knowledge of how to move product around on a face and a good idea about texture. JoAnn Fowler was one of my instructors and we still keep in touch.”

To no-one’s surprise, the talented and instantly likeable young Makeup Artist was hired by MAC, and within a year he’d been promoted to the position of Technical Artist, travelling between locations for one-on-one appointments. When the MAC Pro Team was launched he was one of the six artists chosen to represent the brand’s artistic vision. Jon had gone global.

“I’ve always been ambitious. I wanted to learn more, do more and experience different things. I often bite off more than I can chew and figure out how to swallow it. That’s been my MO for the majority of my career,” he laughs. “I relocated to LA for MAC and would travel to shows in New York, Milan and Paris for the Collections. I was 24 when I went to my first Paris Fashion Week. My first show was for Kostas Murkudis, who was Helmut Lang’s right hand man. The key artist for that show was Sharon Dowsett. It’s customary for the key artist to do a demo of the look you’re going to do for the show. She put a stroke of colour underneath each eye – blue and purple with a touch of glitter – and nothing else. The end result was so simple and raw and had such a rock and roll feel to it, when you saw the girls walking the runway, there was no better choice for that show than Sharon’s minimalist approach. 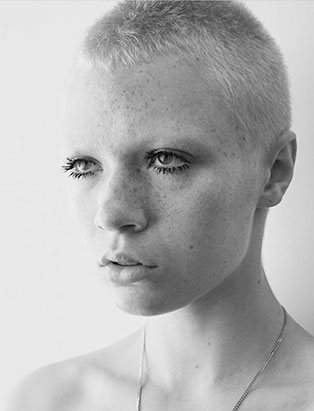 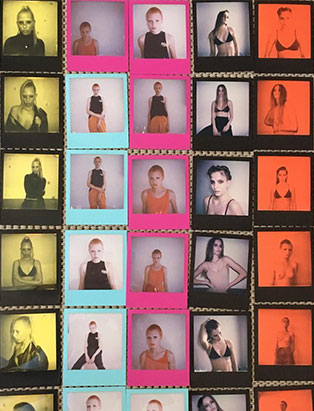 “That experience completely changed my approach as a Makeup Artist. It redefined what I considered to be a finished Makeup. I have images in my portfolio now where faces have just been moisturized and the model’s brows have been combed. Context is key. A makeup is finished when it works in the context of the overall image.”

If you think crossing the globe working with top designers, models and celebrities would be a fun way to spend your 20s, well, you’d be right. Still, life as a planet-trotting makeup artist comes with some challenges. 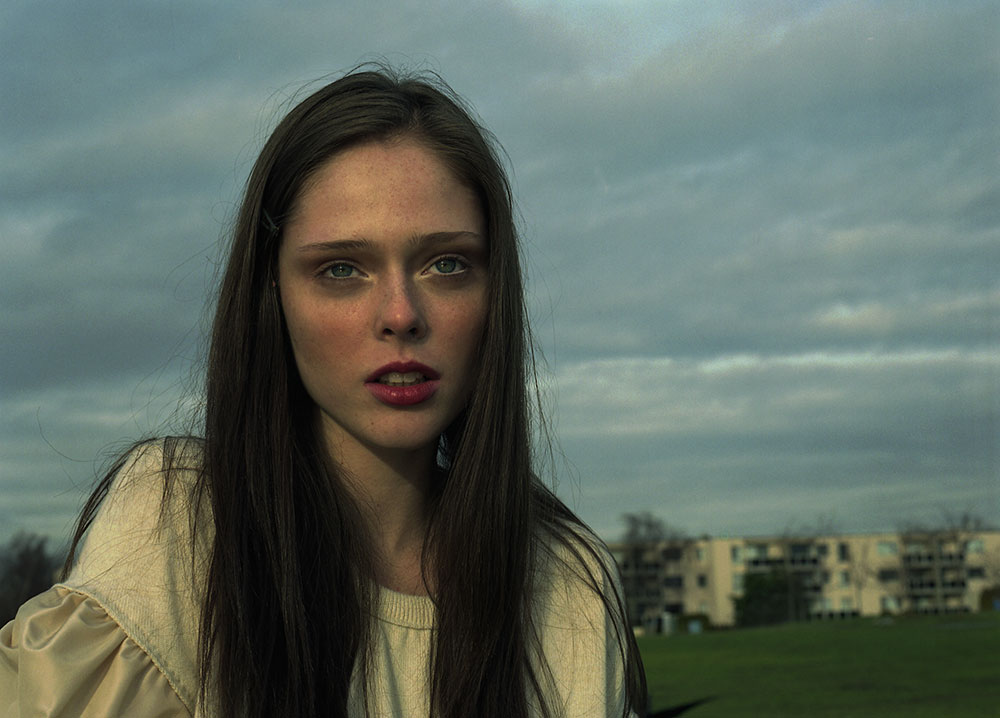 “MAC would send me on Pro Tours around Asia and Europe and North America. On one trip I was sent to the Cannes Film Festival, given a scooter and cell phone, and for two weeks I went from hotel to hotel doing house calls for celebrity clients. I was able to work with Alexander McQueen and Vivienne Westwood and literally hundreds of shows in New York, Milan and Paris, along with projects for the Oscars and MTV. It was challenging work being ‘on’ 24/7 and the reality is that although I’ve travelled the world, on those trips I rarely saw more than a hotel room and the inside of a studio.” 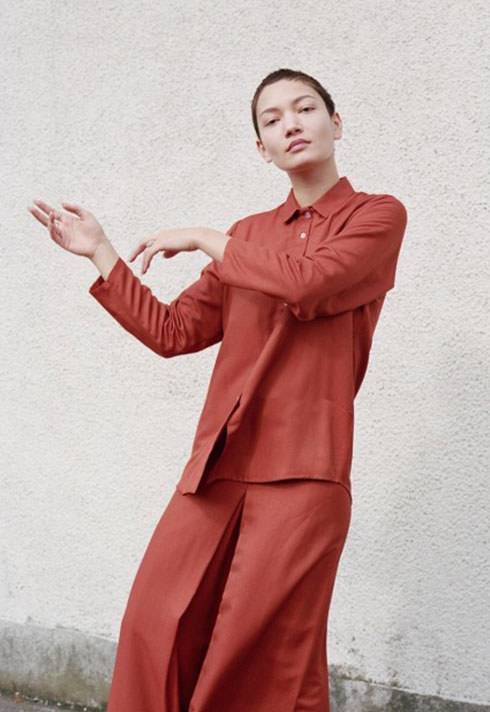 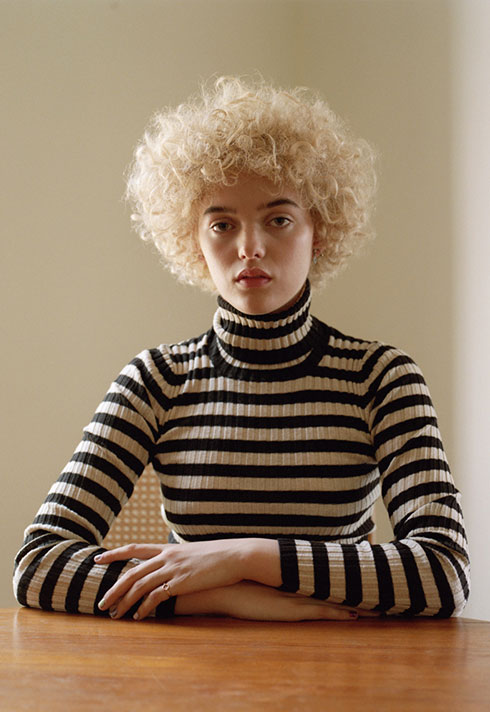 Jon parted company amicably with MAC and settled into life as a freelance fashion Makeup Artist in New York. With a hectic schedule and young family (“We were juggling too many things and wanted to be closer to family.”), Jon took the decision to return to the city, and the school, where his adventure had begun.

“Education has always been a part of what I do. If I was going to be training anywhere it would be the school where I had my start. Blanche Macdonald had grown and the curriculum had developed so much since I was a student, but there were still all these lovely familiar faces. This school has a family-like feel to it and the instructors really enjoy spending time together. One of the unique things about Blanche Macdonald is that the instructors aren’t just ending their careers as instructors. They’re Artists who are actively involved in the fashion and film industries.”

I’ve always been ambitious. I wanted to learn more, do more and experience different things.

Jon’s schedule as a top runway Makeup Artist hasn’t slowed down since his return to the Pacific Northwest.

“I was working with Raif Adelberg on a look book for his AW/13 Collection in Whistler when he let me know that Details Magazine had approached him to do his first show at New York Fashion Week. Of course, I had no hesitation in getting on board.”

“I could have assembled a team from New York, but I knew the strengths of artists here in Vancouver. I put the idea to Win and Oz and felt confident with the team. It was a menswear show, and Raif wanted to create something impactful and Makeup-heavy, but not feminine. The challenge was to create something powerful and directional without compromising the masculinity of the collection.

This recent New York excursion wasn’t a one-off. Jon understands the level of talent here in Vancouver. It’s the reason for the growing success of his own Artists’ Agency, NOBASURA. 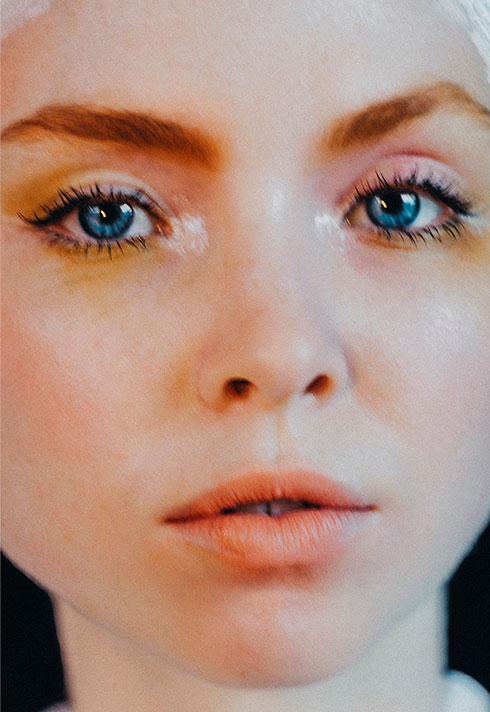 “There’s a phenomenal amount of talent in Vancouver, not just within NOBASURA. The creative community felt so abundant but so fragmented. I was working with a number of creative groups, and met all these people who had so much in common but didn’t know each other. I left a previous agency to focus on my own professional growth and needed someone to manage my business, so I hired my sister. Artists in other areas saw what we were doing, wanted to be a part of what was evolving and we expanded organically into other categories – Hair, Wardrobe, Prop-styling, Photography. Now we’ve added a roster of models. I wanted someone on the front line who could communicate with Art Directors, clients and photographers the same way that I would. That’s why I brought in my partner, Anna Bonthoux. Now she runs a successful Production business under the NOBASURA umbrella. What we collectively create is relevant on a global scale. I’m not a puppet-master, but I like putting the pieces of the puzzle together to produce a beautiful picture.”

Vancouver is a beautiful place to be based and also a global destination for shoots.

Jon calling Vancouver’s potential “globally relevant” isn’t hyperbole. His own travels as a top runway Makeup Artist prove that the city can be the launch pad for international superstardom. That’s why he’s happy sticking around.

“Artists travel out of Vancouver to every major fashion market. Vancouver is a beautiful place to be based and also a global destination for shoots. I’m seeing an increasing number of people flying from Vancouver for work but still calling the city home, which can only feed the creative community. We once lost creative talents to larger markets, but now they’re starting to come back. Tyler Udall is a great example of that.” 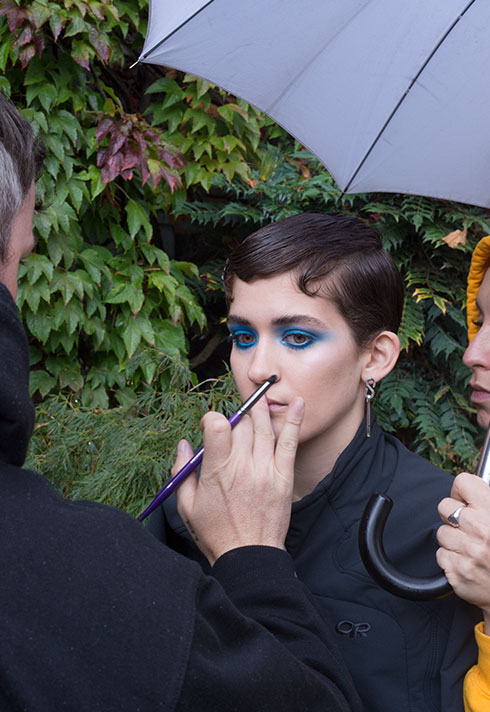 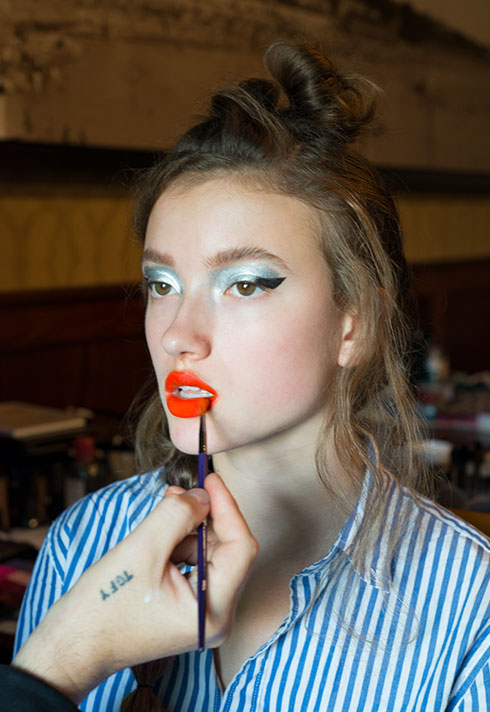 Blanche Macdonald students and International Fashion Designers are both reaping the benefit.

“As a Makeup Artist you have to know how to run a successful business,” he smiles. “Putting a brush on a face and creating art is the easy part.”

Jon’s credits are so impressive, and so lengthy, they deserve a section of their own. Here are just a few of his personal highlights…