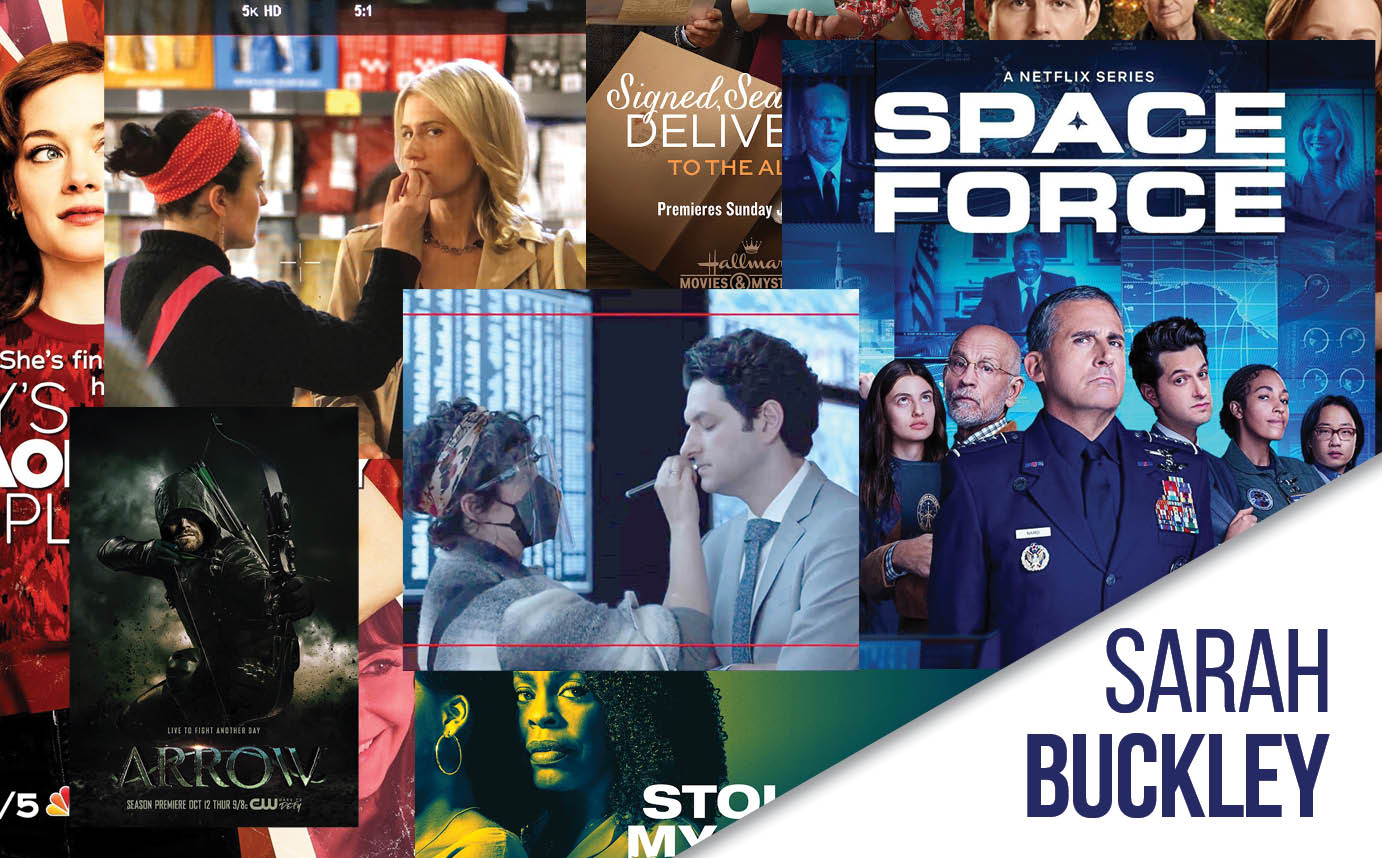 Not every Makeup Artist can pinpoint the precise moment they realized that creating faces would be their vocation. But not every Makeup Artist is like Sarah Buckley, whose unique journey from her home in Dublin, Ireland to the sets of Arrow, Zoey’s Extraordinary Playlist, Beverly Hills 90210 and The Mighty Ducks: Game Changers began with an innocent late night chill in front of a vintage horror movie.

“When I was 18 I had amazing energy,” she recalls with a smile. “I came home from work and was trying to unwind. I’ve always loved old movies. The Phantom of the Opera [that’s the 1925 version, film buffs] was on TV and I figured a silent movie wouldn’t wake my Dad up. There’s a scene when the heroine sneaks up and takes the Phantom’s mask off, revealing his face. That scared the crap out of me. I jumped four feet in the air. That was the first time I saw how makeup could have this huge effect. I’d seen gory horror films before, but in a movie without words, seeing his face for the first time was shocking.”

The seed had been planted, but it took a decade and a half (and a transatlantic relocation) before the idea blossomed into reality.

“I moved to Canada on a whim. The plan was to land in Vancouver and work my way East, but the minute I saw the mountains I had this sense that I was home. I knew I couldn’t leave.”

Sarah was 33 years old when she realized that a career in Makeup was a realistic proposition.

Blanche Macdonald trains Makeup Artists really well. I knew exactly what to expect going to set on my first day.

“I didn’t have a fixed goal when I came to Blanche Macdonald. I just wanted to be a Makeup Artist. Our teachers were all so lovely. Sandra Anderson taught us fundamentals. She had wonderful stories and was great at explaining ideas. Tracey Payne was genuinely easy to approach any time you had a problem. Her door was always open. I loved that the people teaching us were in the industry. Jen Folk was one of our teachers. Now she’s Head of Department on Charmed. These days I run into my teachers on set and we act like colleagues, which I love.

“I already had a job at MAC, which I enjoyed, when we started the TV and Film module with Janella Churchill. That was the turning point for me. She came in, seven months pregnant, and asked who was interested in film. We all put our hands up because we were all super eager. She started explaining what film was like and at first I thought, who would want to do that? 18-hour days? Standing around in rainy, cold woods at 2am? Then she explained how often they feed you. It turns out I’m very motivated by food! I was like, ‘Wait, there’s a chocolate tray?’”

Inspired by the promise of endless sweet treats, Sarah started searching for opportunities and, while still a student, landed a role for herself as Second Assistant on retro thriller Summer of ‘84.

Makeup skills will come the more you practice, but being able to pick up on people’s non-verbal cues is what will get you deep into the industry.

“I was doing background. Everyone had to look like they were from the 1980s. Suddenly, the Head of Department, Kita Nahanni, handed me an actor bag and said, can you look after this kid? She ended up making me her Additional First! I discovered that Blanche Macdonald trains Makeup Artists really well. It’s so much more than knowing how to do a great eyeliner. I knew exactly what to expect going to set on my first day.”

It didn’t take long before Sarah’s skills and charm were winning fans at the highest levels of Vancouver’s Film and TV Makeup community.

“Arrow was my first union show. I was day calling and I was so excited. The Head of Department was Tanya Howard and I can still remember introducing myself to her. She was so lovely. After that one day Tanya would call me again and again, asking me if I was a full IATSE union member yet. When I finally said yes we instantly started working together on The Mighty Ducks.”

Quick with a joke while always being aware of her situation, Sarah’s ability to win friends while remaining professional is at the heart of her rapid rise through the industry.

“You never know what actors are going through. You have to be able to read if they want to talk or not, or what they want to talk about. Makeup skills will come the more you practice, but being able to pick up on people’s non-verbal cues is what will get you deep into the industry. You have to get along with people.”

The chocolate tray proved as alluring as Janella had promised, but it’s the ever-changing creative challenge that keeps Sarah inspired to go to work every day.

“On Summer of ’84 I was doing 1980s makeup, blood and dirt. On a Hallmark movie I’ll do polished makeup looks. Then on a commercial I’ll put soot on a fire fighter or rosy cheeks on Santa. There’s never repetition and I love that.”

There’s also the pleasure that comes from working alongside great actors, be they stars or personal heroines from Sarah’s formative years.

“On The Mighty Ducks I worked with Emilio Estevez, who is lovely and so funny. I did two weeks on Beverley Hills 90210, which was insane, because I watched that show as a kid. .

“One of my absolute favourite moments came on a Hallmark movie called It’s Christmas, Eve. I saw that Gwyneth Walsh was on the cast list. I’m a huuuuge Star Trek fan, and Gwyneth played one of these famous Klingon characters, the Duras Sisters. I said nothing, even though we talked every day as I did her makeup. In our third week together the Hair Assistant asked her if she hated us fussing over her. I said, ‘It’s better than some things you’ve worn.’ Gwyneth shot me a glance and I revealed her secret. ‘I know you’re a Duras Sister!’ She was howling with laughter!”