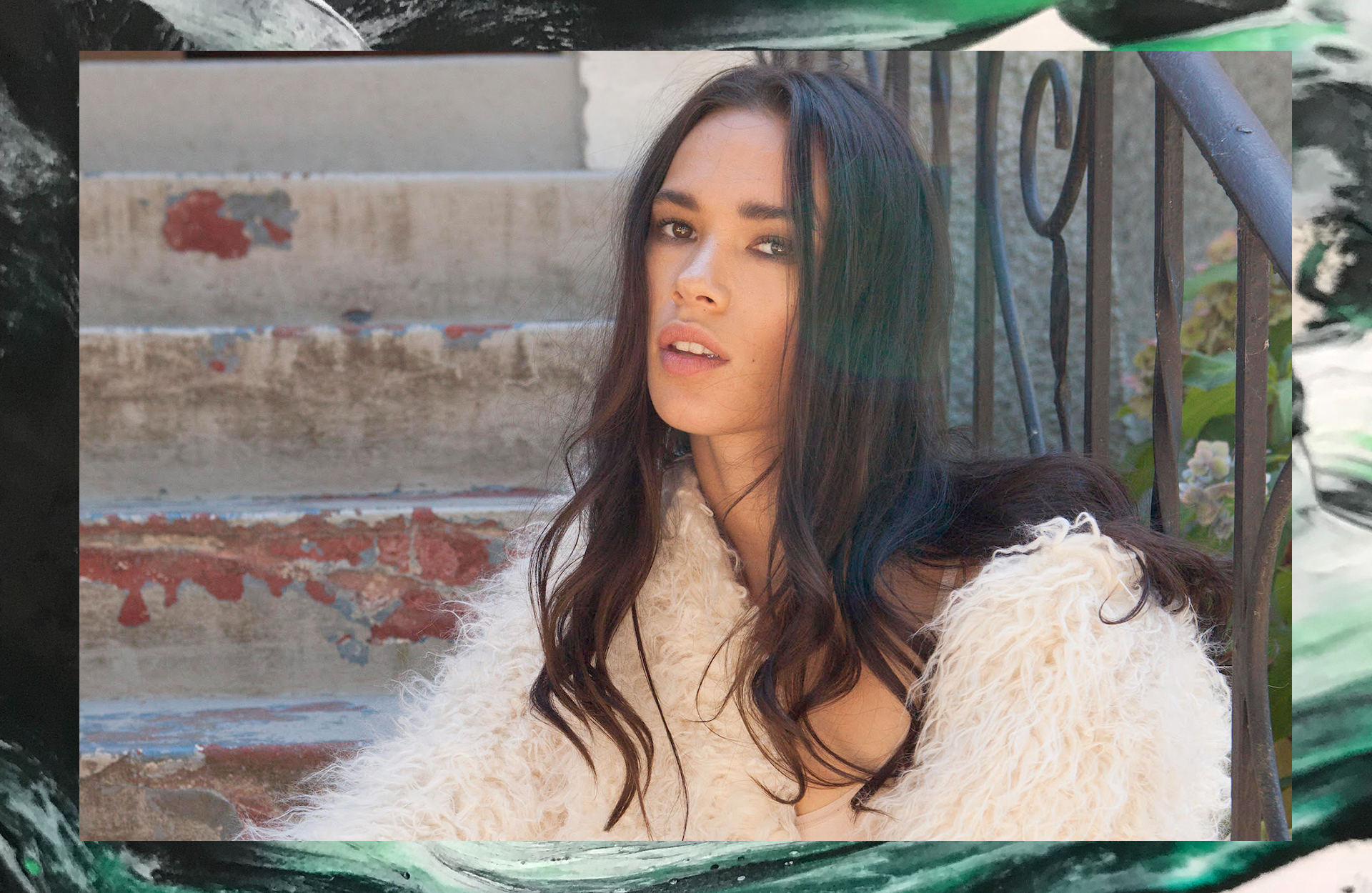 Students in Leah Elliston’s classes at Canada’s Top Makeup School receive more than insider tips and techniques from an Artist regularly creating magic backstage at Fashion Weeks around the world. They’re also getting daily shots of inspiration from a Makeup Artist whose passion for fashion continues to swell.

“Working at a big show is amazing,” insists Leah. “It’s hectic and there’s pressure, but it’s always exciting. When I see the models in the clothes, makeup and hair, that’s everything to me. If it’s a collection or a designer I love, I’ll still get goose bumps. I worked on a Mary Katrantzou show in London two years ago that was absolutely stunning. The intricacy of design was so beautiful. The talent you’re working with across the board at a Fashion Week in London, Paris, Milan or New York, from the designer to the Makeup team, is ridiculous. It’s so cool to be a part of that.”

Leah’s awe-inspiring résumé is a reflection of a life that regularly takes her away from her Vancouver home. Among its many highlights are her stints working at various Fashion Weeks for names and brands like Roberto Cavalli, Vivienne Westwood, Giambattista Valli, Salvatore Ferragamo, Simone Rocha, Balmain, Temperley London and Chloé. Away from the runway she’s brought her artistry to the Juno and Leo Awards, the Canadian Country Music Awards and the Toronto International Film Festival (where she groomed stars included Forest Whitaker, Kevin Spacey, Josh Groban and James Taylor). Somehow she finds the time to document her work and her views on today’s trends at her blog, Smudge Style. All of which make clear that Canada’s Top Makeup School students are in the presence of Makeup royalty. 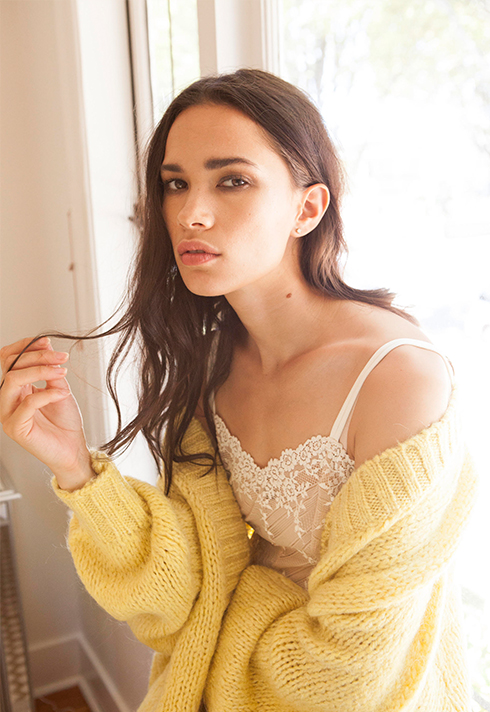 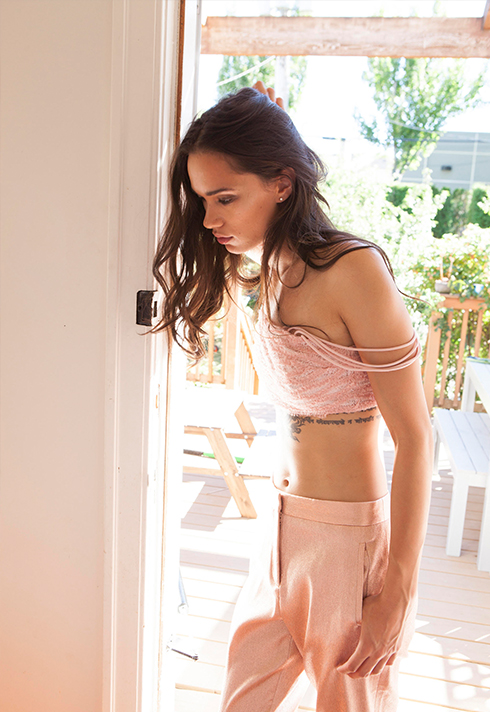 There was an artist dwelling inside Leah from an early age. She’ll cheekily remind anyone asking that the proof of that latent talent arrived when she was a six year old growing up in Nottingham, England.

“I won an award!” she laughs. “When Prince Charles and Princess Diana got married my school held a painting competition. From the entire school, I was the winner! My prize was a cup sent directly from Buckingham Palace!”

How did I get good? I practiced, practiced and practiced. That’s what makes you learn.

Despite this royal endorsement Leah had no plans to become an artist. After her family immigrated to Canada, Leah’s primary aim was to return to the UK and work at an art gallery. Thankfully, fate had other plans.

“I wasn’t interested in makeup at all,” she explains. “But while I was taking an art history diploma program I started working at The Bay Downtown handing out fragrance samples. There was a MAC counter there, and the girls there would always compliment me on my outfits. This was the 1990s, when there were only two MAC counters in Vancouver. Which meant that the Makeup Artists there were beyond busy. They suggested I applied for the job as cashier. I told them I didn’t know anything about Makeup but they didn’t seem to mind. It was only once I’d started working that I could see that MAC was a pro line with a direct connection to the fashion industry, along with incredible artistry involved. That made me want to stick around and learn more. 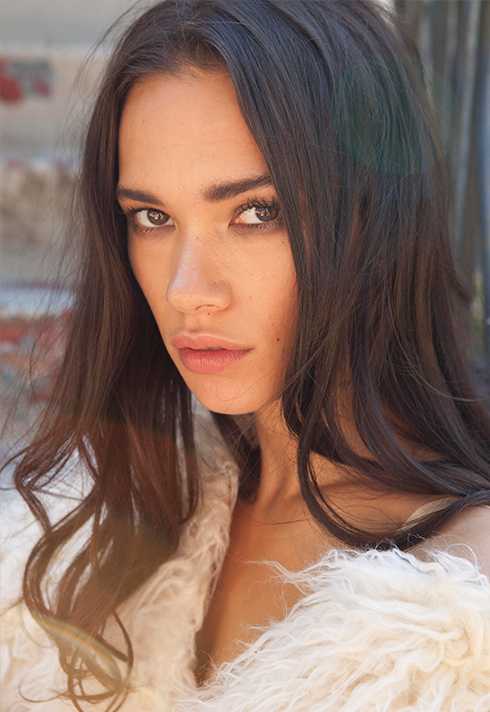 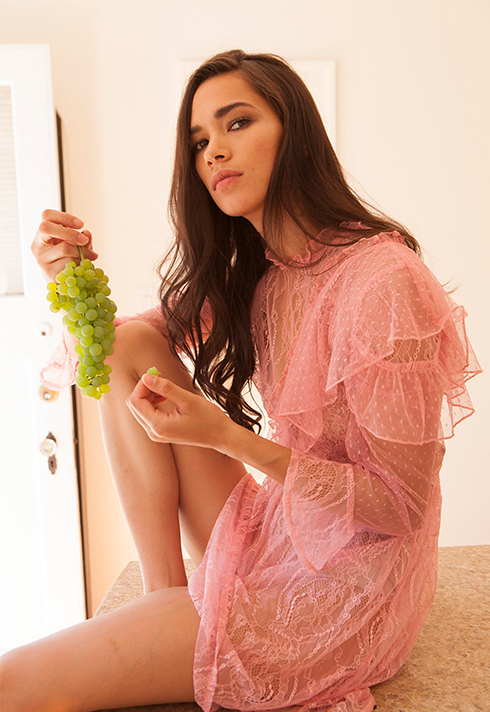 “I started going to all the training seminars that the rest of the team attended. It was like having a paid internship. Two years later I started working as a Makeup Artist for MAC at The Bay in Metrotown.”

Leah would be the first to admit that the transition from Cashier to Artist wasn’t easy, and that these days the leap would be impossible without formal training at Makeup School. But there’s no secret to how she overcame her initial nervousness.

I was working with the biggest artists in the industry, assisting and learning with people like Val Garland, Wendy Rowe, Aaron de Mey, Tom Pecheux and Charlotte Tilbury.

“How did I get good? I practiced, practiced and practiced. That’s what makes you learn. The experience you get in a retail position is completely different than if you go straight from Makeup School to working on actors or models. I loved the artistry and the challenge of working with all skin tones and ages. And after three years of practice I became the Resident Trainer for MAC at Metrotown in Burnaby!”

Leah had lodged her foot in the door of the Makeup business. One more opportunity was all that was needed to kick that door down.

“A Senior Artist position at MAC became available for a year as someone was going on maternity leave. I applied and got it! That changed my career. When Aerosmith came to Vancouver my job was to put on black eyeliner on Steven Tyler. He was very flirty! I was suddenly doing high profile events like the Juno’s, Canadian Country Music Awards, and the Toronto International Film Festival, where we would go from hotel to hotel before the stars would do their media appearances for shows like Extra and Entertainment Tonight. Kevin Spacey has a very dry sense of humour. It’s hard to tell if he’s actually upset or just playing. 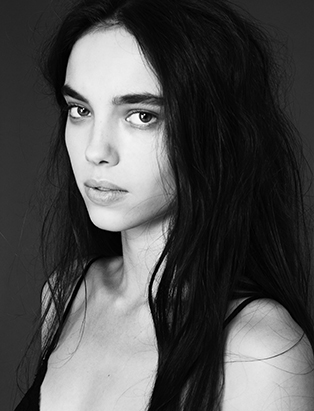 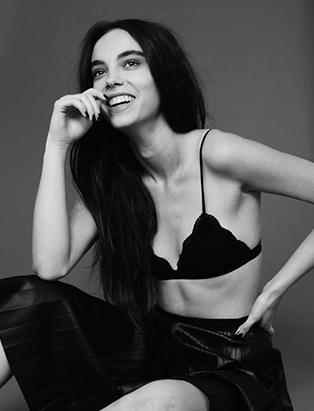 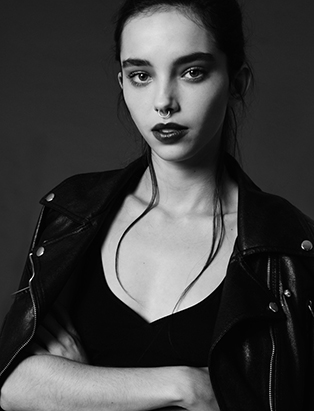 “I started going to collections in Paris and Milan. That first year I did Salvatore Ferragamo and Roberto Cavalli in Milan. It was amazing! I was working with the biggest artists in the industry, assisting and learning with people like Val Garland, Wendy Rowe, Aaron de Mey, Tom Pecheux and Charlotte Tilbury. I kept going back to these Fashion Weeks and since then I’ve had models like Jessica Stam and Freja Beha Erichsen in my chair. Freja was for a Balmain show in Paris. She appeared in that night’s newspaper wearing my Makeup. I still have a copy!”

The yearlong job covering maternity leave ended, but Leah continued to travel from Vancouver to London, Paris, New York and Milan, freelancing alongside her new position as MAC’s Trainer for Western Canada. Looking for a role that would give her the flexibility to continue working at the major Fashion Weeks and inspire a new generation of Artists, Leah approached Canada’s Top Makeup School

“I would go to makeup schools in Vancouver with MAC, giving seminars and showing the trends for the upcoming season. Blanche Macdonald always seemed the most well rounded. The criteria to be an instructor here was at the highest level. All the instructors were working Makeup Artists in the film or fashion industry. They were all my peers. So naturally, Blanche Macdonald was the first place I called.”

Students in Leah’s Makeup for Fashion classes have been reaping the benefits ever since, getting first hand looks at the face charts she’s used for some of the world’s most prestigious runways and having a ringside seat for the backstage tales she’s always excited to share.

“I’m the storyteller! Like the time I was in London at a Giles show, passing beads to a seamstress who was finishing embellishing a dress as the show was beginning, or when I spent the day working with Ellis Faas and ended up hanging out with Giambattista Valli’s Mamma at his atelier in Paris!”

Those stories keep coming as Leah continues to journey to the pulsating heart of the Fashion World. 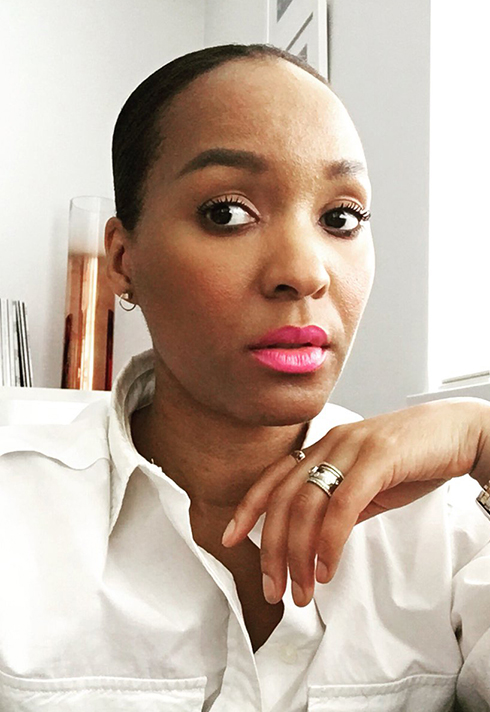 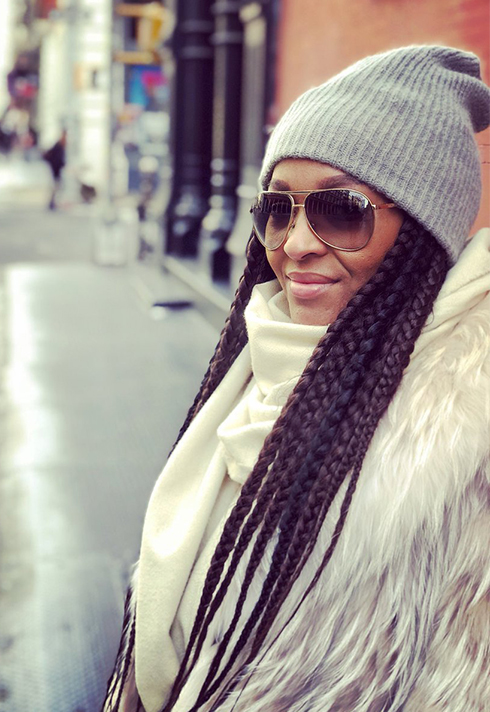 “I work a lot with Grace Lee now. We met at MAC and we’ve been great friends ever since. When she was hired as Lead Makeup Artist for Maybelline Canada she asked me to come join her as her First Assistant. We’ve done a lot of shows together in New York and Toronto.

“Grace and I have both been working a lot with Public School recently. That’s a cool label. We’ve done their New York show for the past three seasons. They used to be designers for DKNY so there’s always a lot of media at their show and a ton of models – around 45 or 50. As First Assistant my job is to make sure everything gets done. It seems like an organisational job but I need to know the Makeup look as well as the Key Artist knows it. If Grace is busy, and she usually is, I’m there to make a decision about what’s right and what’s isn’t. When you’re a First Assistant you’re the Key Artist’s right hand. You must be able to predict what they might need at any given time without being asked. You need to know when to take initiative and when to step back.

“This year we did their show and a cover shoot for Fashion Magazine with Jourdan Dunn the very next day. She’s such a pro! You get the shots so quickly with her. It looks easy, until you take 20 selfies trying to get a good one!” 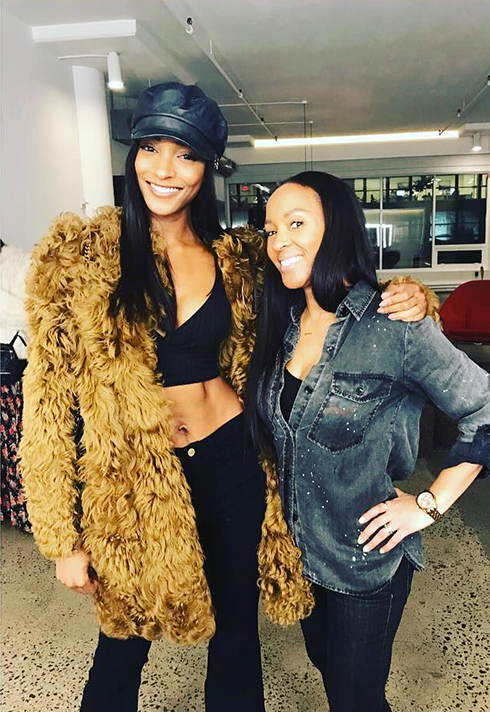 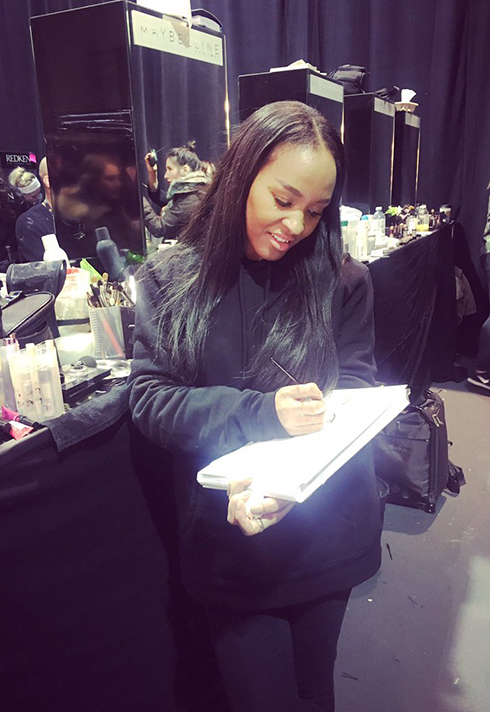 It’s an honour to learn from an Artist with Leah’s global experience and expertise. But she’ll be the first to point out that she’s enjoying her time in the classroom as much as her students.

“Seeing these new Makeup Artists grow creatively is inspiring. At first they’re copying what I’ve done. Then three weeks into the module I can see them creating their own looks. I love it when I can see that they’re interested and inspired by something, understanding what fashion is actually about. My first love was and still is fashion. My students will still tell me they love my outfit as much as they comment on my Makeup!”